There have already been a couple of unofficial Android 4.3 ROMs leaking for Galaxy S4 Google Play Edition and the Nexus 4. What about last year's flagship, the Galaxy S3? According to recent rumors, Samsung might skip Android 4.2.2 on S3 and a few other devices and jump directly to Android 4.3. Today we see Android 4.3 Samsung Galaxy S3 being pictured, just one picture which shows last year's flagship apparently running the latest in Android OS that Google has to offer. 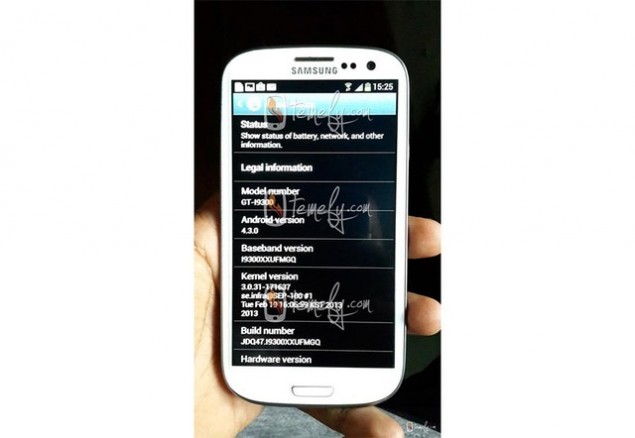 Google is yet to announce Android 4.3. Since last year there was speculation that the next version of the OS is actually going to be called Android 5.0 Key Lime Pie. It seems now that Key Lime Pie isn't just around the corner. In fact, it is being said that Android 4.3 is more of an incremental update as it doesn't bring any substantial changes. That remains to be seen. Google has invited the press for an event on July 24th, we hope that it will formally announce Android 4.3 there. As far as Android 4.3 Samsung Galaxy S3 release is concerned, the list of devices that will be able to run the upcoming update is yet to be circulated. However, Galaxy S3 is more than likely to get it, given that it has the required hardware specifications, and then some.

As of now there's no additional information available regarding Android 4.3 Samsung Galaxy S3 release. This image that you see was received by Temefy from someone based in Samsung R&D India. The source has reportedly not provided any more details or pictures that clearly reveal Android 4.3 Samsung Galaxy S3 in action. This particular update is expected to have a number of under the hood tweaks, including but not limited to crucial bug fixes and performance improvements.

The Galaxy S3 is one of the best selling Android smartphones to date, it is used by millions of people around the world who are no doubt anxiously awaiting the release of Google's latest mobile OS version. It remains to be seen exactly when Android 4.3 starts to be rolled out, we expected more details to come are way at Google's July 24th event.