AMD's next-generation, Zen 3 based, CPU lineup for desktop, codenamed Vermeer, has just leaked out. So this is a combined leak from Igor and Videocardz. Igor recently posted a bunch of details about AMD's upcoming Ryzen 4000 series for desktop - Vermeer - and WhyCry supplemented the leak with his own information.  Unlike Renoir which is built for the mobility platform and based on Zen 2, AMD Vermeer is the true successor to the Ryzen 3000 series out on desktop today. This leak also confirms the existence of a mammoth 16-core based on Zen 3 built for the mainstream desktop market.

AMD's Ryzen 4000 'Vermeer' lineup for desktop is an absolute powerhouse: Zen 3 based CPUs with up to 16 cores / 32 threads on the AM4 socket

We have already heard some extremely tantalizing things about Vermeer including a huge IPC gain and the iterative performance far outpacing Intel's 14nm on both compute and gaming sides. Vermeer will be manufactured on TSMC's 7nm process (likely EUV) and will be a big step up from current generation Zen 2 processors. It looks like nothing can stop AMD's rise to dominance in the x86 market.

In case you are wondering, the primary difference between Renoir for Desktop and Vermeer for Desktop is that the former is an APU platform while the latter is a CPU-only platform. Vermeer will not feature an iGPU and will, of course, be based on Zen 3 cores. Renoir also represents an interesting experiment from AMD as it is their first venture into high-end APUs and probably why they are aiming first at the budget market with Zen 2 and vega-based iGPUs. The real cherry on top for the ultra enthusiast and the professional market is going to be the Zen 3 based Genesis Peak which will succeed the current Thread Ripper series. 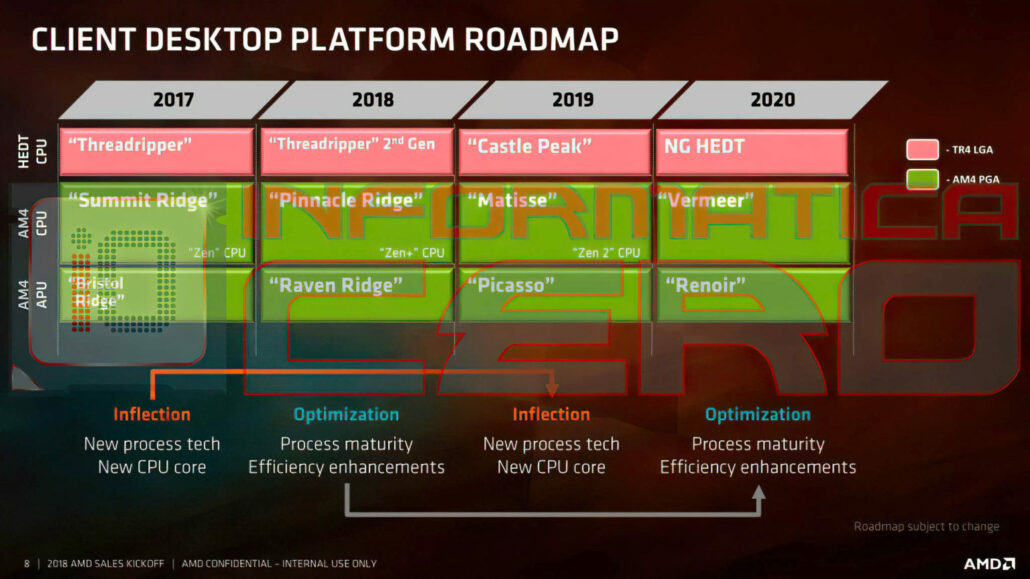 According to the sources, exactly 4.6 GHz boost clock and 4.0 GHz base clock are hidden behind the number sequence 46/40 on the eight-core, while the 16-core is also listed with 4.6 Ghz boost and only 3.7 base clock. These values are of course anything but final and one could expect the predicted clock increases for the A1 revision at the latest. How high these will be, is not yet known.

So once again, we are seeing a total of 5 OPNs leaked. Three of these are 8-core based parts and two of these are 16-core based parts. As I mentioned in our Renoir APU leak, OPNs have to be taken with a grain of salt as these are primarily for OEM use and may not translate to the consumer market on a 1 to 1 basis. That said, we will almost see at least a couple of these come to the retail market.

For the 8 core parts, the three listed variants  have a clock speed of up to 4.6 GHz. Interestingly, the base clock is set to 4.0 GHz - which is a pretty big number and should help in general speed up and responsiveness in general use. One variant has a maximum turbo of 4.4 GHz and 3.8 base clock.

The 16 core parts aren't lacking in frequency either. Both parts can clock up to 4.6 GHz and have a base clock of 3.7 GHz.  All of the OPNs mentioned have the A0 revision which means that you are looking at very early engineering samples and will feature a unified L3 cache. There was also some debate recently on whether these parts are going go to be supported on AMD's older chipsets and unfortunately, we still do not have a conclusive answer on that front although [speculation] it looks like older chipsets will not be supported [/speculation].