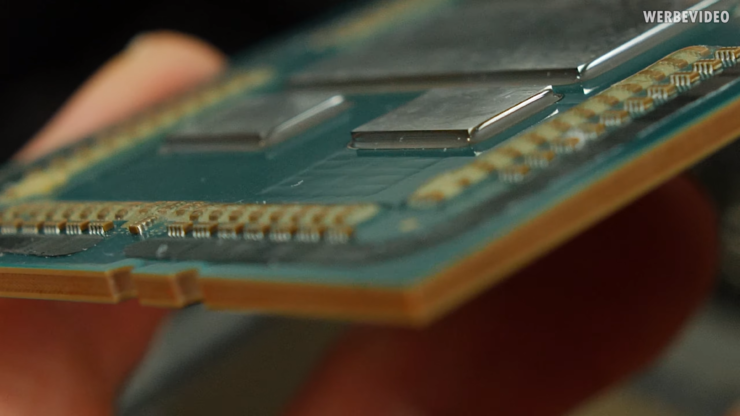 The AMD Ryzen Threadripper 3000 series processors are some of the best processors you can buy right now and you can expect their design to be the best-in-class too. Der8auer tested the delidded chip on a test platform that featured an ASUS ROG STRIX TRX40-E motherboard, a Heatkiller IV PRO water block which was equipped to a 360mm radiator with an EK pump/reservoir combo. First, the platform was tested without delid to get some stock values, temperatures for the 3960X which was overclocked to 4.3 GHz across all cores with a voltage supply of 1.392V. With this configuration, the chip peaked at a max temperature value of 86C in a run of Cinebench R20.

With the stock values accounted for, the chip was then delidded by first cutting the interface material between the IHS and the interposer with a razor blade. This was done to loosen the package for easier delidding. The CPU was put in an oven to soften the indium solder on the package. After heating, the IHS was removed easily off the package, unveiling its four CCD's and a singular I/O die in the middle.

Also what's interesting is that you can see the PCB traces for four extra dies on each Threadripper CPU. These could be interposers for the EPYC CPU being repurposed for the Threadripper design. The upcoming AMD Ryzen Threadripper 3990X 64 core would also be making full use of the PCB space with a total of 8 CCD's on the package.

The socket also requires to be entirely modified due to the height of the dies of the CPUs, which can end up colliding with the CPU cooler that can lead to permanent damage to the exposed cores of the Threadripper CPU. Thermal Grizzly's Conductonaut TIM was used on each die and the temps were similar to the stock ones, roaming around 85-86C. Roman explains that there are some issues with the mounting pressure that needs to be adjusted but for now, it is great to see that the direct-die cooling is indeed possible with 3rd Gen AMD Ryzen Threadripper processors.