We are almost past the third quarter of 2020 and it looks like this year entirely belonged to AMD Ryzen CPUs in the DIY segment who delivered astonishing sales figures compared to Intel's Core family of processors. As always, keep in mind that this is a single data source based primarily on DIY PC sales from a german retailer and may not represent the characteristics of DIY market or other market types (like prebuilts, OEM, AIB etc).

The latest figures come from Mindfactory who is a well-known name in our community as one of the largest German retailers of PC hardware. The sales and revenue statistics were shared by user Ingebor over at Reddit who compiles these results for each month and shares them over at the AMD subreddit.

The latest figures are for August 2020 which once again shows AMD Ryzen CPUs in an undisputed lead over the Intel Core CPUs. AMD's Ryzen CPUs which include their 2nd Gen and 3rd Gen parts accounted for 84% of the sales at the retailer or about 20,000 CPU units whereas Intel's 9th & 10th Gen parts only accounted for 16% sales with less than 5,000 CPU units. Based on the numbers, the AMD Ryzen 5 3600 was the most popular CPU followed by Ryzen 7 3700X.

Both of these processors exceed total Intel sales. Not only that but if we round up the figures for the higher-end parts which include the Ryzen 7 3800X, the Ryzen 9 3900X, and the Ryuzen 9 3950X, even those three parts are matching the combined sales of two Intel CPU generations. At the same time, it looks like not many people are going for the new Ryzen 3000 XT parts which launched just a few months back. This could be attributed to the higher prices and little performance gain over the standard X and non-X series parts which were also readily available and at a much lower price.

Moving on to the revenue figures which just like the sales saw the most coming in from AMD Ryzen CPU sales. AMD CPUs accounted for 81% of the revenue at the retailer or almost 5 Million Euros & Intel CPUs amount for 19% of the revenue or just over 1 Million Euros. Here we see the AMD Ryzen 9 3900X's revenue climb to the same levels as the Ryzen 5 3600 and Ryzen 7 3700X despite a lower sales volume which is mostly due to the higher price of the 12 core part versus the 6 core & 8 core SKUs. 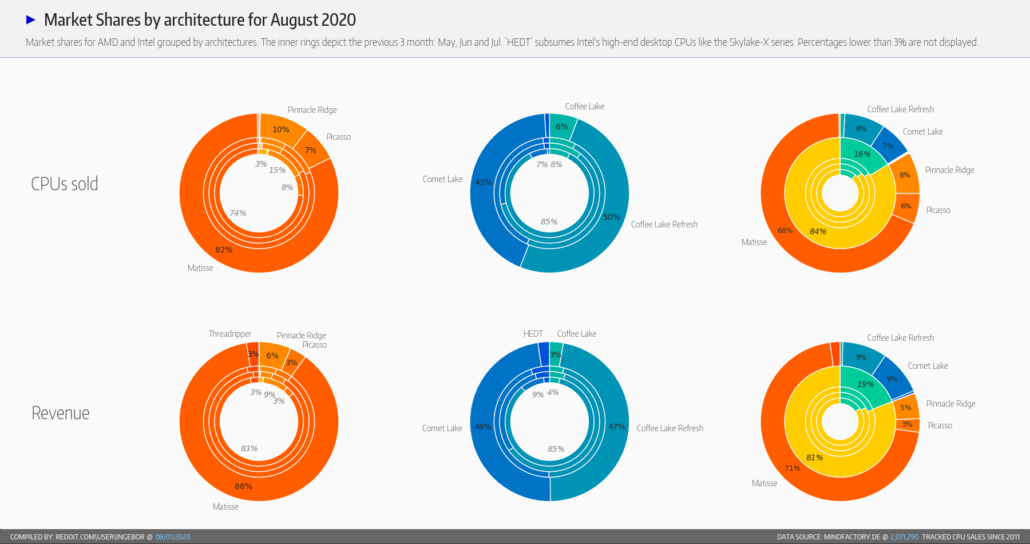 As for the CPU market share division, AMD's Matisse CPUs now account for 82% of the sales while the rest of the sales are older 2nd Gen Ryzen and 3rd Gen Ryzen APU parts. Ryzen Threadripper now accounts for 1% of the CPU sales. Intel's CPU share is still split between 9th Gen and 10th Gen parts with Coffee Lake Refresh taking up a larger chunk than the newly released Comet Lake CPUs. This could be due to the higher prices and low stock volume that has affected higher-end Intel 10th Gen CPUs. Intel's HEDT lineup accounts for around 1% of the CPU sales.

Another reason for the increased Intel 9th Gen CPU sales could be due to the price drop for 9th Gen CPUs which have seen a marked drop in the recent months. AMD CPUs have also seen price drops but they've slowed down just a slight bit for now. We can expect some massive discounts and price cuts in the coming months as AMD is all set to unveil its next-generation Zen 3 based processor family