Intel has officially launched their 14nm Broadwell based, unlocked Core i7-5775C and Core i5-5675 processors. Featuring support on the existing 9-Series chipset based motherboards, the new unlocked Broadwell CPUs will be the first 14nm consumer desktop processors featuring better IPC gains and a faster integrated graphics core that has 128 MB of embedded, fast DRAM. 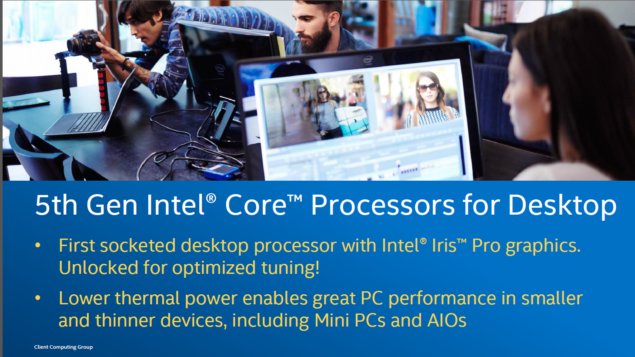 Intel is launching two chips today which include the Core i7-5775C and Core i5-5675C, both of which are part of the K-Series unlocked family. The Core i7 and Core i5 parts are going to feature a 65W TDP (Thermal Design Power) and the latest Iris Pro Graphcis 6200 iGPU which has eDRAM cache embedded to feed the execution units with faster memory for smoother execution process as opposed to the system ram which is limited in terms of bandwidth. Both processors are compatible with the Z97 chipset motherboards which are available since 2014 (Haswell Refresh) platform. Following are the details of the processors:

Starting off with the specifications, first is the flagship Core i7-5775C. The processor comes with a core clock of 3.3 GHz and 3.7 GHz turbo frequency. The chip is a quad core model with hyper threading enabled and features 6 MB of L3 cache, DDR3 memory rated at 1600 MHz native support along with the mentioned TDP of 65W.

The second part is the Core i5-5675C which is a quad core model with no hyper threading support and comes with a clock speed of 3.1 GHz base and 3.6 GHz turbo frequency. The model features 4 MB of L3 cache, DDR3 1600 MHz memory support and a TDP of 65W. Both chips house the Iris Pro 6200 iGPU which is a Broadwell GT3e model featuring 48 Execution Units, 64 MB of eDRAM (L4) cache and 128-bit memory interface. Clock speeds for the iGPU on both processors was not determined in the listed specs but can be expected around the 1 GHz mark.

Both processors will be supported by the Z97 chipset and LGA 1150 socket based motherboards which are readily available in the market. Motherboard makers have already started shipping out BIOS to allow support for the 5th generation of Intel Broadwell processors. The reason Intel may not be moving to more performance minded (95W) parts on LGA 1150 platform could be due to the upcoming Skylake processors which will be running on the Z170 chipset based motherboards whose production is underway and will be available by IDF 2015. While the processors are meant to offer an upgrade to the current desktop parts, they are not going to be a high-performance capable chip like the Devil’s Canyon which was built to handle higher overclocks and featured faster clock speeds. The replacement to Devil’s Canyon comes with Skylake-S in Q3 of 2015.

It was previously established by Intel during a demonstration of the processors during GDC 2015 that the sole intention of the new processors is to offer better performance to Mini-PCs and All-In-Ones with the latest BGA and LGA parts. While desktop socketed platforms do good an upgrade path to Broadwell generation, the main performance parts as expected with higher overclocking capabilities will arrive with Skylake generation.

Tomshardware is out with their comprehensive review of the Broadwell Core i7 and Core i5 processors. While there are gains in the CPU department, the most significant update came to the graphics side. The Iris Pro 6200 graphics chip featured on the Broadwell processors isn't just fast, it's the fastest integrated graphics chip ever to be released in the market and it is just a few FPS below the discrete Maxwell based GeForce GTX 750 card which is quite an achievement by Intel. If the same trend goes on, we can see some flagship iGPUs easily beat out the budget tier discrete cards. Do read the full review on Tomshardware for a detailed insight on the new chips.

Intel has also announced five new mobility high performance, Broadwell HQ processors which include the Core i7-5950HQ as the flagship. The chip is a quad core with multi-threading support, clocked at 2.9 GHz base clock and features the Iris Pro graphics 6200 chip that is clocked at 1150 MHz max clock speed. The chip features 6 MB of L3 cache aside from the 128 MB eDRAM on board for the iGPU and has a TDP of just 47W. The pricing is suggested at $623. Specification for the entire lineup are listed below.