The flagship AMD Ryzen 9 3950X is going to hit retail shelves this month, bringing 16 cores to the AM4 mainstream platform. The specific launch date for the processor was not announced yet but retail store Digitec which is based in Switzerland has listed the chip along with with the date when its sales commence.

The retailer has listed the AMD Ryzen 9 3950X processor and stated that sales start on 30th of September. They are not guaranteeing to deliver in September which is due to the fact that the sales start at the end of the month. The processor is listed for 999 Francs which may be a place holder for now since that equates to $1000 US which is much higher than the MSRP of $749 US. This is due to the fact that PC hardware is imposed with heavy taxation in the Swiss market. 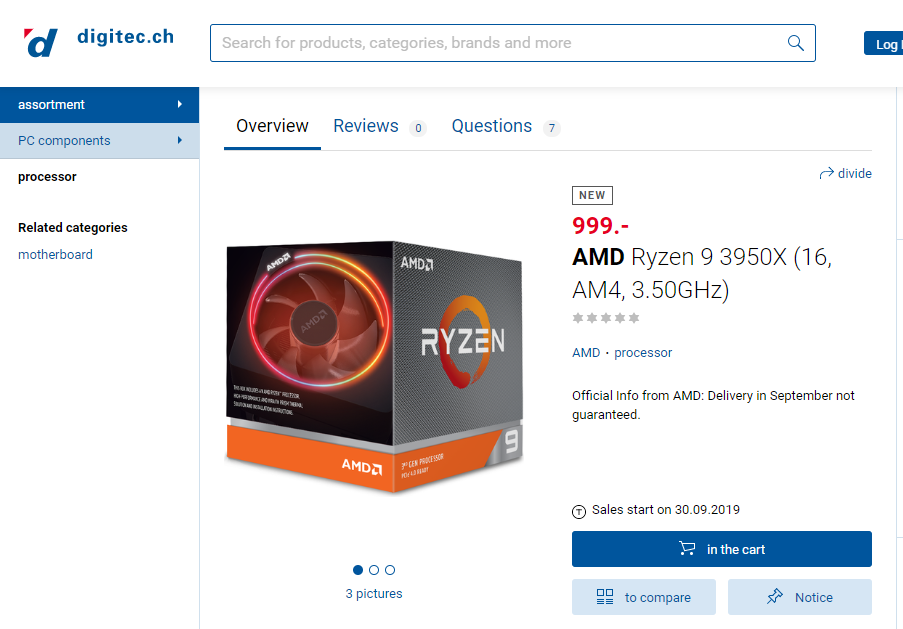 We have seen multiple performance leaks including world record overclocks with the processor. The AMD Ryzen 9 3950X will be the grandest mainstream chip ever created, offering an impressive core/thread count and blistering fast multi-tasking performance which rivals their competitors and even their own HEDT chips. Some records that the Ryzen 9 3950X broke include:

There are many people who have been holding out their new rigs in anticipation of the Ryzen 9 3950X. Of course, those looking for even better performance would be eyeing the upcoming AMD Ryzen Threadripper 3000 processors which are expected to offer disruptive performance and I/O features on brand new platforms. We will keep you notified when the processor hits the market.