AMD's next-generation Cezanne Ryzen 5000 APU has been spotted in the Openbenchmarking database with 8 Zen 3 cores and an enhanced version of the Vega GPU. Spotted by Coelacanth's Dream at Twitter, the APU seems to be a desktop part that is running on an internal test board for qualification and has been tested in the Xonotic test suite.

The AMD Cezanne Ryzen 5000 APU lineup is expected to launch close to 2021. A recent roadmap showed that it will be launching in early 2021 but we don't know if that's the mobility lineup or the desktop line. As for the leaked variant, it has the '100-000000263-30_Y' codename and features a total of 8 cores and 16 threads based on the Zen 3 core architecture.

The chip has a base clock of 3.6 GHz with the boost frequency currently unknown. We have seen early Vermeer samples hitting up to 4.9 GHz & considering that the Ryzen 7 4750G already hit a boost frequency of 4.4 GHz, a 4.5 GHz+ clock will be no biggie for Cezanne APUs. 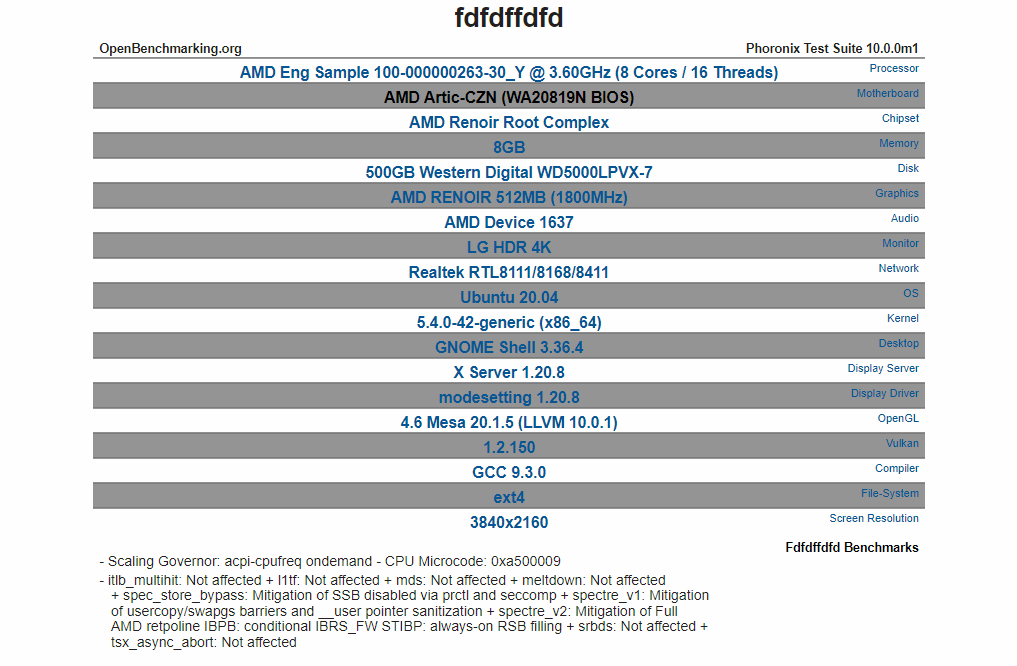 Coming to the GPU side, the APU features the same Vega revision as the Renoir APUs. It might get a slight enhancement on the advanced 7nm+ node with higher clock speeds. This specific variant was running at clock speeds of 1800 MHz.

The Ryzen 5000 APU was featured on the AMD Artic-CNZ test platform & is used to test all internal Cezanne APUs. There are a few benchmarks on the Ubuntu OS under the Xonotic test suite but the scores are lower compared to the Ryzen 7 4750G so we can assume that the iGPU drivers for this specific chip have not been finalized yet and that's expected since launch isn't close either.

So far, only the design of the Ryzen 5000 'Cezanne' APUs are confirmed and as we talked in our last report, the Cezanne generation of APUs will bring forward the new Zen 3 CPU architecture while re-using the Vega GPU architecture. The Cezanne family would be replacing AMD's Renoir Ryzen 4000 APU family which has been released on notebooks since April 2020 and will make its debut on the desktop AM4 platform in the coming months.