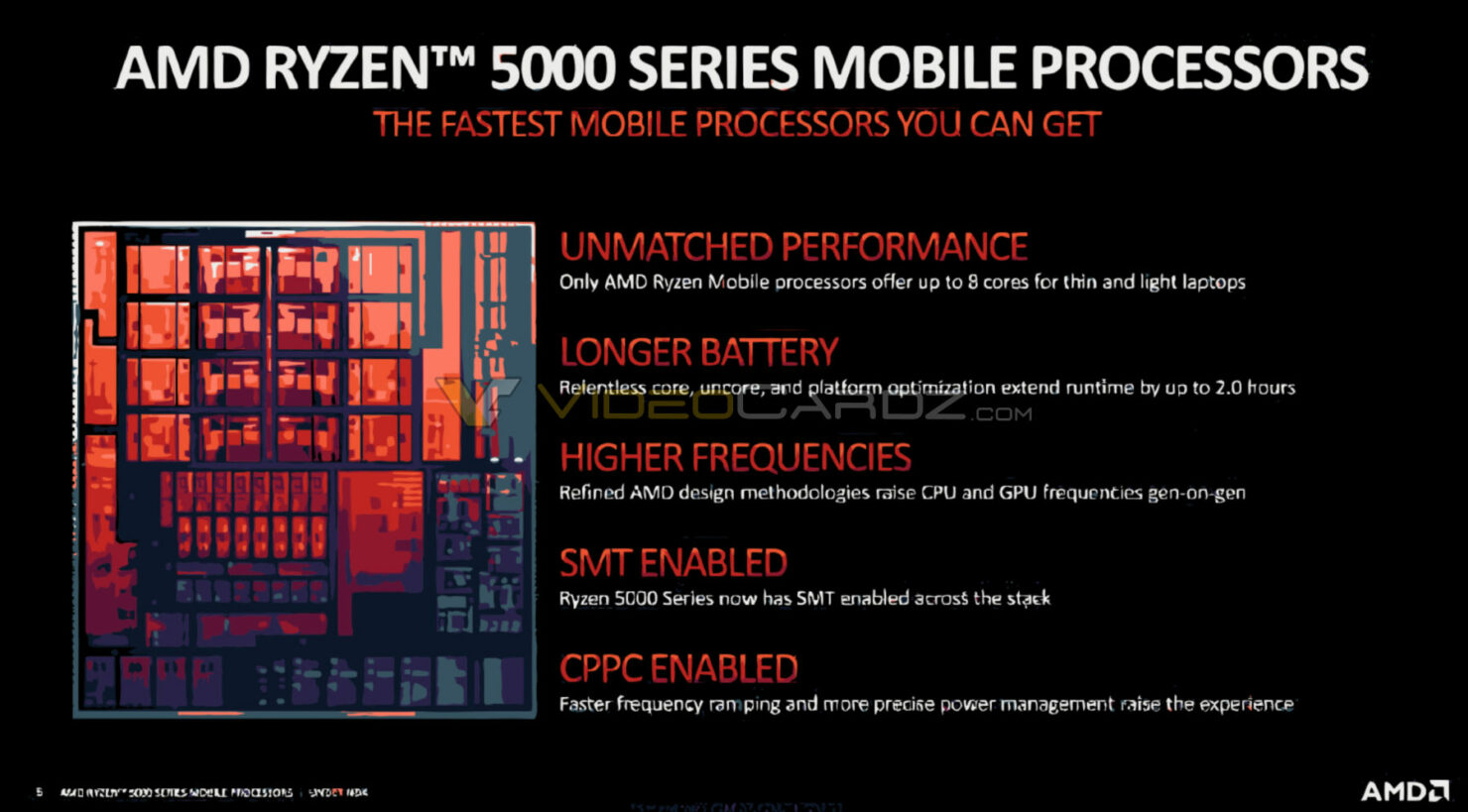 According to a massive leak posted by Videocardz, AMD is announcing their Ryzen 5000 series Cezanne mobility processors today. Cezzane is the successor to the award-winning Renoir family of APUs from AMD and is a series of processors that has been eagerly anticipated. The leaked slide deck not only contains details of various microarchitectural improvements over the last generation of mobility processors but also confirms that Cezanne APU will feature a die size increase of 15% over Renoir, clocking in at 180mm².

AMD's Zen 3 based Ryzen 5000 series mobility processors feature 10.7 billion transistors and are fabricated on TSMC's 7nmn process. They offer a 23% uplift in single-threaded performance versus the older Ryzen 9 4900H and will make AMD much more competitive with Intel's Tiger Lake in single-threaded loads. It features double the cache with a unified 8 core CCX and 16 MB of L3 cache which accelerates core communication and lowers latency. AMD is also claiming up to 2 hours longer battery life compared to the last generation and 19% more single-threaded performance than the Intel 10980HK.

The new Zen 3 based architecture features a single block of 16MB L3 cache versus two blocks of 4MB L3 cache in Zen 2. The single block of cache also feeds all 8 cores simultaneously as opposed to the last design where each block could only feed 4 cores. This improves cache accessibility and load distribution and reduces power while increasing bandwidth.

Power management has also been improved over the last generation (where all of the CPU VCore were pegged to the VGfx. With Ryzen 5000 series processors, the power management is more fine-tuned and each core can have a separate voltage and frequency irrespective of GPU load - which is similar to how desktop setups operate. This also includes the introduction of Deep Power states. Because of these changes, standby power has been increased by 20 hours, Idle time has been increased by almost 4 hours, video playback by 1.1 hours and general use case by 2 hours.

The Zen 3 based Ryzen 5000 series flagship features USB 3.1 and USB C support with 2x NVME SATA connections and one PCIe Discrete GFX connection. A 7nm Vega enhanced onboard with 8 compute units will offer the graphics horsepower and infinity fabric will offer seamless connectivity between the two. The iGPU can now sustain clock frequencies up to 2.1 GHz and reach 2.15 TFLOPs of GPU horsepower. Because of this the Ryzen 5800U can get a 171% higher graphics score than the original Ryzen 3700U.