An alleged AMD Ryzen CPU & APU roadmap has leaked out which reveals what we can expect from the next-generation line of processors powered by Zen 3 and beyond. The roadmap ranges from 2020 till 2022 and while it's still in a partial state, we can get a sense of where's AMD headed with its next-generation architectures and all the products we can expect in the coming year.

The roadmap was leaked by MebiuW in two parts and reconstructed by Videocardz to show us the planning that AMD has devised for its next-generation Zen products. There are definitely some Zen based products within the roadmap that we've heard about and some new families which are also mentioned so let's start off with the details. 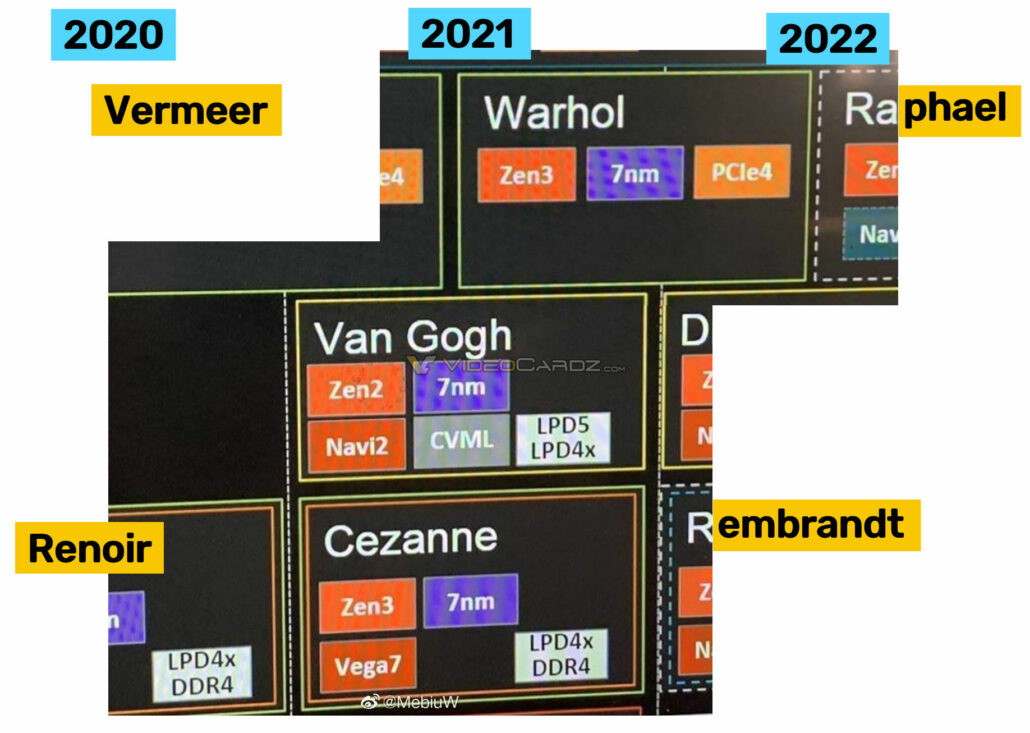 Starting off with Zen 2, AMD has released almost all of its Zen 2 based products. The Zen 2 lineup has had at least four product lineups with a fifth one launching soon. The full list of Zen 2 CPU and APU families include: 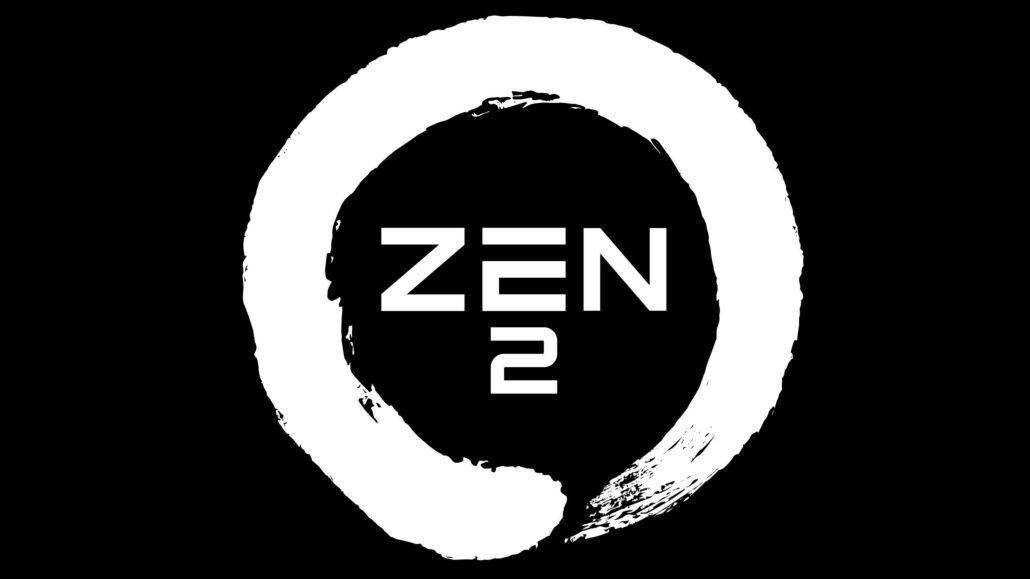 On the mobility side, AMD has the same Ryzen 4000 (Renoir) APUs powering the high-performance H-series and Low-TDP U-series variants. AMD also plans to bring a new Zen 2 lineup for launch early next which would be known as Van Gogh. Considering that these APUs launch close to the next-gen Ryzen 5000 APU family, they are expected to fall within the Ryzen 5000 series branding though that needs to be confirmed. You can learn more about Van Gogh in our post from yesterday where I go in more detail about the Tiger Lake-Y competitor.

Van Gogh is expected to be the last family of Zen 2 consumer CPUs to be available before AMD shifts over to its next-generation Zen 3 products.

Speaking of Zen 3, there are quite a lot of CPU families that are expected to make use of the next-gen Zen architecture. The roadmap shows at least four consumer-aimed families with EPYC Milan being the fifth lineup that is specifically aimed at servers. The full list of Zen 3 CPU and APU families include: 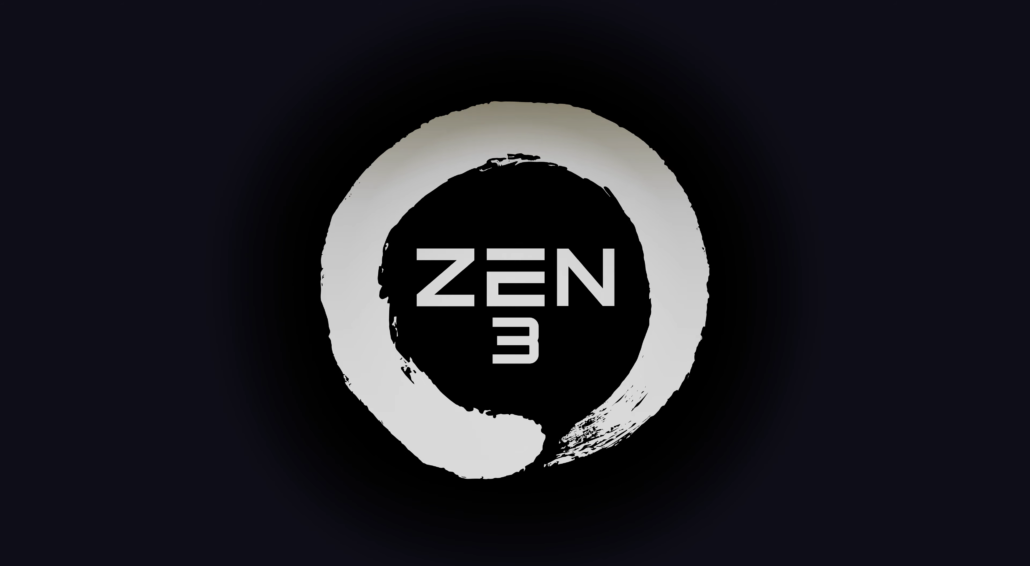 The only two families that AMD has officially confirmed so far to make use of the Zen 3 core are the 3rd Gen EPYC Milan and the Ryzen 4000 'Vermeer' series processors. The AMD EPYC Milan 3rd Gen server processors will be replacing the AMD EPYC Rome 2nd Gen CPUs. The AMD Ryzen 4000 CPUs for the AM4 desktop platform will be featured in the Vermeer family and replace all existing Ryzen 3000 'Matisse' processors.

Now there's some confusion as far as the naming scheme is concerned since recent rumors have stated that AMD plans to offer its next-gen Zen products under the same naming convention but based on the leaked roadmap, that seems unlikely unless of course, AMD makes similar decisions as to its existing product stack.

The main confusion is caused by the different branding schemes of the desktop and mobility lineups. AMD's 1st Gen Ryzen mobile parts launched under the Ryzen 2000 branding and the mobile series has always been one generation ahead in terms of the naming scheme than the desktop parts. The rumors state that AMD might move all of their Zen 3 based processors under the Ryzen 5000 branding but the main issue arises in the desktop segment where AMD is expected to launch at least two Zen 3 clients processor families.

AMD Ryzen Warhol CPUs, A Vermeer Refresh, or Something Bigger?

The roadmap shows that after Ryzen 4000 (Vermeer) CPUs land in 2020, AMD will be offering a second refresh in the form of Warhol around mid of 2021. The new Warhol processors will still utilize the Zen 3 architecture and feature an enhanced 7nm+ process node but unlike the Ryzen 4000 (Vermeer) CPUs, they could be featured on the brand new AM5 platform. The Warhol family may sound confusing but it is likely that the family will offer an early transition into the new AM5 platform which is going to bring some huge updates in the form of I/O and features.

AMD just can't have two different families aimed at two different platforms under the same branding and this is why it is likely that AMD sticks with its current naming path and goes on to call the Warhol CPUs like the Ryzen 5000 Desktop CPUs. Again, nothing is confirmed but we would like to hear more from AMD around CES 2021.

Moving on, we have the Ryzen 5000 (Cezanne) APUs which are confirmed to feature Zen 3 and 7nm Vega cores. The family will be supported by existing 500-series AM4 motherboards and will be the last APU lineup to be featured on the socket before AMD transitions into the next-gen of APUs. As for the next-generation, AMD's Ryzen 6000 (Rembrandt) APUs might be the first APU family to hit the AM5 socket. The Rembrandt APUs are likely to feature Zen 3 CPU cores along with second-gen and enhanced Navi 2 (RDNA 2) GPU cores. The Rembrandt desktop APUs will launch around early 2022 so the AM5 platform should be out by that time.

The reason why I believe that Rembrandt APUs aren't going to feature Zen 4 cores is that the EPYC Genoa (4th Gen EPYC) server CPUs are aiming to be the first Zen 4 launch and they being shipping around 2H 2021 and as AMD has already confirmed, Zen 4 is expected to hit the market by 2022. The successor to Van Gogh is also mentioned as Dragon's Crest and is reported to launch in early 2022 while featuring Zen 3  and enhanced Navi 2 (RDNA 2) cores.

Lastly, we have Zen 4 which is going to replace the entire Zen 3 core lineup in 2022. We have little to no details about the Zen 4 core design or architecture at the moment but it looks like aside from EPYC Genoa, the next-generation desktop client CPUs will be the first to feature the new core tech.

Codenamed Raphael, the AM5 Desktop CPU family is expected to be branded as the Ryzen 6000 series processors. Surprisingly, the roadmap also shows Navi (RDNA 3) IP in the Raphael section which may suggest that AMD could bring iGPUs to its mainstream desktop processors. They will still come in a chiplet package as opposed to an APU design. The Raphael family of Ryzen CPUs is expected to be introduced around mid of 2022.