AMD seems to be preparing a few new entry-level Ryzen & Athlon CPUs which will be based on the Zen 2 core architecture. These processors were discovered within the USB-IF database and include three new SKUs that are part of the Ryzen/Athlon 4000 family aiming at the desktop platform (via Komachi).

As per the listing, there are three new Zen 2 Desktop SKUs mentioned, the AMD Ryzen 5 4500, the Ryzen 3 4100, and the Athlon Gold 4100GE. Based on their naming convention, we can decipher a few specifications but what's important is that these are still part of the older 4000 series lineup & that has entirely been replaced by 5000 series SKUs. There are currently no entry-level Zen 3 SKUs in the 5000 lineups so these chips may act as a refresh for the Zen 2 based 3000 SKUs and offer a small spec bump. 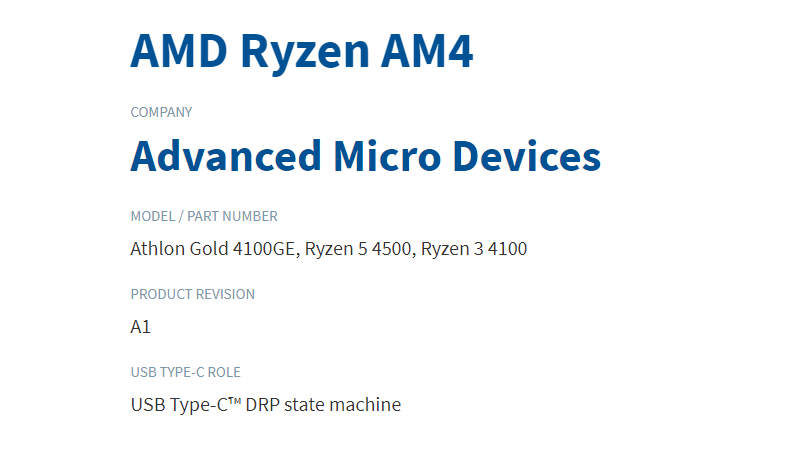 New AMD Ryzen & Athlon Desktop CPUs based around the Zen 2 core architecture have been spotted on the USB-IF database. (Image Source: USB-IF via Komachi)

The AMD Athlon Gold 4100GE will be the spiritual successor to the Athlon Gold 3150GE and come with 4 cores, 4 threads, and 6 MB of cache. The chip being a 'GE' variant will support a Vega (3 CU) integrated GPU and clocks of up to 4.0 GHz. The 'GE' variant will also feature a TDP of 35W so we can expect higher clocks on the non-GE SKU.

Now there's no word on the pricing of either part. The AMD Ryzen 5 4500 and the Ryzen 3 4100 should hit retail pricing of sub-$150 US while the Athlon Gold should hit retail pricing of sub-$100 US but the more important question is if these chips are going to enter the retail segment at all. It looks like this Zen 2 refresh is aimed at the OEM segment rather than the DIY market but we have seen certain OEM-only chips being sold in the DIY segment by certain Asian Pacific retailers so let's wait and see when these chips actually become available.