The embargo has yet to lift on AMD's Zen 2 based Ryzen 4000 notebooks but it looks like one of the reviews for a laptop based on the Ryzen 5 4500U slipped out by Overclockers.ua (Via Notebook Check). The review shows us a good representation of what to expect from the mainstream lineup of 3rd Gen AMD Ryzen 4000 CPU based products.

The product tested was an ACER Swift 3 S314-42 notebook which has yet to land on retail shelves but would be out later this month. The notebook features the AMD 'Renoir' Ryzen 5 4500 CPU that rocks 6 cores, 6 threads with a base clock of 2.3 GHz and a boost clock 4.0 GHz. The chip carries 8 MB of L3 and 3 MB of L2 cache and comes in a 15W package. The Ryzen 4000 U-series processors are ideally positioned against Intel's 10nm Ice Lake-U and 14nm Comet Lake-U chips. The Ryzen 5 4500U also comes with the updated and 7nm Vega 6 graphics core which features 384 cores and a graphics clock of up to 1500 MHz.

In addition to the CPU specifications, the notebook rocks 8 GB of LPDDR4 memory clocking in at 3200 MHz. There's 256 GB of Samsung M.2 SSD but no HDD option is listed in the specifications list. There also doesn't seem to be an extra M.2 slot on the PCB so the only option to expand the storage would be to replace the existing M.2 drive with something that offers higher capacities. Other specifications for the laptop include a 14" IPS display which supports a resolution of 1080p HD.

The I/O is pretty decent from the looks of it with the laptop offering USB 3.2 Gen 1 (Type-A and Type-C) ports which allow for DisplayPort or Power Delivery, USB 2.0, HDMI and audio output. There's also WiFi 802.11ax and Bluetooth 5.0 support. The laptop weighs 1.19 kg to be exact and should cost around $700 US. 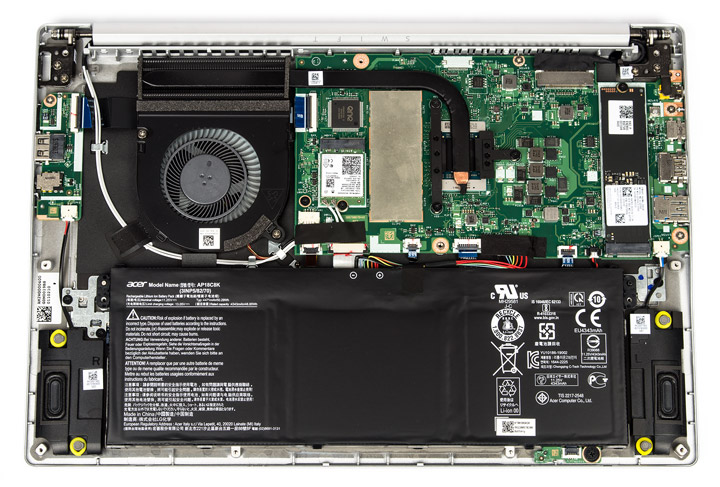 Notebookcheck put up a nice effort in comparing the notebook with a similar priced Intel solution based on the 8th Gen Core i5-8250U which features 4 cores and 8 threads. According to the tests, the AMD Ryzen 5 4500U is up to 50% faster than the Core i5-8250U which is also a 15W part. The newer Intel Core i5-10210U or the Core i5-10510U and even those based on Ice Lake-U weren't compared but one can conclude that the higher clock speeds of the 10th Gen Comet Lake-U parts or the non-availability of Ice Lake notebooks aren't going to help Intel much in the overall notebook segment.

If you look at the CPU-z score, then you could see that the Ryzen 5 4500U is on par with an Intel Core i5-9600K desktop processor which has a TDP of 95W. That's quite impressive for a 15W chip which is being compared against another 6 core and 6 thread but much higher clocked and higher TDP desktop SKU.

Moving on to the graphics performance, the Radeon Vega 6 GPU on the Ryzen 5 4500U performs with almost 60% better graphics lead over the existing Ryzen 3000 notebook parts. The GPU can definitely run most games at 1080p with decent frame rates while the more demanding titles are playable at 720p resolution. The integrated Vega graphics would be perfect for eSports gaming at 1080p resolution without requiring a discrete graphics card which raises the cost on mainstream notebooks. This would also allow the notebook to sip-in lesser power in both idle and intensive workloads.

Battery timing seems to be pretty solid too with tests reporting in at up to 12 hours of battery time in standard workloads (PCMark 10 suite). AMD recently released the latest market share figures with the major gain coming in the notebook sector. With 7nm Zen 2 being the biggest update to the AMD Ryzen mobility lineup since the original Ryzen 2000 family, we can expect AMD capturing an even bigger chunk with Ryzen 4000. AMD expects to ship the first Ryzen 4000 laptops in Q1 2020 with 100+ models shipping in the entirety of 2020.