A recently leaked slide shows some very interesting alleged features about the AMD Radeon R9 390X. The slide was released by Videocardz.com but unlike their usual leaks this one has ambiguous authenticity. I would urge readers to take this one with a grain of salt. The slide is pretty simplistic in nature and does follow the usual AMD template - something which I might add isn't really that hard to falsify.

The slide lists an AMD Radeon R9 390X WCE - where I am assuming the WCE stands for water cooled edition. If this is true than that would imply that the AMD flagship is actually coming in both air and water cooled editions. This could also potentially mean that we might be seeing both 4GB HBM and 8GB HBM variants. Something that would really help AMD price skim the graphics market with the proper pricing. 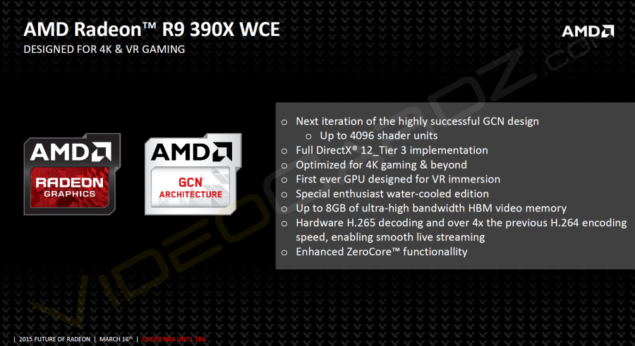 Some other interesting points to mention are the fact that the slide pegs the R9 390X at an astounding 4096 shaders and "enhanced Zero Core" capability.  As far as the date is concerned, we contacted AMD and they made it clear that they have no event planned during that time. So this is either an inhouse or as most of our staff suspect: fake. I for one will be hoping that this slide turns out to be accurate after all.