Details of AMD’s new dual GPU graphics card, the Radeon HD 7990 just surfaced at possibly the worst time of the month yet (this is not an April fools joke if you think so) amid the recent and successful launch of Nvidia’s Kepler GTX 680 GPU. AMD has been working overtime to launch this SKU as their now-to-be flagship graphics card with a bit of more bad news coming their way along with it.

The Radeon HD 7990 or better referred to as ‘New Zealand’ has higher clocks than the current HD 7970 and hence has been labeled as the ‘GHz Edition’ as you see it depicting on top of the card’s intake fan. 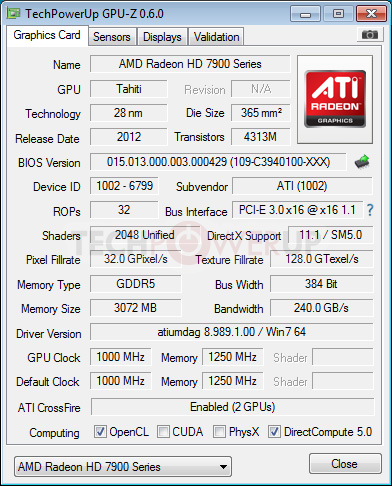 The ventilation design of the GTX 590 seems to be copied to a very large extent, while maintaining the reference fan design that was on the 7850 and the 7770.  The card seems to be as long as 10 inches in terms of length while also boasting a PCB number that denotes to ‘leeeet’. The card, in terms of specifications will come with a 1 GHz core clock speed with the memory clocked to 1250 MHz.

The card will come with 6GB of DDR5 memory that is allocated as 3GB per GPU. The GPUs will both have 2048 stream processors each and the card being powered up by two 8 pin connectors. In terms of display, there will be one dual-link DVI port, with the additional four mini DisplayPort connectors.

The card is slated for a proper hard launch by AMD on the 17th of April and the price has been set at US $849.