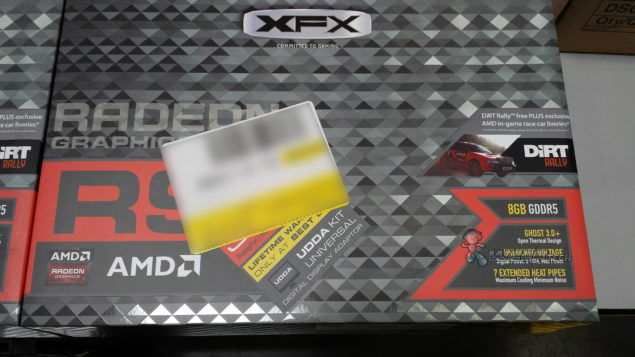 We're told that the June 21st date is specific to one retailer. We're still in the process of confirming whether that will be the retail availability date for all other retailers and e-tailers as well. The stock being delivered we're told includes the R9 390X 8GB, R9 390 8GB, R7 370 and R7 360.

The graphics card pictured above is an AMD Radeon XFX R9 390X 8GB Double Dissipation. It features XFX's new Ghost 3+ cooling design with 7 copper heatpipes and a dual fan solution. XFX states on the box that the card will have unlocked voltage control, something which has unfortunately been lacking on the Nvidia side since the Kepler 600 series in 2012. The power delivery is based on a digital six phase design. Both the robust power delivery and the unlocked voltage mean that users will be able to push this card to the absolute max in terms of overclocking.
The rear I/O of the card includes two DVI-D ports, one HDMI port and one full sized DisplayPort connection. Included with the card is a DiRT Rally game code as part of the Radeon 300 series bundle and finally XFX's famous lifetime warranty.

Update: Another person on Reddit has posted the front and back pictures of the XFX Radeon R9 390X box which can be seen in the gallery below:

AMD's Hawaii is returning with higher clock speeds and double the VRAM. The R9 390X, replacing the R9 290X, will undoubtedly be faster than its predecessor. The higher clock speeds for the GPU core will likely enable the card to completely close the gap with the GTX 970 at 1920x1080. The doubling of memory capacity and the faster GDDR5 VRAM frequencies will enable the card to distance itself even further from the GTX 970 at higher resolutions in which the R9 290X is already ahead.

The fact that Nvidia has yet to show any interest in introducing 8GB versions of its GM204 based GTX 980 and GTX 970 cards means that users who need the higher memory capacity for multi-GPU setups driving high resolution monitors will find solace in the R9 390 series. Combine all of these advantages and the R9 390X 8GB actually creates a worthwhile proposition.

The R9 390X 8GB will not be AMD's fastest graphics card. The Radeon flagship is actually Fury X. A brand new graphics card featuring the company's most advanced and powerful GPU, code named Fiji. Which also happens to be the first GPU in the world to feature 3D stacked High Bandwidth Memory, or HBM for short.

AMD’s launching the Radeon 300 series and the Fury series of graphics cards on June 16th at E3 and the event will be live streamed over the web. Until then we’ll make sure to keep you updated as more information is made available to us, so stay tuned.