Once again AMD finds itself making headlines ahead of its earnings report tomorrow for the headway its products have recently been making around the world. In Korea, the company's processors have reportedly outsold Intel's for the first time in history.

According to the research arm of ShopDanawa, which tracks PC sales in one of the country's largest computer retailers,  51.3% of all pre-built PCs reportedly housed an AMD CPU, whilst the remaining 48.7% were powered by Intel. 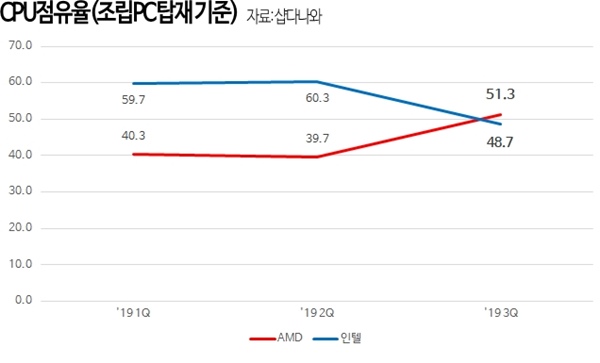 AMD has traditionally done very well in the do-it-yourself channel market, where customers buy parts separately and build their own PCs. Although the pre-built OEM market has been much much harder for the company to penetrate, due to Intel's multi-decade long entrenchment in that space.

Which is precisely why this is such a big deal, AMD has rarely ever outsold Intel in the pre-built market and it has in fact never done so in Korea, a market where both of AMD's competitors NVIDIA & Intel have traditionally been very strong in.

The story does not end with Korea, because as it turns out it's not just Koreans that have opted to buy AMD powered PCs over the established Intel options. In Europe the company has also seen sales of pre-built systems powered by its Ryzen CPUs double over the past quarter.

Largely thanks to the strong competitive position of its 3rd generation Ryzen 3000 series CPUs plus Intel's ongoing 14nm production shortage, which is projected to continue for at least six more months as the transition to 10nm accelerates.

The overall PC market grew by 4% this quarter, as compared to the same quarter last year. AMD on the other hand saw its PC sales in western Europe nearly double, growing from 355,000 units sold in Q3 of last year to 629,000 units in the same quarter this year.

Higher overall PC demand in the market driven by a stronger than expected Windows 10 corporate refresh cycle, a stronger product portfolio by AMD as well as Intel's production woes has been a boon for the red team this year, with the company commanding more than 30% of the share on the CPUBench database for the first time in more than a decade.

There are still some more products coming out from both AMD and Intel which are expected to add to the overall strength of Q4 sales, which is seasonally the strongest quarter of the year. These include AMD's 3rd generation enthusiast Threadripper processor lineup as well as a couple more 3rd generation Ryzen parts on the AM4 platform, including the highly anticipated 16 core Ryzen 9 3950X.

Intel is also set to release its brand new Cascade Lake-X lineup, which is priced to deliver double the performance per dollar of the company's previous generation. Something the industry has been clamoring for, for years, and Intel enthusiast are sure to get excited about.

AMD is set to publish its Q3 financial earnings tomorrow after market close, that's when we can expect to see how it all played out for the company in the last quarter in the kind of detail that's simply not available right now. So stay tuned for some juicy details, maybe even about some upcoming products!