Advanced Micro Devices (NASDAQ: AMD) recently unveiled their lineup of Radeon R9 300 series (most of which were rebadges) and the brand new Fury Lineup with the bleeding edge HBM technology. Analysts at FBR state that they the company is hoping to extensively monetize not only the upcoming big boom in VR (thanks to occulus rift) but monetize their lead with HBM as well as their diverse portfolio of IPs. The source of the report in question can be found here. 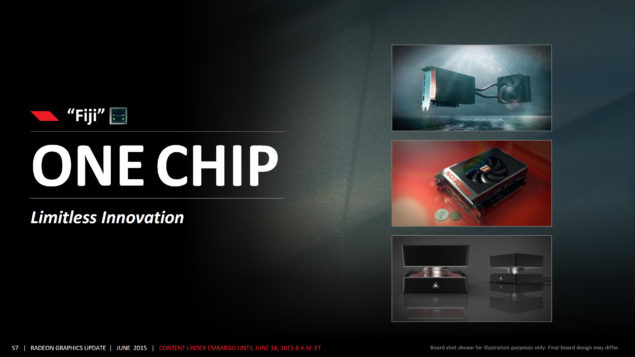 AMD has a very big portfolio of IP, including the extensive cross licensing agreement with Intel (something that will be at the forefront of deliberation in nearly every major financial event in AMD's future), which extends to custom and semi custom products. This is one of the obvious branches of AMD's IP monetization. The other thing that AMD is working to get going it their compute side. AMD's  (NASDAQ: AMD) CPUs are outdated in more ways then one, and the company knows that too (as indicated by the fact that Project Quantum uses an Intel Devil's Canyon Processor). If it could get the performance levels of Zen above a certain performance per dollar threshold then it could turn its compute department around easily. Since Zen is still on the drawing board however, that will have to wait till next year.

Their Radeon lineup consists mostly of badges but they have been chasing price point value optimization very aggressively and for every Nvidia product you will find a roughly equivalent AMD  (NASDAQ: AMD) product that is usually cheaper. Their R7 series starts around the $150 mark, which is a reasonable entry point for gaming. Then ofcourse, there is the Fury lineup. The Fury lineup has HBM technology - which is the bleeding edge of memory standards with one caveat: Its limited to 4GB. While early reports are very heartening, the full effect of this versus rival Nvidia products remains to be seen. The company has maybe less than a years worth of lead before Nvidia rolls out Pascal with HBM2 - so the time frame to monetize the HBM advantage is now.

Finally, the report mentions the really interesting thing (in my opinion): AMD and independent analysts are expecting a boom in VR Tech this year.  The reason for that is the heavily anticipated launch of the Oculus Rift consumer sample (Crescent Bay). With dual 1080p screens, AMD correctly anticipates an upgrade cycle and with upgrade cycles come GPU sales. AMD's (NASDAQ: AMD) Liquid VR technology is very correctly poised to leverage this upgrade cycle and make the most while the metal is still hot. The numbers given by FBR are as follows. They estimate about 5 Million Occulus Rift customers in the first (and biggest) adoption wave and if on avg 50% of them upgrade their GPUs, it would bring an average ASP of $400. If the VR Boom brings in roughly $1 Billion in incremental GPU sales and going with the current market share of AMD, the company even captures one third the sales, thats over 300 Million dollars in incremental revenue in Q1 2016. Needless to say, 2016 could be the year that makes it for the company if it plays its cards right.