Note: This article is tagged as a rumor, the information being reported shouldn't be considered as official confirmation until an official announcement is made by AMD.

Fudzilla has detailed an interesting product which they have been talking about since the last couple of weeks. According to their sources, AMD might be up to something big with their next generation APU design that will be featuring the x86 Zen core architecture and a GCN enabled integrated graphics compartment, allowing true high-performance accelerated processing units for the HPC/Server markets. 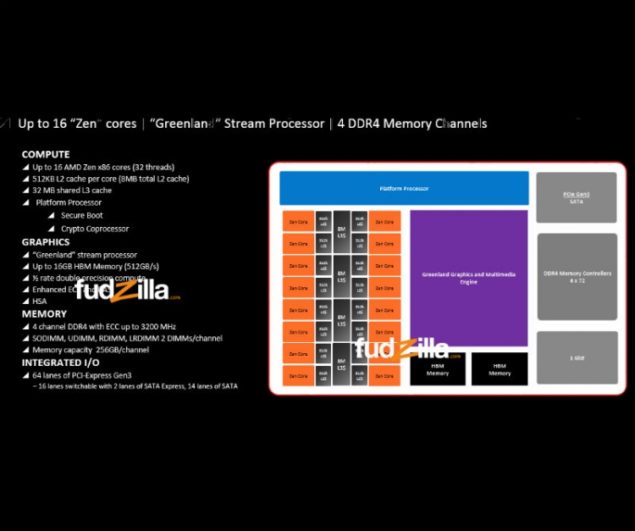 The rumor is too much to consume and may be entirely fabricated as a the design mentioned in the single slide is far too imaginary for AMD who are developing nothing close to the product detailed. The only two platforms which AMD is launching for consumers in the future include Carrizo on notebook and Godavari on the desktop front. This leaves their x86 Zen architecture to end up inside server processors by late 2016 along with a high-performance consumer platform. The slide from Fudzilla might be for a product that doesn't exist or if existed, may launch far in the future.

There's no exact name given to the APU mentioned in the slide, it's just the technical part being shown that lists down the architectural details. The product is distinctly mentioned to be used in the server/HSA market which AMD is focused towards with their upcoming parts. The x86 Zen being a SMT design will boast 16 high performance Zen cores and 32 threads (two threads per core). The Zen cores are backed by 512 KB of L2 cache and a quad module of these cores share 8 MB of L3 cache which puts the total available L2 cache to 8 MB and LLC (L3) cache to 32 MB. Two technologies, AMD Crypto Co-Processor and Secure Boot indicate that it is most likely a product aimed towards the compute HSA sector and this might be believable since the APU sounds a bit too much for a mainstream platform which gets $150 US APU models.

Ok this might get a bit crazy from this point onward, the rumor alleges that the APU will further feature the Greenland GPU which has the next generation GCN architecture and support HBM memory. Known as the Greenland Graphics and Multi-Media Engine, the block diagram reveals that it takes a large portion of the die space and has its own dedicated 16 GB of HBM memory that pumps out 512 GB/s bandwidth. The GPU also has 1/2 rate double precision compute available to it which is a first in the APU department and also points to ECC, RAS and true HSA support.

AMD is also putting a Quad channel DDR4 memory controller on the said APU design which will allow support of up to 256 GB memory per channel (SODIMM/UDIMM/RDIMM/LRDIMM). Basically, there's 2 DIMMs supported per channel so we are looking at 1024 GB of DDR4 memory support with speeds rated at 3200 MHz. Furthermore, the APU has 64 PCI-e 3.0 channels and the lanes can be dedicated to either SATA Express and SATA which take up 16 lanes (2 for SATA-E and 14 for SATA III). The coherent link will allow AMD to fused and interconnect both the CPU and GPU along with coherency in the sharing of the large memory pool which include both cache, HBM and system memory (DDR4). We have already seen Intel's Xeon Phi Coprocessor featuring a similar design by adding Stacked DRAM and adding support for DDR4 memory on a single monolithic package.

So after this long summary of details for an unknown product, the first question that comes to mind would be, is such a design even possible? Well its very much possible and given the recent details revealed by AMD, its very much likely that one day we might see an APU as detailed by Fudzilla. The question that should be asked is not whether we will see such an APU but when we will see such an APU. If you recall about the HPC APU, we have just heard about such design recently in AMD's 2015-2020 roadmaps which were secretly shown off in a conference held in Osaka, Japan. A closer look at the roadmap mentions the replacement to Toronto based Opteron APUs coming in-between 2016-2017. That's around the same time we get to see Zen and the part is mentioned as HPC 64-bit APU. Additional details reveal that the design will take its harmonized design from a FirePro level graphics next core GPU and a server level x86 APU which users several cores. This HPC APU will have TDPs close to 300W and is suited entirely to the compute market. This is the kind of news that does get me excited even if it's not for the consumers, we can expect that in the future we will have APUs of the same performance-level close to us. You can submit your saying on the rumor in the following poll whether you believe its true or not: