This article contained factual inaccuracies and that all information concerning MSI and MSI graphics cards have been erroneously cited and hence redacted.

The first pictures of the upcoming AMD Radeon Fury graphics card from an AIB have been leaked ahead of its launch. The latest graphics card which is based on the Fiji graphics chip is the only new graphics card in the line and the first graphics card to feature HBM memory. We are still a few days away from AMD's official Radeon 300 series announcement but we have got enough data available to show you what the lineup would look like now.

There are a few things that have been confirmed about the Radeon Fury which include the Fiji chip featuring 64 compute units of a total of 4096 stream processors. While we know much about the Radeon 300 series family, we still don't have any concrete information regarding the Fiji based lineup in regards to their actual specs and their naming schemes. AMD has long been quiet but more and more leaks along with official details are now starting to pop. Just recently at Computex, AMD showed off the Fiji based GPU with HBM that confirmed that the card stacks 4 GB of HBM memory on the interposer along side the GPU core. This shows a 4096-bit wide memory interface that can pump out a total of 512 GB/s bandwidth. Exact clock speeds for the core or the ROP and TMU count are not known  at the moment.

A nice shroud  texture that will be part of all 300 series cards is featured on t he top. Two Radeon logos  are featured on the top and side which lit up in red color when the card is operation. We know from previous details that the card will utilize two 8-Pin power connectors to get power from. Display outputs include a single HDMI and three Display ports. The PCB for the card is very short and has a 6-Phase design. The majority of the area taken by the Fiji chip which has a total size of over 1000mm2 while the chip itself measures around 560mm2. Each HBM chip measure 35mm2. The card is watercooled and comes with a 120mm radiator. Rumors are that there could be air cooled variants for these cards too on launch.

The second leak comes straight from Videocardz who have found the first roadmap of AMD's graphics products for 2014-2015. The roadmap shows the top to bottom 300 series lineup and can be seen that AMD has 7 cards planned for this year. These include the Tobago Pro and Trinidad Pro based Radeon R7 360 and Radeon R7 370 which are rebrands of the Bonaire and Pitcairn GPUs. The Antigua Pro based R9 380 features the Tonga Pro and the Grenada (Hawaii Rebrand) based Radeon R9 390 and Radeon R9 390X graphics card. In this perspective, the lineup will look something like the following: 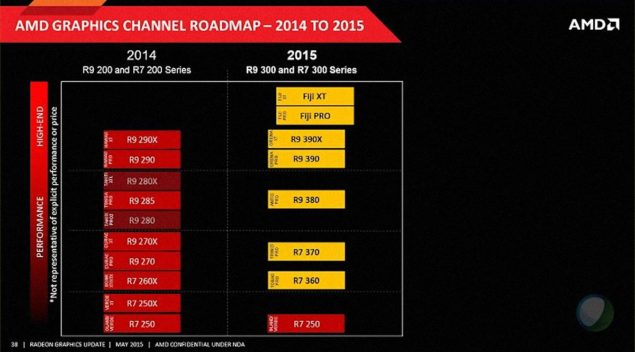 The lineup is geared to hit the market this month (except Fiji) at competitive prices, it will be interesting to see how well can AMD perform with their refocused lineup against an already established NVIDIA who have seen no competition against their Maxwell graphics card since the past 9 months. Their flagship GTX 980 Ti and Titan X which are based on the GM200 GPU would be up against the Fiji based parts in a battle to secure the title of the fastest single chip GPU on the planet.

Our source was also able to confirm that AMD will bundle their top most cards with Star Wars Battlefront to sweeten the deal for Radeon users. This means that buyers who buy or pre-order the cards will immediately get $60 US worth of value on their purchase and gain access to a highly anticipated AAA title based. Cards under the Fiji based parts are not confirmed to be included in the bundle and will get Dirt: Rally instead.