It has been officially confirmed that AMD's upcoming Fiji GPU will be the world's first to feature stacked High Bandwidth Memory. Technically speaking, two pieces of information have officially been confirmed today. The first being that AMD's upcoming flagship GPU is called Fiji. The second is that not only will Fiji feature stacked High Bandwidth memory, something which we had pointed out in our deep dive article on HBM seven months ago, but that it will also be the world's first GPU to do so.

This confirmation manifested via the revelation of HotChips 2016's schedule. Which includes a presentation titled "Fiji, The World’s First Graphics Processor With 2.5D High Bandwidth Memory". Conducting the presentation will be AMD's Joe Macri and Raja Koduri both of whom are big AMD GPU veteran engineers who were responsible for crafting AMD's and before then ATi's GPU architectures. Joining them will also be Mike Mantor and Bryan Black AMD's head of the die stacking program, who talked about this technology back in 2012.
I should explain that HotChips is an annual event that's held in August of every year in which a great number of companies, including AMD, Nvidia and Intel come forth to present a deep and detailed overview of their most recently launched products. The actual timing of the presentation does not correlate with the product launch date. The actual announcement should occur sometime before the presentation. In previous HotChips presentations AMD only discussed products which have already been announced prior to the event. 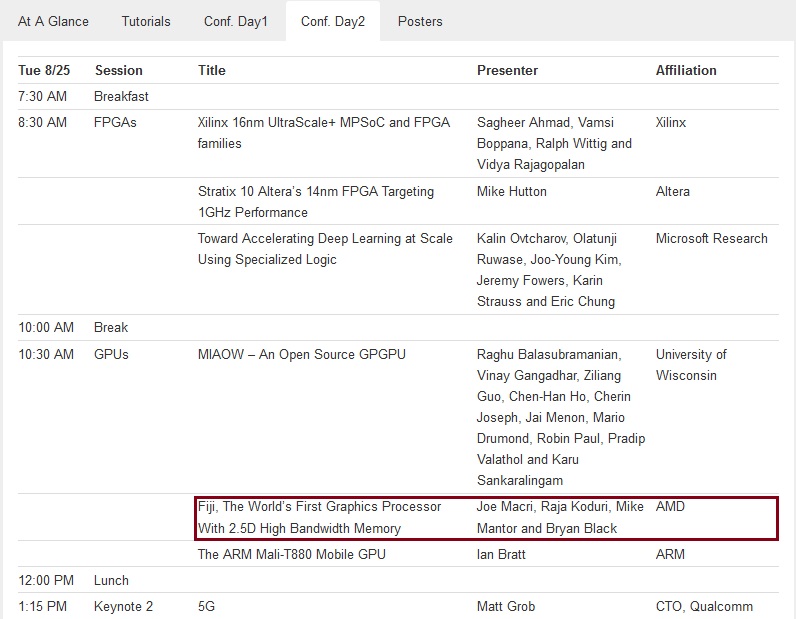 Fiji will be AMD's upcoming flagship GPU that is set to power the next generation Radeon flagship graphics cards. Last week we reported that HBM production is ramping up for the upcoming Radeon flagship. And prior to that we had AMD stating that they'll publicly talk about the new GPUs sometime later this quarter, likely at Computex in June. So that's likely when we'll have an official reveal of the new R 300 series.

HBM represents the revolutionary step that has been so badly needed in the evolution of memory standards. The first generation of HBM promises to deliver 4.5X the bandwidth of GDDR5 and a staggering 16 times the bandwidth of DDR3.

Note that single channel DDR3 controllers normally have 32bit wide I/O. Leading to 8GB/s bandwidth. But that number is still eclipsed by the 128 GB/s figure for first generation HBM.
The second generation promises to double the bandwidth by doubling the speed from 1Gbps to 2Gbps. While also quadrupling the memory capacity for 4-Hi stacks from 1GB to 4GB. HBM2 will be featured in AMD's upcoming Arctic Islands graphics architecture with the "Greenland" flagship GPU.

Below are the specifications for Fiji based on the SiSoft Sandra database leak.

In our technical deep dive on Fiji we were able to draw a rough estimate of the R9 390X's performance based on the core count and the clock speed. But as we can't yet quantify the performance benefit from HBM without rigorous testing we left it out of the equation. Even without putting HBM into the equation the estimated performance of the R9 390X may still surprise you.