The first real tear down of the Radeon R9 Nano has been published by DGLee over at IYD.kr.  The Radeon R9 Nano which is allegedly launching in a few days is going to be AMD's latest compact graphics card, that will rock the Fiji GPU core and HBM architecture to deliver unprecedented performance over the Hawaii GPU based graphics cards inside a very small package. The AMD Radeon R9 Nano will go off to show the HBM advantages as it helps reduce the surface area to make future cards more compact and power efficient. 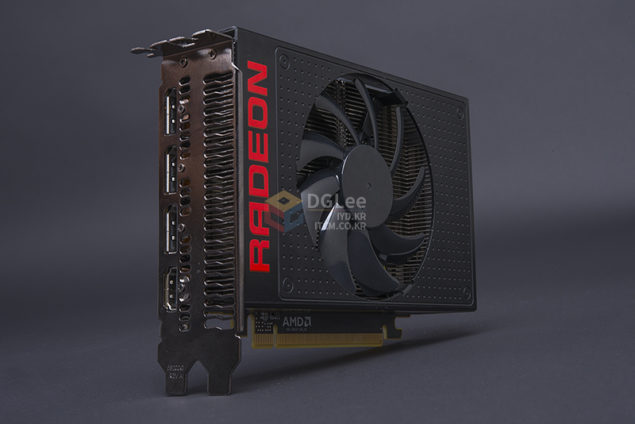 The AMD Radeon R9 Nano is based on the Fiji GPU core, featuring 4096 stream processors, 256 TMUs and 64 ROPs. The card will pack 4 GB of HBM VRAM that is found on the main die itself, clocked at 500 MHz (1.0 GHz) effective clock rate that pumps out 512 GB/s bandwidth. We have seen some performance benchmarks of the card where it's faster than the Radeon R9 290X and also delivers twice the efficiency. The Radeon R9 Nano can shape things really well for the HTPC market, offering enthusiast grade performance in a package measuring 15 cm. We currently have no information regarding pricing, but the card is expected to feature an price range of $449-$499 US. 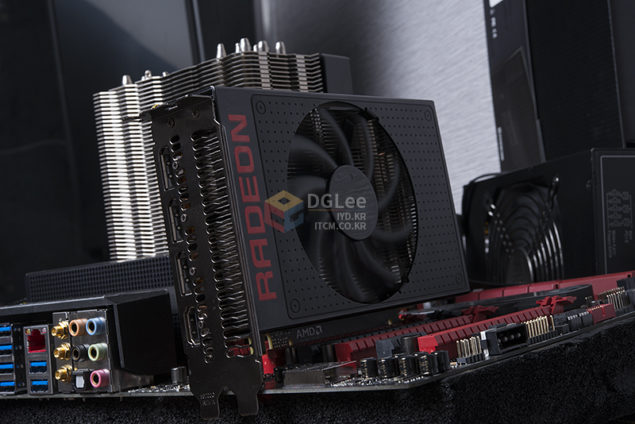 The Radeon R9 Nano is being tested on the ASUS Rampge V Extreme motherboard. The card looks like a small add-in audio card on the large X99 motherboard and it will be really interesting to see four of these cards running in CrossFire configuration. As for the design, the Radeon R9 Nano sticks to the Fury X theme with its silver and black color scheme. The large Radeon logo is engraved in red on the front of the shroud. The card comes with a metallic frame while the shroud has the same dot pattern on it. Compared to the rubber surface of the Fury X, the R9 Nano sticks to a plastic surface. The card features a tiny heatsink (by GPU standards) and a lone, 92mm, single axial fan. Unlike the Fury X, the top surface cannot be removed for modification.

On the back of the shroud, we can see a single 8-Pin connector that powers the card and surrounded by a plastic frame. The card has a 175W TDP and can use additional power when needed to deliver faster GPU performance. On the side, we see a nice Radeon logo but it doesn't lit up like the Fury X since there was not enough room left to house the necessary LEDs. A cut out design can be seen that is used to regulate the air flow out of the shroud which will help when using multiple cards in CrossFire configuration. Right in the middle is a BIOS switch for the card. Display outputs on the card include three Display Port outputs and a single HDMI connector. The front bracket has large exhaust vents to blow the air out of the chassis. 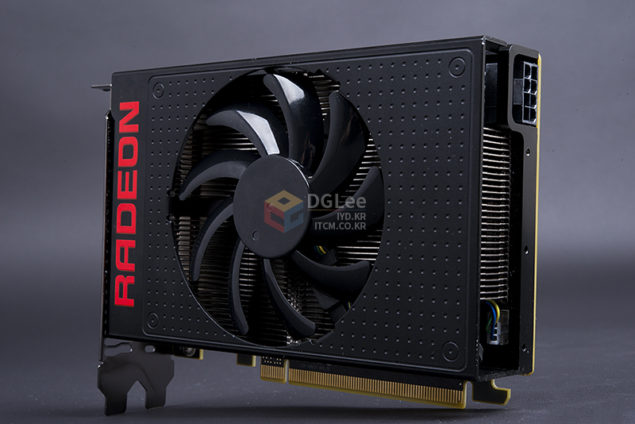 The Radeon R9 Nano doesn't come with a backplate so the circuitry can be seen on the back of the PCB.  The card is even smaller than the Sapphire Mini-ITX compact and a large amount of power circuitry can be found housed right beneath the Fiji GPU core. A large metallic retention bracket holds the cooler in its place fron the bottom. The heatsink is a large aluminum fin array block that is equipped with dense aluminum heatpipes that make their way to a large copper block that makes direct contact with a large copper based heatsink block.

The Radeon R9 Nano's PCB is as small as it can get. The PCB packs a 4 phase power design that is featured right next to the GPU. The layout has been kept simple and more emphasis should be given to stability of the card so it runs properly in all gaming loads. We won't be expecting the card to feature great GPU OC (Overclock) performance but it should pack some headroom for the card to boost further up as it will have lower clocks than Fury X. Expect more information in the coming days regarding the AMD Radeon R9 graphics card.