A couple of days back we leaked the entire lineup of the Mobile Kaveri Series and the Dedicated Crystal GPU Series. Well AMD has just confirmed the same in the APU 14 Conference along with some very interesting points. It turns out that the new Kaveri will actually be based on a 'revolutionary' hybrid architecture, namely a combination of the Steamroller and Excavator Architecture. 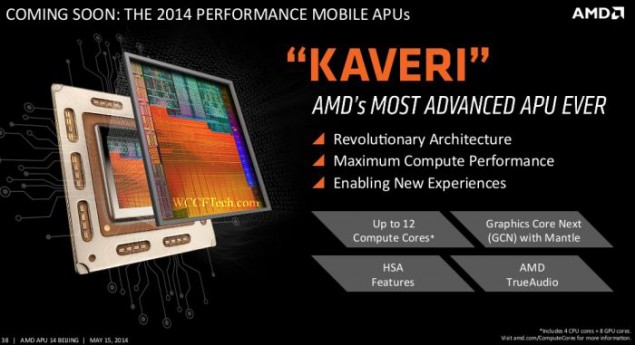 Of course when AMD says 12 Compute Cores they actually mean 8 GPU Cores and 4 CPU Cores. Interestingly the 4 CPU Cores will be based on a combination of Steamroller and Excavator Architecture. Now, to be honest, I am not entirely sure how that works but then again there was the SteamrollerB core we heard so much about a while back. The slides make it clear that its coming "soon" Now we already know the entire lineup, heck we even know have the benchmarks against ULV Haswell , so thats not really a surprise in the coming. The most interesting part for me of this more or less expected reveal remains the 'hybrid' architecture. Those of you who missed our previous leaks, here is a recap on the lineup:

The flagship of the Mobile Kaveri Series is an OEM Only Product. The consumer products actually start from the A10-7400P and consists of a total of 7 APUs in descending orders of power. We also received some very interesting the benchmarks, namely the mobile Kaveri series pit against the not-released-yet Haswell Refresh. The OEM flagship consumes 35Ws of juice (CPU + GPU) and is built on the Radeon R7 series.  The CPU is clocked at 2.7Ghz with a boost clock of 3.6 Ghz. The GPU is clocked at 600 Mhz with 666Mhz boost and has 512 GCN Cores. The FX-7600P houses 4MB of L2 Cache.  The Retail flagship A10-7400P consumes the same amount of power but only has 384 GCN Cores along with lower CPU clock rates. It is built on the Radeon R6 Series. We also have 4 ULV APUs, namely the FX-7500, A10-7300, A8-7100 and the A6-7000.