[Rumor] The new entry in our source list has sent us a pretty interesting report on AMD's plans. Since the source is as yet unauthenticated by us, I am going to tag this one as a rumor, though the report does make sense and seems quite probable. Bitandchips.it claims that the Kaveri Update is coming in 2015 and there won't be a Carrizo APU for desktops for quite some time. 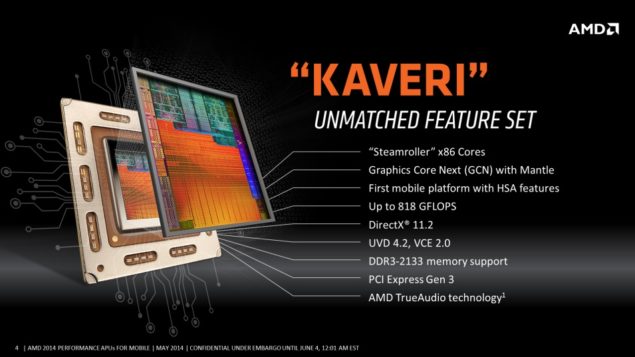 You might remember the last few leaks concerning the FM3+ platform.  These leaks were from the same source and stated that Carrizo will be FM3+ and we wont be seeing the FM3+ desktop socket till 2016. Since we have already seen leaks of Notebook Carrizo, we know it very much exists. So what is to happen to the desktop spectrum during this time? Well, the answer appears to be a Kaveri Refresh, following right in the footsteps of its blue counterpart. Now what exactly will the Kaveri Refresh entail? Well, you are not looking at a higher core count on the CPU or GPU side. Since its a Refresh it naturally means a more refined version of Kaveri with higher clocks at the most. So better revision and upped clocks equal Kaveri Refresh and it lands in 2015. However, on the notebook side we should be seeing some very decent gains with Mobile Carrizo that could possibly feature Stacked DRAM. So summarizing:

The above roadmap comes entirely from this one leak source. So I shouldn't even need to tell you to take the above with a pinch of salt. However, if one proves true, we should be able to safely assume all others are true as well, since the origin is the same. That's it for this rather short update.