A few days ago we revealed the entire Mobile Kaveri and Crystal GPU Series and I promised that I would be revealing benchmarks within 24 hours, but due to a slight technical malfunction (my laptop threw a fit) the actual delay was slightly longer. So sorry about that, but anyways here are both the Gaming and Compute benchmarks for AMD's newly revealed APUs. And I have also thrown in the APU Generation Transition Table as consolation for the delay. Without further ado, lets dig in. 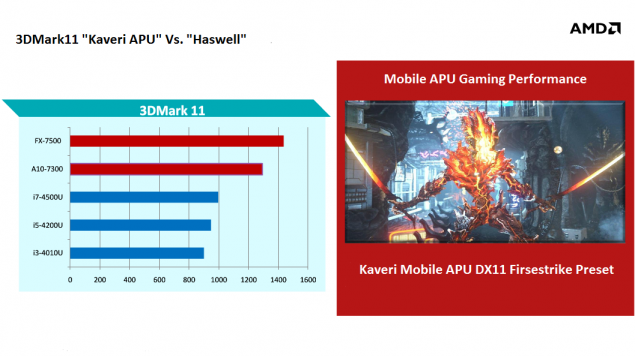 The AMD Mobile Kaveri APUs were pit against the ULV (Ultra Low Voltage) Spectrum of Intel Mobile Haswell CPUs.  While we did not receive the exact specifications of the testing rig, rest assured that every bottleneck was neutralized. And since I have delayed this enough, I will skip the preliminaries this time.
Now these are very interesting benchmarks. The OEM-only flagship FX-7500P was not benchmarked, however because the Retail-Available FX-7500 is ahead of the ULV Haswell by leaps and bound we can very safely assume that it will be even further ahead. Not only that but the very-much mainstream A10-7300 APU is comfortably ahead of the i7-4500U, i5-4200U and i3-4010U in terms of Gaming Performance. What it actually means is that APUs are finally exiting the territory of HTPC-only setups and entering the realm of true gaming power. While you would not be able to run any modern game at anywhere near the modern games, there should be quite a few games out there that run well at low-medium settings and considering the low power consumption. That is definitely a bargain. 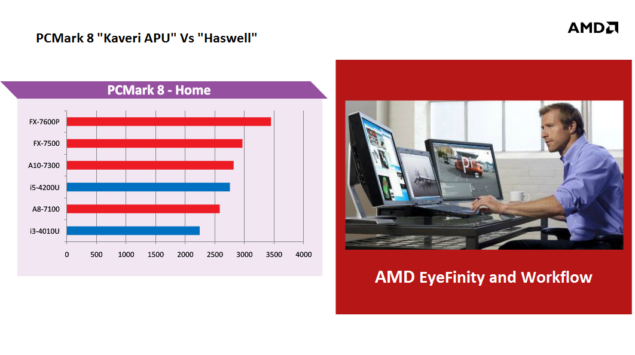 Compute is a sector where AMD has nearly always lost to its Blue Counterpart. However here, once again, the Mobile APUs HSA features truly shine. It is to be noted that the i7-4500U lies ahead of the FX-7600P and was omitted by AMD's PR People. However the fact remains that the i3 and i5 offering of Intel's latest ULV looses to AMD's APU in Compute as well. That is remarkable news for people on the go. Here is the generational succession chart and yeah, that's all folks.