As we have revealed previously, the true successor of the Kaveri platform will come in the form of Bristol Ridge - AMD's Excavator based flagship APU product. While it will be based on the 28nm node, the APU will feature atleast a 25% straight up improvement in terms of graphical prowess over Kaveri, while the new Excavator cores will offer higher CPU muscle. Slides of the Bristol Ridge platform were leaked courtesy of Benchlife.info and reveal quite alot of juicy details. 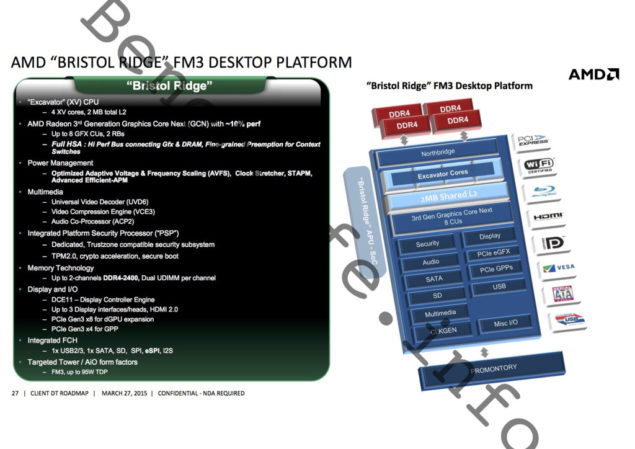 The Bristol Ridge family of APUs will feature 4 Excavator cores with a total of 2MB L2 cache. The next generation APU will have 8 Radeon R9 300 Series based CUs. The new revision of GCN (since AMD doesn't formally distinguish between GCN revisions, its getting kinda difficult to keep track) which should be informally dubbed as GCN 1.3, if I am not wrong, will feature a 10% power efficiency improvement over Kaveri. The APU will support PCIe 3.0 x8 for dGPU expansion and will have up to 3 display outputs. The integrated FCH will allow USB 3.1 support as well using the U3102A controller. Bristol Ridge will land on the AM4 port and will have TDP of upto 95W depending on the model in question.

Bristol Ridge on paper appears to be very Carrizo-like in its specifications apart fro the fact that it is a full fledged desktop chip. The amount of GCN cores featured in it are likely to remain at 512. As mentioned above the processor architecture will be Excavator while the GPU architecture should be a revised iteration of GCN. Interestingly Bristol Ridge should come around the same time as Summit Ridge, which will be on the 14nm node. Bristol Ridge APUs are going to have one very interesting feature: support for DDR4 memory, specifically dual channel DDR4 2400 Mhz. You might recall how APUs are very dependent on memory, so this is going to be a very nice feature for AMD APUs of the future, not to mention DDR3 will actually become more expensive than DDR4 to deploy.

AMD's next generation Bristol Ridge's Excavator cores will be clocked at 4Ghz each which means that any performance gain will be architectural in nature as opposed to clock advantage. Clock for clock comparison with Kaveri should be very interesting. Gaming performance increase is stated to be around 15% of Carrizo Mobility and 25% of Kaveri. The APU will have full HSA support and OpenCL 2.0. It will also have the AZ/I2S Audio Coprocessor on board for sound processing (duh). The chipset is ofcourse Promontory.  Its worth mentioning that Summit Ridge is at the 14nm node whileas Bristol Ridge is still at 28nm. So all that while remaining on the old and trusty 28nm process is quite a feat.

Rumors have also indicated that the Basilisk platform, successor to Beema, on the mobility side of things might be powered by 2 Zen cores instead of Excavator (although I personally think that is unlikely) - and will naturally arrive later than the desktop variant. The leaked TDP is 15-35W depending on TDP and will be on the FP4 BGA fixed socket. Here is the specification comparison table of AMD's upcoming CPU and APU platforms versus the current mainstream platforms.

Deal of the Week: 43% Discount on the Windscribe VPN Pro Plan