Linux support from AMD hasn't always been the most complete, with drivers having been in rather poor shape. Even Steam Machines show that their drivers are not on par with their Windows counterparts, with performance that's decidedly lower. It's a shame as Linux increases it's adoption rate among the curious and those that need such a platform for their business ventures.

GPUOpen introduces a change in attitude and direction with their Linux driver development. There's currently an open-source Radeon Driver and a closed-source Catalyst driver, with the Catalyst based driver having the best overall performance for any application that wants to make use of the architecture for anything more than displaying the desktop. Both options were actually quite bad when it came to gaming performance and even trying to get some HPC applications to run was sometimes an exercise in patience that just shouldn't have to be.

AMD will have a new open-source driver going forward, called AMDGPU. This driver stack is a complete rework of the entire driver that consolidates all of the good things that have been seen in the current split driver objective. The new driver, AMDGPU be included in the Linux kernel itself for easy portability to different distros. You'll also be able to run applications headless, something that wasn't possible before. 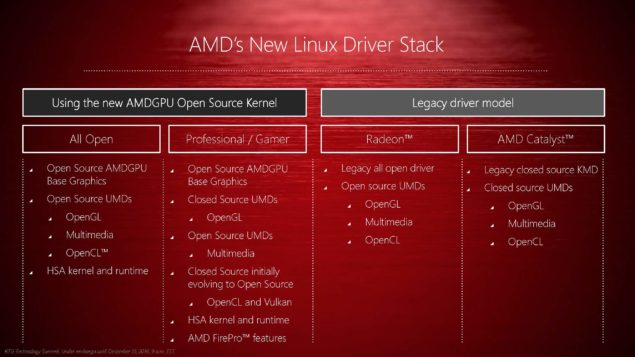 This is a far more serious approach to Linux, probably spurred by two segments of the market that are under-served by them at the moment. Linux is the platform of choice for large-scale compute projects. Not having an efficient driver that actually handle the kinds of tasks that the market needs and wants pushes away those potential customers to the competition, which has a fairly stable Linux presence. The Steam Machine and SteamOS have also made Linux an actual viable option for gamers, both experienced with the platform and not. It only makes sense that if they want Radeon GPU's to be competitive in that space to actually start supporting it properly. And now they are.

AMD's new initiative is a welcome change and a refocus on the open-source. That's where people get the warm and fuzzy and feel good about computing. We enjoy having choices, whether or not we admit it all the time. Sometimes, for a developer, we need to be able choose how we approach, and have control over that entire process. AMD is supporting the open-source community by giving out the tools and SDK's for free, letting anyone and everyone with the time, inclination and knowledge to play as is necessary.

For gaming this means better and more efficient effects that aren't simply dropped into the code-base. This is how it should be done, letting developers have access where they need it in order to succeed.

Be sure to check out a fantastic look at GPUOpen by our very own Khalid, who talks about the importance of open-source in game development.