AMD is announcing their GPUOpen initiative today. They're further moving towards the open-source in both gaming and with compute. This is an expansions of their focus to let the industry have all the tools necessary to successfully support their own individual needs, without the need for a static black-box solution that might be inefficient. 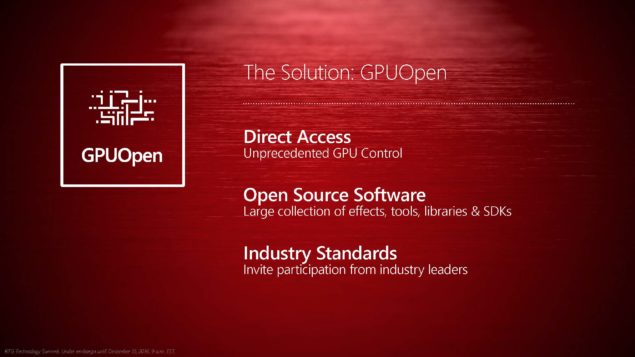 GPUOpen seeks to "unlock" the potential in the GPU, with open standards and support from AMD.

This new initiative comes is a way to help developers obtain the best tools necessary in order to create the most visceral experiences on any platform. There's currently a distinct division between development on consoles and the PC that's only now slowly being closed with the adoption of DX12. But that won't solve all issues inherent in cross-platform development. GPUOpen will give developers open-source tools and resources that should allow closer to the metal development with better and more direct access to the GPU.

Also, the open source community is a true driver of innovation in the industry. There are plenty of examples throughout history where ideas have built upon one another, improving design and providing a much better experience better program over time. The idea is that open development encourages innovation by letting anyone play and modify the source code to their hearts content, adding in their own fixes and changes that have been found to be effective in particular situations, forking software as necessary. A variety of fresh ideas can be make their way into a basic and sound software architecture.

AMD has always been a large supporter of open standards. In contrast to their competitor, which has a black-box solution for both gaming and HPC applications. The source code can't be accessed or modified making it not the most friendly of solutions to developers that want full control over the the entire code to make it truly optimized. There are recent examples where a black-box approach to graphical effects in games has had a profound negative effect on performance.