AMD has released their roadmap for their 2014 lineup of embedded solutions which would make AMD the first company to offer both x86 and ARM based products simultaneously to the embedded computing market for low power and high-performance systems. 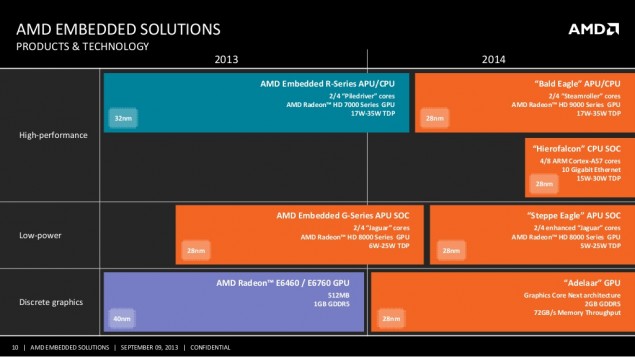 The AMD Embedded Roadmap for 2014 details how the embedded computing market is growing in fast pace and as a focus toward the market, AMD would be introducing four new products codenamed Adelaar, Steppe Eagle, Bald Eagle and HieroFalcon.

"AMD is committed to providing the embedded community with the solutions required to succeed in today's transformative market as it continues to expand at an unprecedented rate," said Arun Iyengar, vice president and general manager, AMD Embedded Solutions. "There are different customer needs in different segments of this market -- from low-power to high-performance, Linux to Windows, x86 to ARM -- and now with our upcoming product portfolio, we are addressing them by providing embedded design engineers with a range of solutions backed by our embedded longevity program for supply stability assurance to fit their every need." AMD

"The unprecedented rise of intelligent connected solutions over the next several years will require a myriad of ultra low-power to ultra high-performance solutions connecting devices to the cloud," said Jim McGregor, Principal Analyst with TIRIAS Research. "With their new roadmap, AMD leverages both ARM and x86 computing and graphics architectures to fulfill the company's vision of creating an ambidextrous ecosystem. The current products combined with the new roadmap offer price, performance and power options to meet the needs of embedded designers." AMD 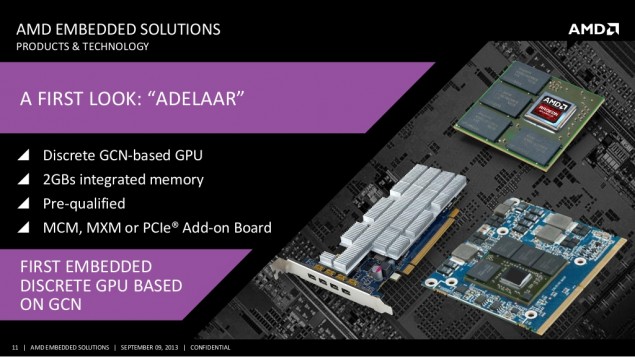 First up in the lineup is AMD's Adelaar discrete GPU which is featuring the GCN (Graphics Core Next) architecture. The Adeelar GPU is specifically designed for embedded solutions and would be available as an MCM (multi-chip module). The GPU comes with 2 GB of GDDR5 memory integrated on the die pumping out 72 GB/s bandwidth and support for DirectX 11.1, OpenGL 4.2, Multi Display. The AMD Adeelar embedded GPU is planned for launch in first half of 2014 as an  MCM, mobile PCI express module (MXM) and standard PC graphics card. 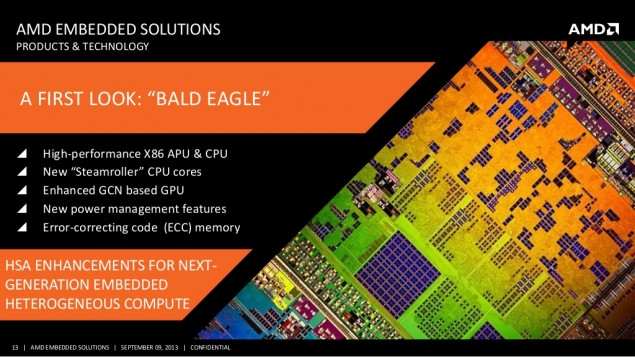 On the high-performance side, AMD has the Bald Eagle APU/CPU featuring the x86 Steamroller cores. The Embedded chips would be available in Dual and Quad core variants with the APU models featuring an Radeon HD 9000 series GPU with a TDP of 17 to 35 W. Both the APU and CPU models would feature full support for HSA enhancements delivering superior and next generation performance for embedded clients.

The Radeon HD 9000 Series integrated graphics chip would be based on the GCN core architecture and its a surprise that unlike the discrete desktop Volcanic Islands lineup which would possibly use a new naming scheme, the iGPs stick to the older branding scheme. The Bald Eagle APU/CPU would replace the current R-Series APU/CPU which feature the x86 Piledriver cores. 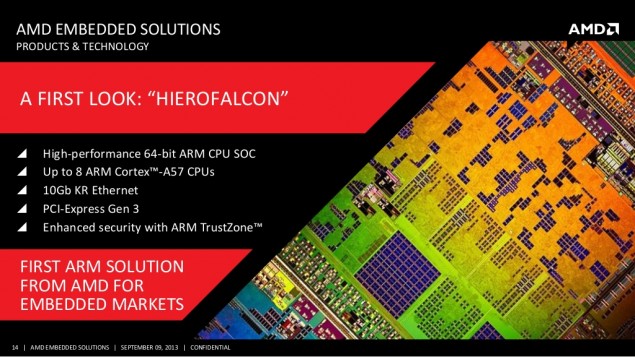 Another product in AMD's Embedded high-performance lineup is the first 64-bit ARM based Hierofalcon SOC powered by upto eight ARM Cortex-A5 cores clocked at 2.0 GHz. The SOC ranges between a TDP of 15 - 30 W. The highly integrated SoC includes 10 Gb KR Ethernet and PCI-Express Gen 3 for high-speed network connectivity, making it ideal for control plane applications. The "Hierofalcon" series also provides enhanced security with support for ARM TrustZone technology and a dedicated cryptographic security co-processor, aligning to the increased need for networked, secure systems. "Hierofalcon" is expected to be sampling in the second quarter of 2014 with production in the second half of the year. 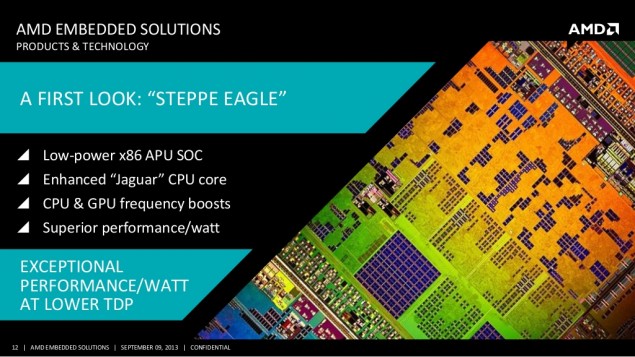 Designed for low-power embedded applications, "Steppe Eagle" is designed to offer increased performance-per-watt both at a lower TDP than the current AMD Embedded G-Series APU SoC, as well as extending the high-end performance above 2 GHz. "Steppe Eagle" also provides embedded design engineers the flexibility to leverage the current AMD Embedded G-Series APU SoC board design and software stack for a variety of applications with footprint compatibility. "Steppe Eagle" is expected to be available in the first half of 2014. 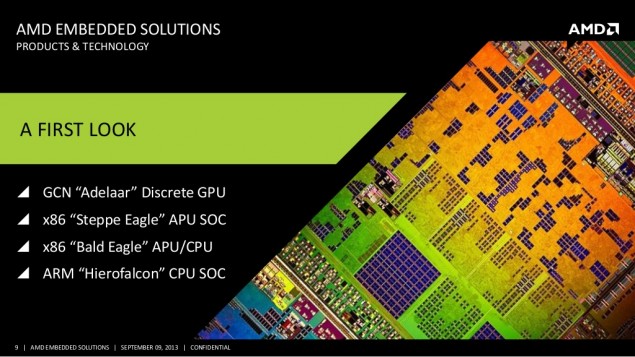