2017 has been an absolutely wild year for PC hardware and the discrete GPU market in particular. Not only has last year witnessed several major GPU launches, like NVIDIA's GTX 1080 Ti, GTX 1070 Ti and AMD's brand new Radeon Vega lineup, it also saw the highest demand on those high-end products we've seen in recent history.

Driven by rising demand in the growing PC gaming market as well as the rapidly growing cryptocurrency mining scene, GPUs have become one of the industries most sought after products. The explosive growth of cryptocurrency led to the biggest GPU shortage that we have ever seen as well as the highest and longest GPU price inflation in market history. Suffice to say GPUs were selling faster than NVIDIA or AMD could make them.

Photos of empty graphics card shelves at retailers, screenshots of massively inflated GPU prices and out of stock listings on online stores circulated for months on hardware forums and still continue to do so today. Pictures that were once used jokingly to mock the sad state of affairs of the market, have evolved to embody a true pain that PC hardware enthusiasts are feeling all over the globe. Building your own gaming system is simply no longer a feasible option. This depressingly true statement is one that I had never imagined I would write.

Needless to say though, this incredible demand on GPUs from cryptocurrency miners, while seen as a scourge by gamers, has been and continues to be bliss for GPU makers. Especially so for AMD, the underdog in a vicious market duopoly.

According to the latest discrete GPU market share report from Jon Peddie research via Anandtech, AMD grew its share from 27.2% in Q3 of 2017, to 33.7% in Q4 2017. Which represents nearly a 24% increase in the company's GPU unit shipments, one of the largest jumps recorded in the company's recent history. 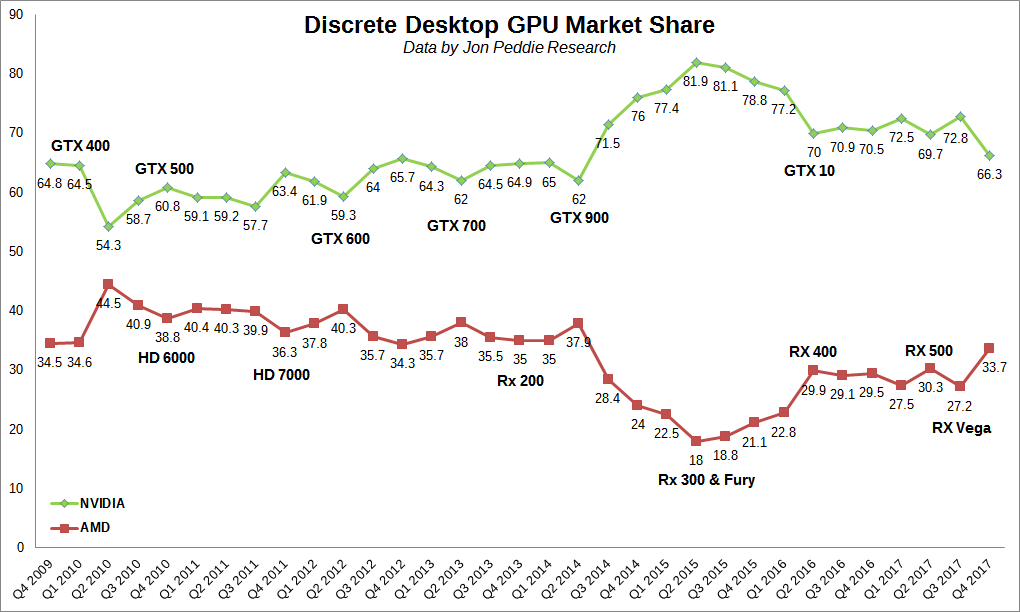 The Vega launch was by no means AMD's most successful, and the graphics architecture itself isn't the most competitive we've seen from the company. With that being said, Vega cards are incredible mining GPUs. And if your hardware happens to be a money printing machine, you'll find yourself inclined to overlook its many shortcomings.

Retailers today are selling Radeon RX Vega 64 and Vega 56 cards at more than two times their original MSRPs and are still struggling to keep up with demand. The cards are gone faster than retailers are able to restock.

No Signs of Reprieve Any Time Soon

A short-term market demand blip has developed into a worldwide shortage crisis. It's been nearly 9 months since the shortage started and there are no signs for reprieve any time soon.

According to AMD, their GPU manufacturing is currently limited by a shortage in the memory supply chain, but may also soon hit another setback with silicon wafer supply. Major fabs announced earlier last month that they will be increasing their wafer order prices by no less than 20%.

NVIDIA has also recently stated that we may not see GPU price normalization until at least the end of Q3 this year. No matter who we ask, we just can't seem to find any hopeful news. So buckle up folks, looks like 2018 is going to be a painful one.