[UPDATED Feb 28, 2016 19:05 AM EST]
Roy has teased yet another photo of AMD's console sized upcoming DX12 VR ready systems. The photo shows six of these systems turned on and standing side by side highlighting the beautiful signature LED lighting in red, an emblematic color of the AMD Radeon brand.

[UPDATED Feb 28, 2016 07:10 AM EST] AMD's Roy Taylor has shared yet another sneak peek at the company's DirectX 12 and VR Ready PC. According to Taylor, this special edition Falcon Northwest Tiki is the world's best DirectX 12 and VR developer box.

The eagle eyed among you will notice that the heart of this system, a dual Fiji graphics board, features a blower style air cooler. Are these air cooled "Fury X2" graphics cards OEM only? are we going to see both liquid and air cooled retail versions of the card come to market ? those are questions that we simply don't know the answer to right now. What we do know is that at 12 TFLOPs of compute this is the world's fastest graphics card by a long shot and it will most definitely be put to good use by developers all over the world.

Original story :
AMD is teasing Radeon powered, console sized DirectX 12 and VR ready PCs that's 8 times more powerful than the XBOX One and PS4.  A photo of a bunch these systems, appropriately finished in red, were posted on twitter by AMD's Roy Taylor, one of the biggest VR advocates inside the company. 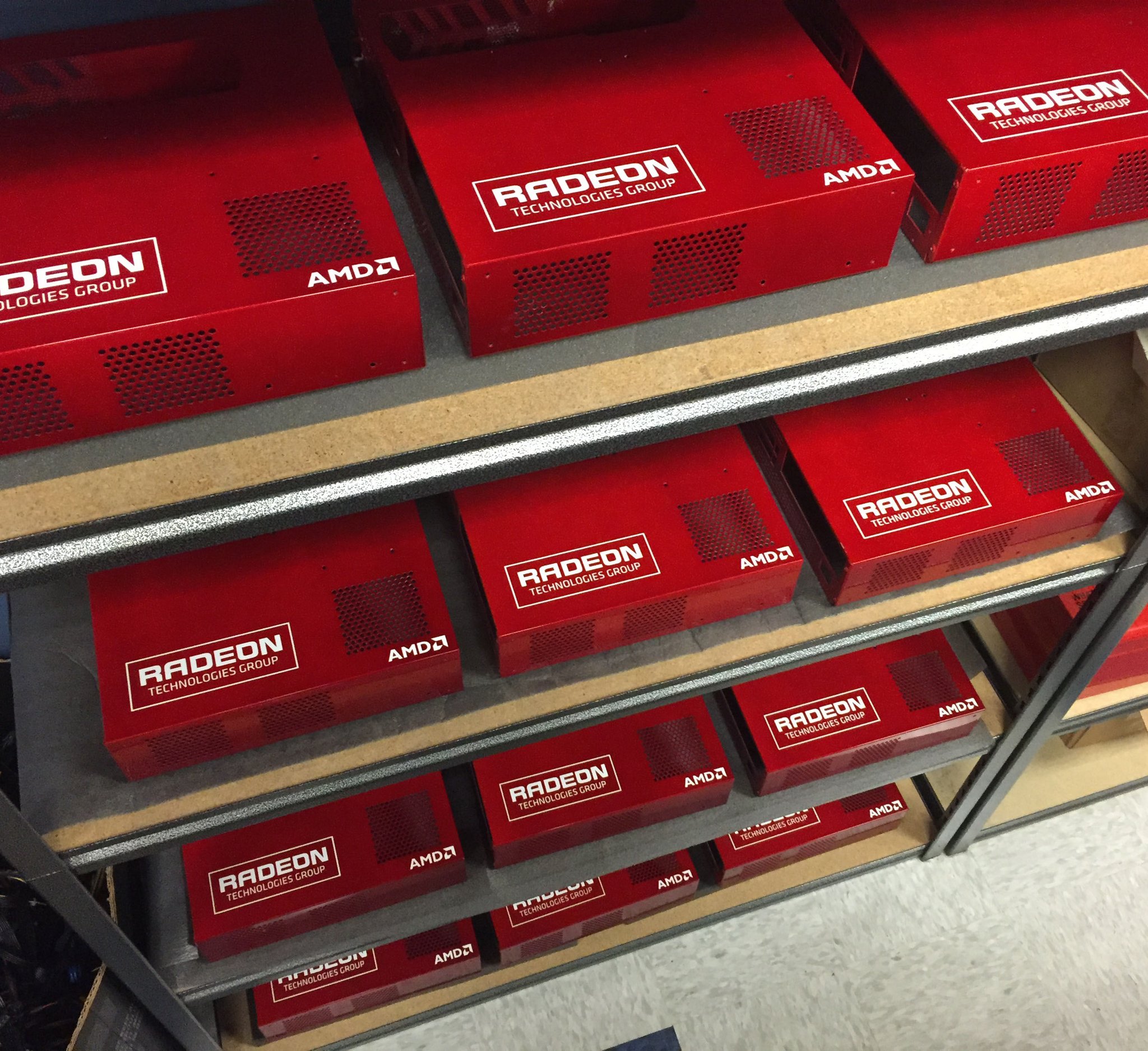 It was later confirmed that the systems you see above are "Tiki" models from Falcon North West. A system builder who has collaborated with AMD to put the world's fastest graphics card, AMD's dual Fiji board, inside a compact - console sized - DirectX12 and VR ready powerhouse.

Interestingly we had heard of this system before, during Roy Taylor's keynote at VRLA.

“Last time I was here I also promised you that we would make the world’s most powerful small computer for developers. We promised you we would take two of our highest end GPUs and put it inside that tiny box and if you go downstairs we actually have a demonstration of a dual GPU, 12 TeraFlops, fastest GPU solution in the world, inside of Tiki. It’s a feat of engineering we are delighted with.” – Roy Taylor, AMD Corporate Vice President of Alliances at VRLA Winter Expo 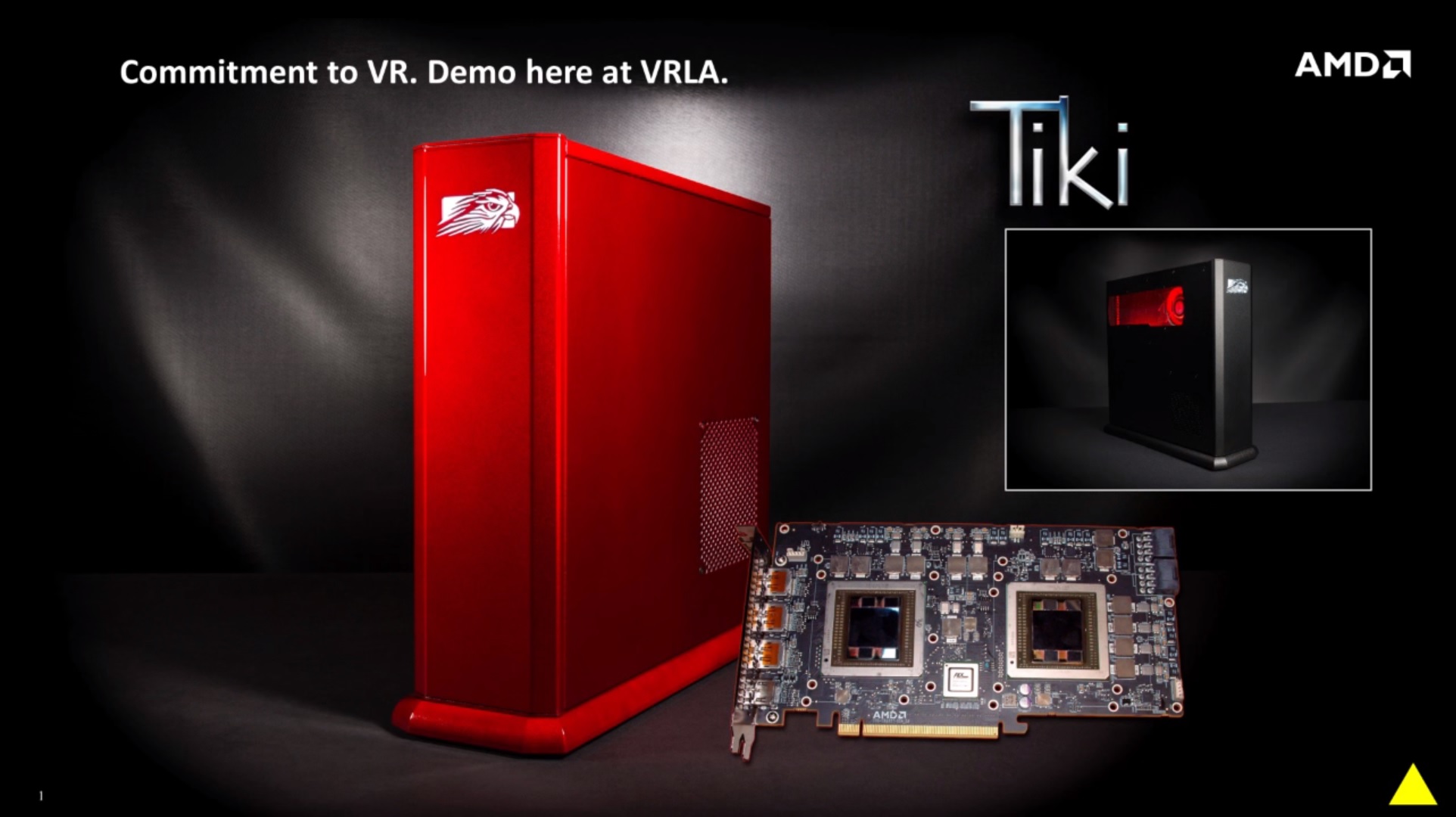 While not all specs for the system in question have been revealed just yet. Roy unveiled that it packs a dual Fiji graphics card with 12 TeraFlops of compute, roughly 9 times that of the XBOX One, 7 times that of the Playstation 4 and double that of Nvidia's GeForce GTX Titan X.

A single Fiji XT GPU found in AMD's Radeon R9 Fury X2 flagship graphics card is rated at over 8 teraflops, two would easily amount to over 16 teraflops. However, it seems that the version employed in the Tiki is a custom affair designed with modest air cooling to fit inside this sleek compact form factor.

Fiji is AMD's largest ever graphics processing unit and the very first in the world to feature 3D structured, 2.5D stacked High Bandwidth Memory, or HBM for short. A standard that AMD and SK Hynix, one of the world's largest memory makers, co-invented. Because vertically stacking dies enables much greater densities and because HBM chip are smaller than GDDR5 chips to begin with there are immense area savings on the printed circuit board of the graphics card as a result. Allowing for the creation of far more compact form factors.

Also unlike GDDR5, HBM is packaged alongside the host processor, in this case the GPU, on a single interposer. The closer proximity to the GPU enables significantly wider memory interfaces and reduces latency. The smaller, shorter connections also enable greater power efficiency. This means that HBM will also require less voltage to operate allowing for even more power savings.

HBM allowed AMD to create significantly smaller and more power efficient graphics cards. Starting with the popular R9 Nano and all the way up to the dual Fiji board inside the Tiki. A consumer version of the dual GPU board was supposed to land sometime late last year, but it was delayed to Late Q1, early Q2 of this year to align it with major VR headset launches according to the company.

AMD's Roy Taylor hints that these Tiki systems may be given away to developers of virtual reality platforms as well as DirectX 12.

AMD has so far already demoed the smallest member of the Polaris family. The GPU demonstrated performance and power efficiency results that were by far the most impressive we had seen from one generation of GPUs to the next to date. The company revealed that there will be multiple GPUs based on the Polaris architecture to address the entry level, mid-range and high-end segments of the discrete graphics market.

So far it has unveiled two 14nm FinFET Polaris GPUs, given the names Polaris 11 and Polaris 10. One of which is a very small GPU, estimated to be around the same size as AMD’s Cape Verde which is 123mm² large. The goal for this chip is to deliver console-class gaming performance in thin and light notebooks. This is the GPU that AMD chose to demo at CES. The other member of the Polaris family is a large GPU, described as a successor to the Radeon R9 Fury X.

Polaris - Radeon 400 series - graphics cards are set to launch this summer, before the back to school season, for both desktops and gaming notebooks