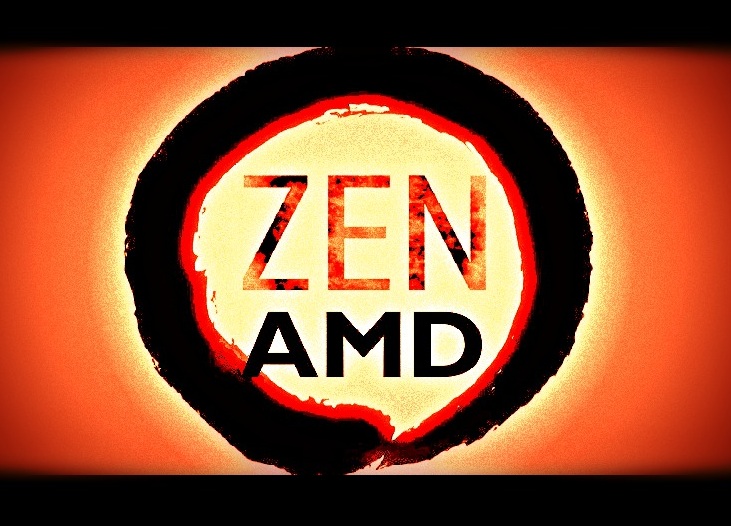 Two of AMD's highly anticipated lineup of enthusiast 14nm Zen CPUs have been leaked online and they look like quite the beasts. The Zen CPU michroarchitecture has been four years in the making. An effort that's been led by the legendary CPU architect Jim Keller. The brilliant mind that was behind AMD's most successful and most competitive CPU architecture's in the company's history. The original Athlon, K7, and the Athlon64, K8, micro-architectures.

AMD has been noticeably missing from the high-end CPU segment for years. So for fans of the Athlons, Phenoms and FX processors to say that the excitement around Zen is palpable would be an understatement. So without any further delay let's get straight to the leaked information.

I should start off by saying that the first CPU of the two, the eight core mode, is the very same one that was used for the leaked Ashes of The Singularity gaming benchmarks that we saw last week. An eight core, sixteen thread model clocked at a 2.8Ghz base frequency and a 3.2Ghz boost clock. The CPU's ID string matches that of last week's. It's now been confirmed that this is indeed a 95W model, which speaks volumes to the power efficiency of Zen.

Comparatively, Intel's eight core 16 thread 6900K Broadwell-E processor which is manufactured on a similar - but not identical - 14nm process is rated at 130W, 35 watts more than the 8 core Zen engineering sample.  It's important to mention that despite what the almost identically named process technologies might imply, Intel's 14nm and Samsung's/Globalfoundries 14nm FinFET process are slightly different.

Intel's 14nm process produces notably smaller transistors compared to Samsung's 14nm LPP and the difference is even bigger compared to TSMC's 16FF. Which makes the 95W TDP all the more impressive considering Intel's process technology advantage here. The second CPU model that was leaked is a four core, 8 thread model with a 65W TDP. Again a power rating that's noticeably lower than that of Intel's quad core 14nm Broadwell and Skylake chips.

Both chips are compatible with AMD's upcoming brand new AM4 socket. Also notably both chips bear the Zeppelin code name. Which means that we're likely looking at two different configurations of Summit Ridge CPUs rather than an eight core Summit Ridge CPU and a quadcore Raven Ridge APU.

AMD's Zen CPU, What All The Fuss Is About

Double The Performance Of The FX 8350

AMD has finally published additional performance figures for Zen recently that go beyond the 40% IPC improvement over excavator that the company talked about last year. The 40% IPC uplift figure represents the architectural performance per clock improvement of Zen vs AMD's last CPU architecture, code named Excavator. And while comparing the architectural capabilities of Zen to Excavator may have been informative, it doesn't offer a direct real-world product to product comparison. Thankfully, we do finally have direct real-world performance figures for Zen. 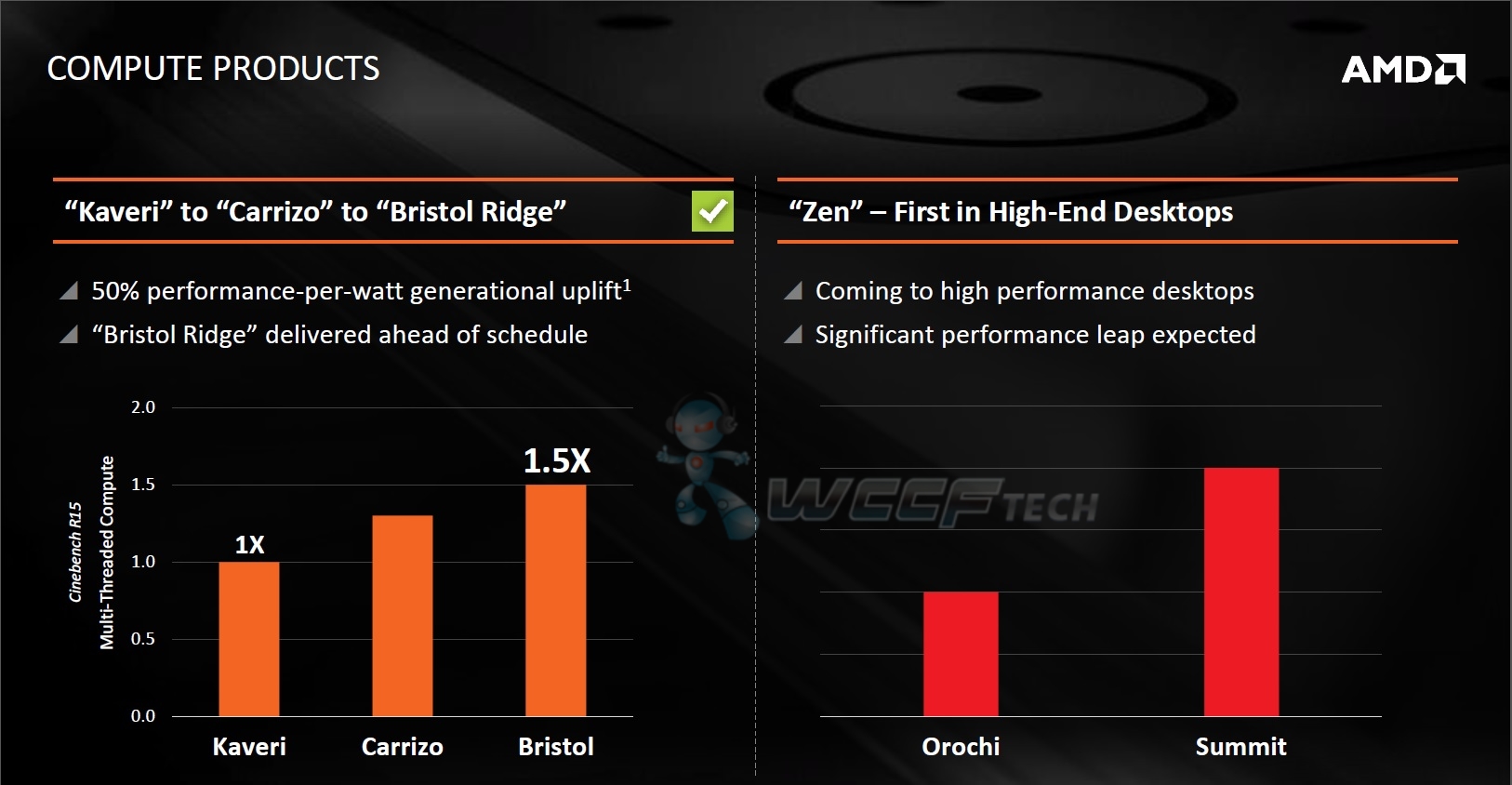 Compared to the "Orochi" quad module, eight core die powering the FX 8350, the Zen based desktop Summit Ridge eight core CPU delivers double the performance in Cinebench R15 according to AMD. This means that a single Zen core is in effect equivalent to two Piledriver cores in performance, which is incredibly impressive. This dramatic performance difference comes from the significant architectural performance per clock improvements in addition to Zen's simultaneous multithreading capability.

it's important to remember that AMD's latest Orochi dies feature Piledriver cores rather than Excavator. Excavator cores are roughly 15% faster per clock than Piledriver This in turn puts Zen at a lead in excess of 60% vs Piledriver in terms of performance per clock. Doubling the performance of the FX 8350 puts Zen in direct competition with Intel's eight core Extreme Edition i7 5960X.

Just recently the very first gaming benchmarks for Zen surfaced, giving us a glimpse into what AMD's brand new CPU architecture is capable of.  The game in question was Ashes of The Singularity and the results were incredibly impressive. 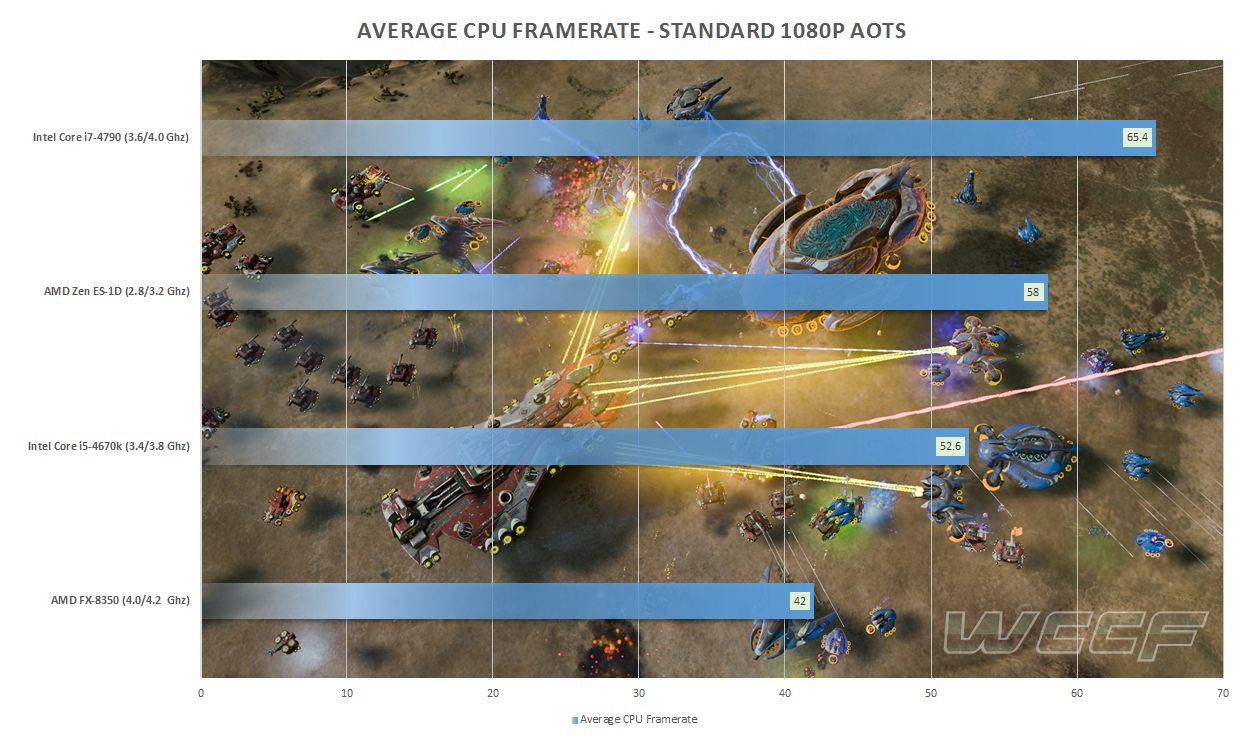 AMD Zen 8 core high performance enthusiast Summit Ridge CPUs are reportedly slated for an October release on the company's brand new desktop AM4 socket, a source close to AMD revealed earlier this year. Although no official inside the company has confirmed the date yet.  President & CEO Lisa Su confirmed at the company's annual meeting of shareholders that Zen has been running in the company's labs for some time demonstrating performance that reportedly exceeds expectations. She also confirmed that Zen will begin sampling this quarter. As is evidenced by today's leak.

John Taylor, Corporate Vice President, Worldwide Marketing, revealed that AMD has poured a lot into R&D to make sure that the AM4 platform and Zen CPUs support the latest & greatest features. He confirmed that USB 3.1, M.2 SATA and NVMe will all be supported. He also said that a lot of effort has gone into ensuring that Zen delivers the best possible experience to users. This includes thermals and acoustics. “Our new Wraith coolers are getting rave reviews – you don’t need an expensive third party cooler any more” he said.

Zen's development has been long in the works. The microarchitecture taped out back in 2015 and products are on track to launch later this year on the desktop. However, we know that AMD is working on far more than just high performance desktop CPUs. The company has had 32 Core Zen server CPU, a sixteen core Zen HPC APU and a quadcore Zen consumer APU all in the works for several years.

We published an exclusive report last year detailing AMD's plans to introduce its Zen based FX CPUs later this year and Zen based APUs in 2017. We also broke down details about Zen CPUs, APUs, AM4 motherboards and the features of AMD's next generation platform which haven't been made public yet. So we would highly recommend that you go check out that report if you're interested in finding out more about Zen.

Desktop Zen CPUs are part of the "Summit Ridge" family. Which is going to include a full lineup of high-end Zen based CPUs that will feature "high core counts" and compete in the "enthusiast" segment according to AMD. That is, they're going to be lined-up to compete against Intel's Haswell-E and Broadwell-E products. 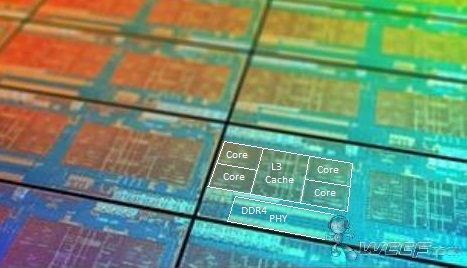 The desktop FX CPUs feature a TDP of up to 95W and eight high performance Zen cores with multi-threading for a total of 16 threads. Zen is said to have extremely competitive single threaded performance according to engineers with knowledge of the chip. Citing more instructions per clock than Intel's Broadwell and just a smidgen behind Skylake.

Zen has been one of the most hotly anticipated AMD products in a decade. It's the company's first attempt to compete at the high-end CPU space in five years. In many ways Zen also represents the company's first truly innovative next generation architecture that's also on process node parity with Intel since the Athlon days.

What has lend the tech community even more optimism is that Zen harkens back to AMD's glorified Athlon days in another even more crucial aspect. Zen is a brand new clean-slate design that's been led from the get-go by accomplished CPU architect Jim Keller. The very same person that brought us the original Athlon XP and Athlon64 processors. AMD's most successful products to date.

We saw this optimism reflected at CES by AMD's CEO.

"The overall expectation is that AMD will be a better year from a financial standpoint compared to 2015,”
Su went on to state that she has full confidence that by CES next year everyone will say "AMD is back!".

AMD announced Zen for the very first time, publicly, at its Financial Analyst Day last year, the company touted a 40% improvement in instructions per clock versus its latest high performance core Excavator. However, during last quarter's earnings conference call President and CEO of the company Lisa Su announced that Zen is performing beyond initial expectations and that engineers have managed to achieve a greater than 40% IPC improvement.

AMD Preisdent & CEO Lisa Su - Q4 2015 AMD Earnings Call Transcript
Our Zen-based CPU development is on track to achieve greater than 40% IPC uplift from our previous generation and we're on schedule to sample later this year.

In client computing, our opportunities to regain share in 2016 will be driven by our design win momentum, continued progress expanding into
the commercial market, and reentering the high-performance desktop market late in the year with our Zen-based Summit Ridge CPU.

AMD announced that later this year it will be introducing an entirely new line-up of FX CPUs and a brand new platform ‘AM4″. These new FX CPUs are what AMD is referring to as “Summit Ridge”. The new platform will include a new socket with DDR4 memory support. AM4 will also support upcoming Bristol Ridge APUs. This is in effort to unify all of APU & CPU desktop platforms under one roof instead of the current bifurcation between AM3+ and FM2+.

The AIDA64 benchmark added support to Zen based Summit Ridge as well as Raven Ridge FX CPUs and APUs last year. Raven Ridge will succeed Bristol Ridge and will be the first generation of APUs to feature Zen, while Bristrol Ridge will be a refresh based on the 28nm Excavator core. Several leaks have also revealed that AMD is working on several Zen APUs with large discrete class built-in GPUs and high bandwidth memory.

On the server side AMD is preparing Zen based CPUs with up to 32 cores and 64 threads. That's four times as many threads as AMD's current highest end server offering. A very significant jump that's going to play a crucial role in giving Zen the competitive edge it needs in servers. A market that Intel has virtually monopolized with 97% market share.

In our exclusive report we published last year we shared the details that have been made available to us about AMD's Summit Ridge processors coming later this year. For starters Summit Ridge CPUs will include models with eight, six and four Zen cores. Four cores being the lowest core count Summit Ridge CPU AMD is going to sell. All CPUs will include the company's new platform security processor, PCIe 3.0 support, dual channel DDR4 memory controllers, copious amounts of L3 cache and updated storage features. 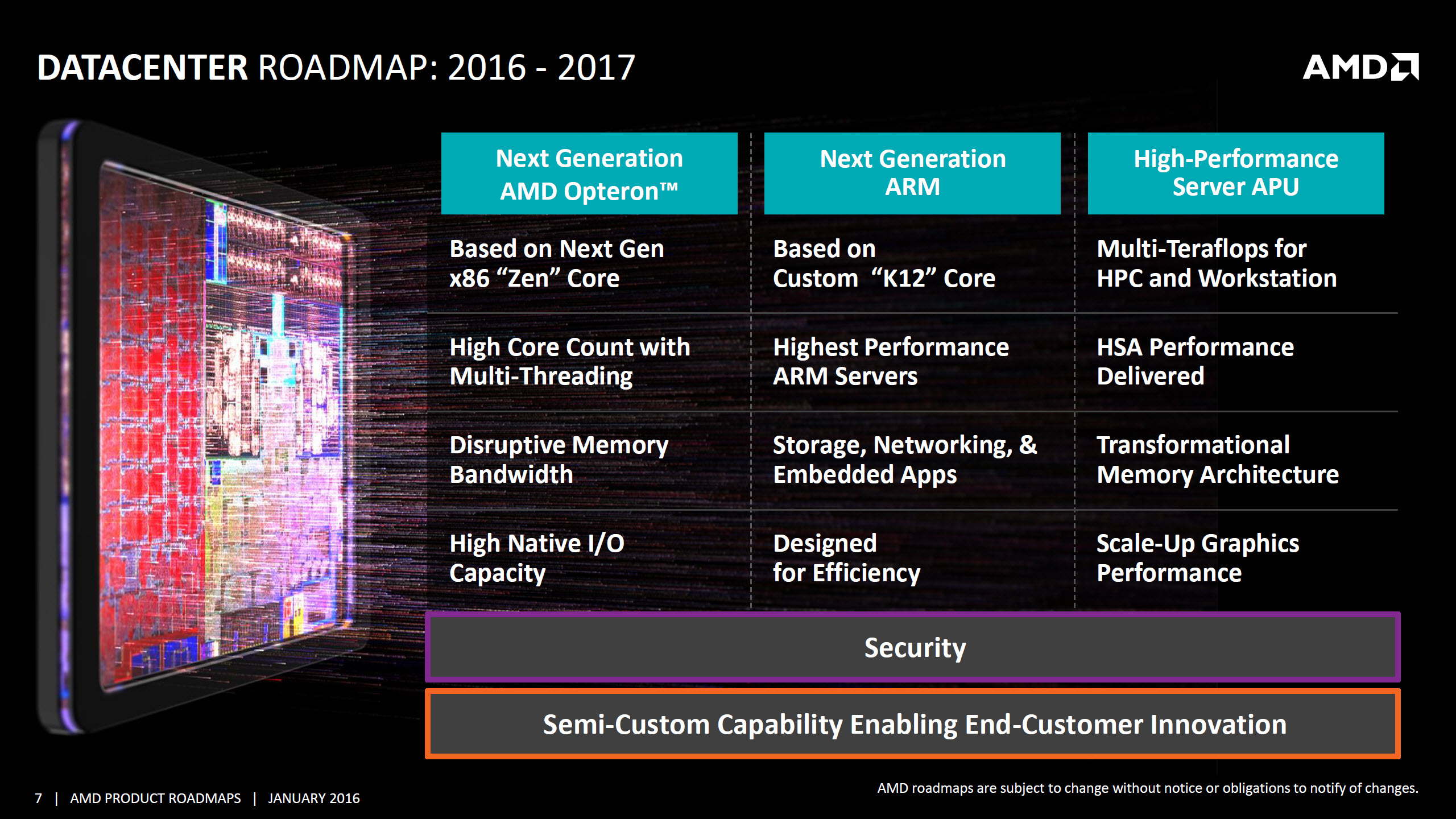 This is possible because we're told the Zen core itself is very area and power efficient. So AMD can build high core count chips that are still small, with good yields and at reasonable cost. Imagine an eight core Haswell-E equivalent chip the size of a Carrizo APU. We're set to see a CPU price war take place later this year like we haven't for nearly a decade.