Over the coming years, AMD plans to release several new APU families based on its latest CPU and GPU technologies. Featuring brand new Zen CPU architectures and Vega/RDNA designs, these APU families will be featured on both desktop and mobility platforms. We know much about the Renoir 'Ryzen 4000' family that launched this year and is headed to the desktop platform but Expreview (via HXL) is providing us with information on what to expect from AMD's future APU lineups.

The Renoir 'Ryzen 4000' APU family that was unleashed by AMD this year is based on the Zen 2 CPU and Vega GPU architectures. The CPU is fabricated entirely on the 7nm process and has given AMD a tremendous lead on the mobility (notebook/laptop) segment. 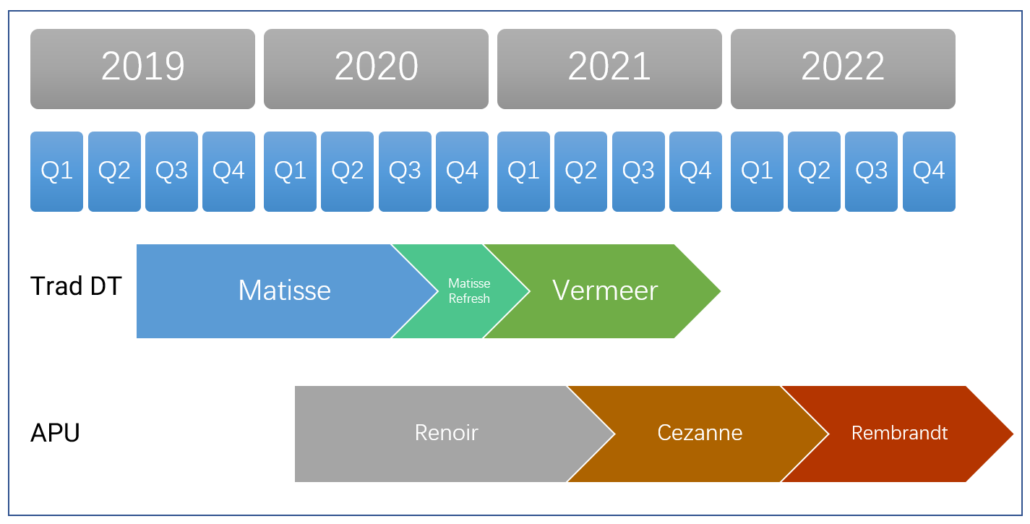 The Ryzen 4000 'Renoir' APU family is expected to make its debut on the desktop platform in June and should feature similar core tech as the top of the line Renoir chips such as the Ryzen 9 4900HS. We have already talked about Ryzen 4000 APUs in our previous articles but let's take a look at what's next!

We already touched on some details for Cezanne 'Ryzen 5000' APUs in our previous post but it looks like there's more information to talk about. For starters, like this year's lineup, the Cezanne family would be split into two segments, the high-performance Cezanne-H and the low-power Cezanne-U. The processors will feature the FP6/AM4 package which is the same as the existing chips. It's a BGA platform and will definitely help laptop makers since it keeps the same design while desktop users can upgrade over from their existing processors to the new ones without requiring to change their motherboards.

While I mentioned that the Cezanne APU was spotted with an RDNA 2 based Navi 23 GPU, it looks like that's only true as far as discrete options are concerned for laptops and notebooks. The actual GPU powering the Cezanne APU is going to be an enhanced version of the existing Vega GPU which is also its most refined form to date. The source reports that Cezanne APUs will be fabricated on the TSMC N7 process node. From the looks of it, the CPU side will once again be the major update while the GPU side will get similar enhancements to we saw on the refined 7nm Vega GPU on the Renoir APU family.

The source also reports that AMD's Cezanne 'Ryzen 5000' APU lineup is expected to hit the market by 2021. We can hear an announcement at CES 2021 with launch planned around Computex 2021.

Moving on to Rembrandt, this is when we will start getting a major upgrade to AMD's APU lineup. The Zen 3 upgrade to Cezanne will be a significant uplift but while Rembrandt doesn't get a major CPU side upgrade, it does excel Cezanne in all other ways possible. The AMD Rembrandt lineup is expected to be branded under the 6th Generation Ryzen family known as Ryzen 6000, replacing its Cezanne based brethren.

It's the GPU side which will be getting the major update with Rembrandt. The Vega GPU will finally be replaced by AMD's RDNA 2 GPUs. While we aren't getting any specifications at this point in time, we can definitely expect a big improvement in graphics performance simply considering that AMD will jump straight from its Vega GPU to RDNA 2 GPU, bypassing the RDNA 1 GPU architecture that comes in between. The RDNA 2 GPUs deliver increased performance per watt and ray tracing tech which will be awesome to see on an APU.

AMD's Rembrandt APUs will also feature support for DDR5, LPDDR5, USB 4.0, and PCIe Gen 4.0 but they will also require an entirely new platform. For desktops, Rembrandt is likely to be available on the AM5 platform which will ship either later next year or early 2022. The Rembrandt family will be launching in 2022.

Finally, we have a new lineup of custom SOCs that AMD is developing for ultra-low power platforms known as Van Gogh. There are limited details available on the Van Gogh line of APUs but it is stated that these APUs will be AMD's answer to Intel's Y-series ultra-low-voltage processors. Specifications also look super decent with the APUs expected to rock Zen 2 CPU and RDNA 2 GPU cores with TDPs of up to 9W.

It is stated that these APUs will feature a custom SOC design hierarchy very similar to the chips that are featured on the PS5 and Xbox Series X consoles. There's no telling when these APUs will make it to the market but 2021 would make perfect sense. As you can tell, AMD definitely has a strong APU roadmap laid out for both desktop and mobility platforms for the next couple of years and we can definitely expect to hear more from them when the launch is close by.