AMD's Ryzen 4000 'Renoir' APUs have leaked out along with their proper model names and final clock speeds. The leak comes from Biostar (via Komachi_Ensaka) who has listed down several Renoir Ryzen 4000 APUs within the CPU support list of one of their new B550 motherboards which we talked about over here.

The AMD Ryzen 4000 'Renoir' APU lineup is going to feature support on the AM4 socket and will be succeeding the Ryzen 3000 'Picasso' lineup from last year. Featuring the same die as the recently released Ryzen 4000 'Renoir' Mobility CPU lineup, the AMD Ryzen 4000 'Renoir' AM4 family will be aimed at the desktop platform but feature a major upgrade over its Zen+ based predecessors. The upgrades come in the form of a full 7nm architecture design that will include 7nm Zen 2 cores and an enhanced 7nm Vega GPU core. 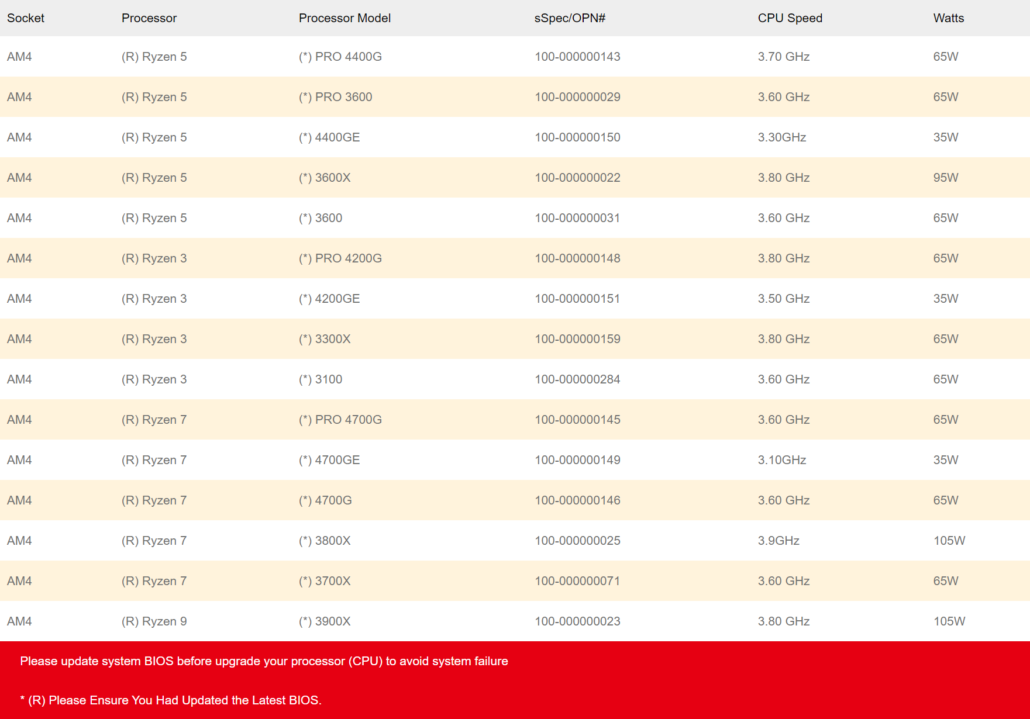 Specifications such as the base clock speeds are also mentioned while we can match the OPN code with the ones that leaked out by Igor's Lab to get more data such as the specific GPU configuration on these APUs.

As for the other parts, AMD will be preparing various SKUs featuring 35W and 65W TDPs. There are Ryzen 4000 APUs featuring 4, 6, and up to 8 cores like the Ryzen 7 4700G. All Ryzen 4000 'Renoir' APUs will support DDR4-3200 MHz speeds natively but to really take advantage of the enhanced Vega iGPU, you would have to use higher frequency DRAM and feed the GPU with as much band-width as possible. A couple of AMD B550 chipset motherboards from various manufacturers will also feature HDMI 2.1 output which will only be usable with AMD's Renoir AM4 APUs.