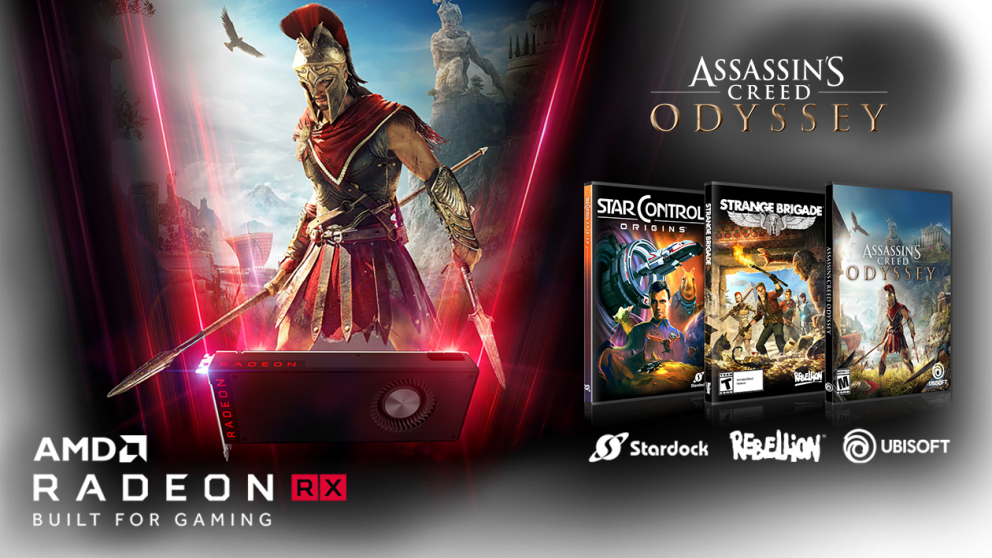 AMD announced today that three games due to release soon on PC, Assassin's Creed Odyssey, Star Control: Origins and Strange Brigade, will be bundled for free (provided that they are purchased from participating retailers) with the AMD RX Vega, RX 570 and RX 580 graphics cards.

Strange Brigade is out later this month, Star Control: Origins will release on September 20th and Assassin's Creed Odyssey launches October 5th. Below you can check out brief descriptions for each game, provided by the respective developers.

WILL YOU ANSWER THE CALL TO ADVENTURE?
Egypt, 1930's. Erased from ancient history and buried in a nameless tomb for 4,000 years, Seteki the Witch Queen has risen once again.

Only one troop of daring heroes can stand against the fearsome power of Seteki and her army of mummified monstrosities: The Strange Brigade!

Explore remarkable ruins, solve perilous puzzles and uncover tantalising treasure while blasting your way through an array of undead enemies in thrilling third-person action that’s certain to bring out your inner adventurer!

ONE GRIPPING ADVENTURE
Hunt the foul Seteki through a rip-roaring campaign filled with dangerous dig sites, prodigious pyramids and crumbling caves packed with bountiful foes to send back to the afterlife. Explore alone or team up in 2-4 player online co-op!

FOUR FEARLESS FORTUNE HUNTERS
Travel the ancient world as one of four dashing agents trained to tackle the supernatural. Unleash devastating magical powers and unload powerful prototype weapons such as the fire-spitting Krakatoa, the ice cold Chill Burster, and the brain-busting Blunderbuss!

A LEGION OF MALEVOLENT MONSTERS
Seteki is not the only mythological menace to have awoken … she’s brought an army of loyal beasts with her! Face her many nefarious ne’er-do-wells, including moaning mummies, fire-breathing assassins, armour-plated minotaurs, giant scorpions and much, much worse!

TONS OF TERRIFYING TRAPS
Keep an eye on your environment to find creative ways to boff your enemies! Decapitate the undead with spinning blades, fry them to a crisp with fire traps, crush them with a well-placed boulder and more. You wouldn’t set them on your team mates … would you?

OODLES OF PUZZLING PREDICAMENTS
Keep those peepers peeled for suspicious clues, secret entrances and ancient contraptions that need re-awakening! Who knows what alluring treasures and buried riches await you on the other side…

Explore a living galaxy filled with alien civilizations, new and exotic worlds, pulse pounding combat, and a deep, rich history that is yours to unravel! The space role-playing game you've been waiting for!

Congratulations! You are the Captain of Earth's very first interstellar ship. That's good. Really good. So very good. There's just one small problem. Barely worth mentioning but a hostile alien race known as the Scryve want to exterminate us. We need you to go find allies, discover and use these so-called Precursor relics to upgrade your ship and try to avoid getting eaten along the way so that you can save humanity. We don't want you to feel pressure though. Just the very future of the human race rests on your shoulders.

Star Control: Origins is in development! You can pre-order it now and get access to the Betas. Do so and you get the game at a discount as the price will rise the closer we get to finishing.