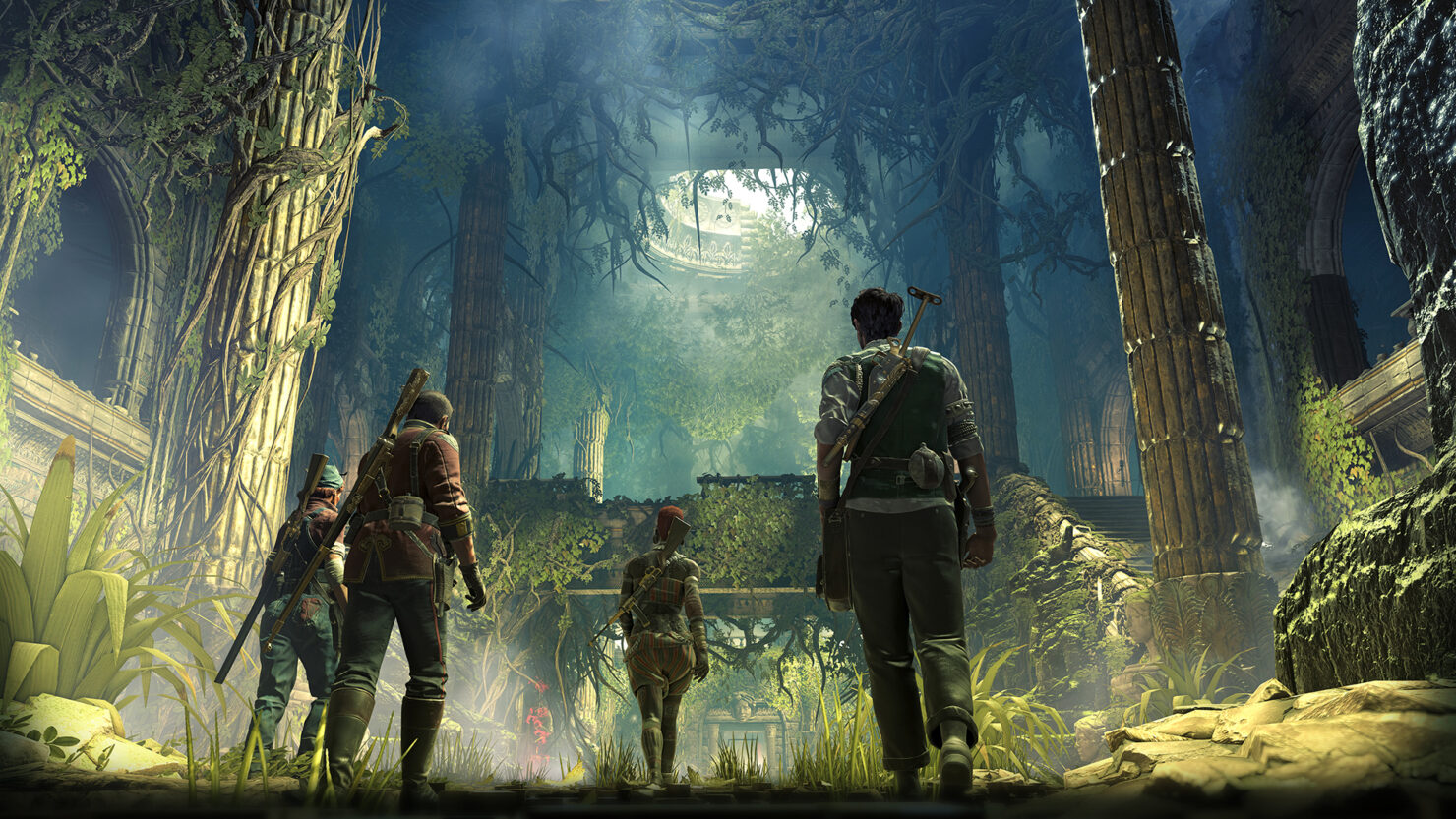 During our first day of E3, we had the pleasure of stopping by Rebellion Developments and trying out the latest hands-on build for Strange Brigade, a new third-person shooter focused on co-op action (albeit with a campaign fully playable in solo) set in the Threadbare 30's. This new co-operative experience is filled with derring-do, campy narration, and waves of the occult to blast away while searching for treasure. We enjoyed playing a four-player match with some of the development team and other media, followed by a brief chat with Steve Bristow, Lead Designer on Strange Brigade.

How long ago did Rebellion start working on the Strange Brigade project?

Well, with a lot of the projects we do at Rebellion, it starts with a prototype and then we examine that prototype and see what we’ve got and what we need to do to refine it. This project has grown out of a couple different variations of a basic thing. It would be fair to say that development proper on Strange Brigade started a couple of years ago.

So probably before they announced these expanded mid-step consoles, like the PlayStation 4 Pro and Xbox One X?

Yes, and there are enhancements for those in-game.

Can you list some of the enhancements you’re expecting for these newer consoles?

I’m not very technical, so I may garble this. The draw distance is increased, the fidelity of the shadows has also increased. It’s all outputting at 4K on those consoles, so it looks a lot crisper and smoother.

Is there a resolution difference between the enhanced versions, or is it all running about the same?

I think they will all output at 4K. We have the PC platform as well which is unlimited.

So the PC version will have an unlimited resolution and unlocked framerate?

Yes, I believe so but don’t quote me on that. You’ll need to speak to one of our technical guys.

How does the persistent progression work in Strange Brigade?

Well, the metagame is based around the arsenal of weapons that you have available and, in particular, the amulets that you can charge up and unleash special attacks. Over time, you will discover relic chests that will unlock relics and you’ll complete sets of relics. Once a set of relics has been completed, you’ll be able to unlock a new amulet for your character. Each character has four amulets, so by extension, there are sixteen amulets with our initial four characters. You’ll have to collect sixteen relics, but at the same time, you’re picking up gold and every time you open a chest, you stand a chance at picking up some gold that’s scattered around the world to encourage you to explore every little nook and cranny. There’s a lot to be gained from going off the beaten path in Strange Brigade and then coming back and replaying it. With that money, you’ll be able to unlock and broaden the arsenal of weapons that you have available, which can, in turn, be upgraded. There’s a hybrid weapon customization system where you can find gems and slot these gems into slots on the weapons. The more advanced weapons will have more slots, so you can combine these gems into all interesting ways.

The starting rifle that I used had two gem slots, so I was able to use one gem that did additional headshot damage that stacked on top of my character’s innate ability. If I managed to land a headshot, I would’ve done a lot more damage.

Yes, exactly! Each of the characters (it’s not class-based) has a unique set of attributes and making the player find ways to complement those attributes with their weapon and gem choices is part of what gives us a lot of player expression in the way you play Strange Brigade. You can drill down into quite a lot of detail setting that up.

I did see that we only have a small selection of weapons from the start, but I did see quite a few additional ones that could be unlocked with a significant amount of gold. Could you talk about some of those powerful weapons?

Broadly speaking, they fall into the categories like pistols, of which there are some more advanced ones that have gem slots. The primary weapon is going to be a variation of a shotgun, SMG, or rifle. The most powerful of those can have four gem slots. The weapons themselves will be more powerful, and then on top of that, you have more options for stacking these powers. We also have a whole set of prototype weapons that you can find in special weapon lockers which you’ll pay gold to unlock. They’re finite use weapons, like superpowers. You can hold them and use them when you want (they don’t consume an inventory slot) but once you use them up, they’re discarded. I can’t even remember off the top of my head how many there are, but there’s a whole bunch. There’s also a whole set of throwable items, which when combined with the special attacks, give you a very complicated palette of different powers to equip your character with over time and unlock as a reward for repeated play or more detailed play. If you want to get more gold out of a level, you’re going to have to explore every nook and cranny.

Some of the aspects are deliberately things that we want the player to learn about each level, so things like the shootable canopic jars will always be in the same place. The chest will, broadly speaking, be in the same place but the contents are randomized, so there’s a bunch of different things you can find such as gems, metafiction and external stories about the Strange Brigade and their backstories, as well as gold and potions.

Following back on the gems and how weapons have additional slots to stack, does that mean you can equip multiple copies of a single gem to increase the power of one specific ability?

Okay. I was looking at the possibility of using a submachine and having four of the gems that heal you when you attack then just charge forward and regain any hits you might have taken in battle.

For balancing reasons, we limit it to one of each type of gem so instead, your weapon will get good at lots of different things. You can build a weapon with the vampire ability, a damage increase and a headshot bonus and the ricochet effect or whatever else you like and make a weapon that behaves very different from the core weapons.

In terms of weapon handling, what form of aim assist or aides do you have for the console players?

There’s a system not dissimilar to Call of Duty: World at War’s ADS (Aim Down Sights) mode in order to fire, but the process of doing that will assist your aim as you zoom in. Beyond that, it’s up to you. It requires some skill if you want to be specific with headshots but it’s quite possible to play Strange Brigade by just spraying your way through waves. If you want to optimize, and you earn bonus gold for earning headshots, for instance, you’ll need to be precise. If you just want to play through the story and get through the levels, you’ll be able to do that too. It’s a game that has stuff in there for the hardcore player and speedrunner, but it’s a very accessible game as well.

For people that are looking for more challenge, do you have different difficulty settings for the levels?

Yes, there are different difficulty settings that mainly expresses itself in the amount of damage that enemies do to you but it’s also possible that the number of enemies will differ depending on if you’re playing solo or multiplayer. It’s possible to play solo but with multiplayer settings, meaning if you really want the challenge, you can put it on a higher difficulty and greatly increase the number of enemies. In a way, because of the nature of the amulet power and explosives, it’s not necessarily harder with more enemies, just more intense. It will require more energy as a player.

If you’re skilled with using your amulet power or grenades at the right time, you can mitigate massive groups with ease, especially when you layer in the traps as well.

Yes, quite. The environments are largely set up to be a playground for chopping up massive numbers of enemies very quickly. There are traps all over the place and like you said, combined with all of those tools, you can get through an intimidating crowd of enemies quite quickly.

Yes, it’s very much a single player game with co-op support. You can play the campaign from one to four players and you’ll get essentially the same experience. But, when you’re playing co-op, you’ll have the fun of playing as a team in a narrative campaign which is satisfying to play solo as well.

When you’re playing solo, will you have AI companions to fill the slots in the roster?

No, you’ve got to get friends to do that for you. It’s an online-only co-op game. The structure of the levels and puzzles are designed to all be completed solo, but you’ll have some advantages if you play co-op.

How long are you anticipating players to go through a campaign level from beginning to end?

I actually don’t know the answer to that. As you can see in the demo, you can do (a level) in ten to fifteen minutes but you can spend half an hour if you went and solved all of the puzzles. I don’t know if you caught every puzzle in that short section, but it’s a good indicator of how the rest of the game is. You can probably rush through in the whole demo in about six minutes but I’ve seen people take half an hour. I can’t give you an accurate count to one campaign level, but there’s considerable depth in the replayability as well. Just completing a campaign is only the beginning.

Do you have a rough idea of mission count for what will be available in the full game?

It’s a full campaign that’s substantial and comparable to our other games, like the Sniper Elite series. We want to give our players substantial content for their money and I think we’ve demonstrated that in the past. Strange Brigade is no different for us. The whole studio is pretty much working on it at the moment, so I don’t think players will be disappointed with the amount of content they’re getting.

How about content that’s coming later down the pipeline? I heard mention of other characters. Do you have other ideas in the works?

Yes, we have a season pass announced which is going to contain three DLC packs. Expect to see more of all aspects of Strange Brigade in those packs. Again, if you go back and look at what we’ve done with our previous games like Sniper Elite, we’re pretty generous with our DLC. We’ve developed a bit of a reputation for delivering a good value and we’ve put a lot of effort and time into it and we want it to be there to enhance and expand Strange Brigade and give it more longevity.

For gamers that want to get their hands on Strange Brigade, when will it launch?

It will launch on August 28th on PlayStation 4, Xbox One, and PC simultaneously.