All Android Devices Released After January 31, 2020 Will Have to Run Android 10

Android 10 has been around for little over a month, and it'll be some time before most eligible devices get to run it. It is common for OEMs to roll out a major software update for a smartphone more than a year after it was first released, as demonstrated by the LG G6. In one instance, users had had to wait for over fifteen months before a build was tested, let alone rolled out. Fragmentation is and will continue to be, the bane of Android's existence for the foreseeable future, and to be honest, there is only so much that can be done about it. XDA Developers looked at Google's documentation and found out that all devices released after January 31st will have to run Android 10 to get Google's stamp of authority.

Common sense dictates that Google requires newly released devices to run the latest version of Android, but the above measure is essential, as a lot of OEMs (especially one that rhymes with Naomi) often try to get away with shipping older software on their devices. Google's document outlines the deadlines in which OEMs/ODMs can submit software builds to Google to get approval for GMS distribution where GMS stands for Google Mobile Services. It is a package of Google apps, services such as the Google Play Store, and Google Play Services that make up the quintessential Android experience we know and love. 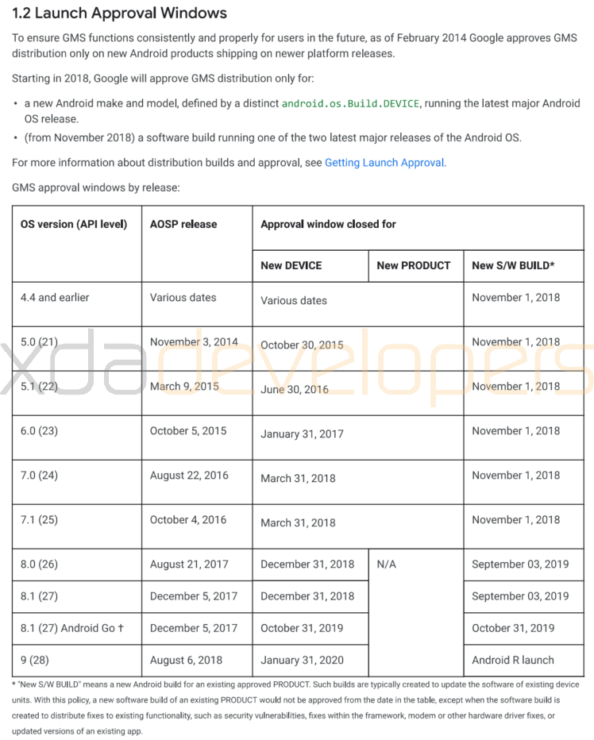 A device has to go through several requirements before they're certified for GMS apps. It is done on a device-by-device basis, and the approval process involves meeting the requirements listed in a bunch of documents. It is a long-winded process and can take months to complete. In essence, what this means is that OEMs can no longer ship devices released after January 31st, 2020, with Android Pie.

Short answer, probably not. Since the above restrictions apply only to devices released after the date above, the ones released before it are going to suffer as always. Three major software upgrades are only just becoming a thing, and it'll be years before it adopted industry-wide. So, we'll end up with just as many devices stuck on Android Oreo or Pie as the push for Android 10 will be focused on newer smartphones. The problem is further complicated by the fact that Google will still approve new software builds based on Android Pie for a few more months. This will go on till Android 11 is released, and that isn't happening until late next year.

It is a move in the right direction, though. A part of the reason for Android's fragmentation problem is due to lazy OEMs who can't be bothered to update their devices. By forcing OEMs to keep up with the latest version of Android, Google is ensuring that the problem doesn't get worse. A device without GMS certification won't do well as it cannot run critical services such as the Google Play Store. We all saw how that turned out for the Huawei Mate 30 and no company would willingly want to be there.