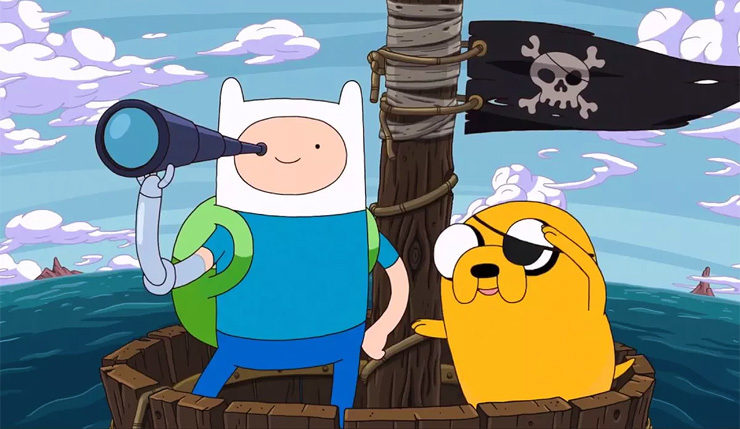 Cartoon Network’s quirky Adventure Time franchise has seen its share of video games, but they’ve all been a bit disappointing. Oh, sure, some Adventure Time games have been decent, but the series deserves more. Something big, bold, and truly adventurous!

Well, the newly-announced Adventure Time: Pirates of the Enchiridion could be exactly that. This is a full-fledged open-world RPG, that looks to take heavy inspiration from the classic The Legend of Zelda: The Wind Waker. Mathematical! Check out more details and a gallery of screenshots, below:

The game starts with a flooded Land of Ooo, in which familiar kingdoms are cut off from each other by rising waters. In their newly constructed boat Finn and Jake set sail to investigate what the junk went down. During their adventures Finn and Jake will recruit friends to join their crew, jump into swashbuckling fights, interrogate characters for clues, and traverse the dangerous sea to locations across Ooo.

Adventure Time: Pirates of the Enchiridion is being made by Climax Studios, the prolific developer behind everything from Silent Hill: Shattered Memories to Assassin’s Creed Chronicles, so definitely keep an open mind. Hopefully this is more than kiddie shovelware.

If you’d like to leave your fingerprint on the game, you can enter a contest to name Finn and Jake’s boat. Hopefully my very mature suggestion of “The Good Ship Soggy Butt” wins.

Adventure Time: Pirates of the Enchiridion boldly ventures onto PC, Xbox One, PS4, and Nintendo Switch in early 2018.

Adventure Time: Pirates of the Enchiridion Review – Shiver Me Timbers

Adventure Time: Finn and Jake Investigations Coming to PS4, Xbox One, Wii U and PC