Adventure Time: Pirates of the Enchiridion

Being one of the most famous animated TV shows of recent times, the Adventure Time series received several video game adaptations which are, for the most part, pretty much hit and miss. A true shame, considering some of the series' staples such as its humorous tone and its "adventuring" theme. After years of suffering, Adventure Time fans now have the game they deserve, Adventure Time: Pirates of the Enchiridion, an enjoyable role-playing which manages to capture the series' spirit properly, despite some issues here and there which damage the experience a bit.

Adventure Time: Pirates of the Enchiridion stars Finn and Jake as they set out to solve the mystery behind the flood of The Land of Ooo. Following a night of their usual fun together with BMO, the duo wakes up to find the whole land flooded. Their first step is to ask the Ice King about the matter, and it seems like he is indeed the one behind everything, as he has lost his crown. Setting out to recover the missing item, Finn, Jake, and later on, BMO and Marceline will find themselves involved in a struggle against pirates, who are going beyond the simple conquering of the kingdoms but are also influencing their inhabitants.

Adventure Time: Pirates of the Enchiridion's story is definitely one of the game's strongest features. It's lacking in the plot twists, but it is, without a doubt, quite enjoyable, thanks to the writing, which is as humorous as the TV show, and characters, who are as quirky as they can get. The whole pirate gimmick, while overused in video games, also adds a certain degree of wackiness, as it's quite fun to see Adventure Time characters suddenly become charmed by the pirate lifestyle and way of speech. Immersion is also quite good, thanks to the graphics which faithfully represent the typical Adventure Time aesthetics.

Adventure Time: Pirates of the Enchiridion gameplay is just like the story: enjoyable, but hardly original. On paper, the game offers an interesting take on the role-playing game formula. Following the flooding of Ooo, Finn and Jake can explore, thanks to their ship, the whole Land, disembark at certain points to complete main and sub-quests and collect treasure. The basic game progression is lifted straight from the Zelda series, with the whole flooding theme making the game feel like a lite version of The Wind Waker's exploration. Progression is also eerily similar to the recent God of War, with locations becoming available only after certain story parts have been cleared. In the end, Adventure Time: Pirates of the Enchiridion only feature an illusion of an open-world experience, as many locations are locked behind story progression. Thankfully, exploration is somewhat varied, as each location comes with a couple gimmicks which spice the experience a little, such as simple puzzles, stealth segments and more. The four playable characters also come with unique field abilities that are required to complete quests and find secrets: Finn can use his sword to destroy objects, Jake can turn into a scooter to speed up movement and so on. Interaction with NPCs is also limited, with only Interrogation Time, where Finn and Jake interrogate select characters to obtain crucial information, spicing things up in this regard. Sadly, there are no real consequences for failing to understand the characters' moods, so it feels like it has been implemented only for the comedy.

Unlike the Zelda series and God of War, Adventure Time: Pirates of the Enchiridion features a turn-based, tactical battle system, where Finn, Jake, B, O, and Marceline take turns to use regular attacks, special attacks, which require energy that is accumulated slowly each turn, defensive action, and items. At first, the choice of a turn-based battle system feels a bit out of place, given the Zelda series similarities, but it becomes clear, later on, that the team did know what it was doing, as even regular encounters can be a challenge if the player is not well prepared. All enemies in the game come with elemental and status weaknesses and resistances, forcing players to choose the right attacks to deal a decent amount of damage. Since the enemies hit hard, it's extremely important to choose the right action during each turn, as defensive actions can save the player from defeat. Adventure Time: Pirates of the Enchiridion also places extreme importance in items, as, unlike most turn-based RPGs, players can use an item and also take an action during the same turn with no penalty at all. Using items is extremely recommended, as they can be used for buffs and debuffs as well as healing. Given how hard enemies hit, players will be using plenty of items. Ultimate attacks are also especially important, as they can turn the tide of battle in a single turn

While the gameplay experience is fine for the most part, there are, however, some design and balancing issues, mostly tied to how character progression works. Characters get experience points after each battle and level up after a certain amount has been reached. Sadly, leveling up doesn't increase stats, but only the threshold up until they can be enhanced. Health, Block, Attack, Dodge, and Accuracy are actually improved by spending Dosh, which is the game's main currency. Stats for each character require a different amount of Dosh, so some characters have an easier time improving select stats. The main issue with the system comes with the fact that Dosh is also used to purchase items, and, as already said, they are quite important. With all battles being challenging, it's important to keep stats as close to the current threshold as possible while keeping a good stock of items. Dosh isn't particularly scarce, but battles just don't give enough to do this, forcing players to destroy every little object on the field in search of them. In the long run, this makes exploration a chore. One particular issue, additionally, also makes things more annoying that they should be, excessively long load times when losing a battle.

One area where Adventure Time: Pirates of the Enchiridion excels is its presentation. The game employs cel-shading to recreate the series' characters and locations, and it makes a damn good job in doing so, making players feel like they're actually playing through an episode of the TV show. Performance is also acceptable on regular PS4, with the game keeping a steady 30 FPS framerate most of the time. One important thing to note is that Adventure Time: Pirates of the Enchiridion also features the original series' voice actors, which helps immersion even more. The soundtrack is also in line with the TV show, using an interesting mix of modern instruments with classic 8-bit consoles sounds.

Adventure Time: Pirates of the Enchiridion is a difficult game to score. The game is a competent and charming role-playing game, but the lack of originality and some of the design choices hamper the whole experience for those who aren't exactly die-hard fans of the Cartoon Network show. There isn't anything inherently broken in the game, though, so there's no doubt that Adventure Time: Pirates of the Enchiridion will get its deserved share of fans.

Reviewed on PlayStation 4 (code provided by the publisher). You can purchase the game via Amazon. 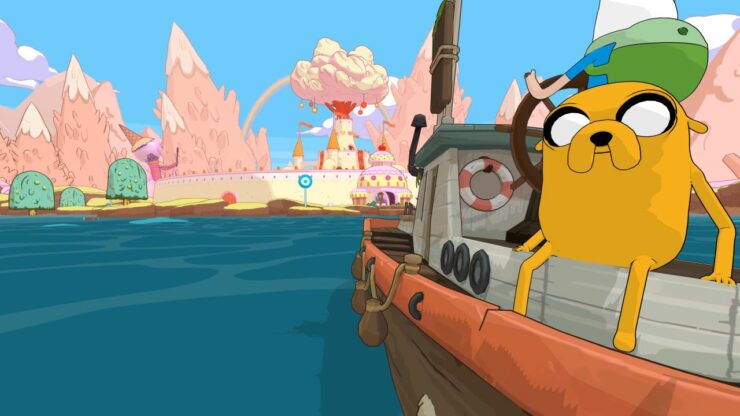 Adventure Time: Pirates of the Enchiridion is one of the best games based on the Cartoon Network show, thanks to the faithful representation of the series' charming world and characters. While quite derivative, with features lifted from The Legend of Zelda series in particular, the game developed by Climax Studios can be a fun experience, granted the player manages to overcome some frustration due to balancing and design issues.

Adventure Time: Finn and Jake Investigations Coming to PS4, Xbox One, Wii U and PC