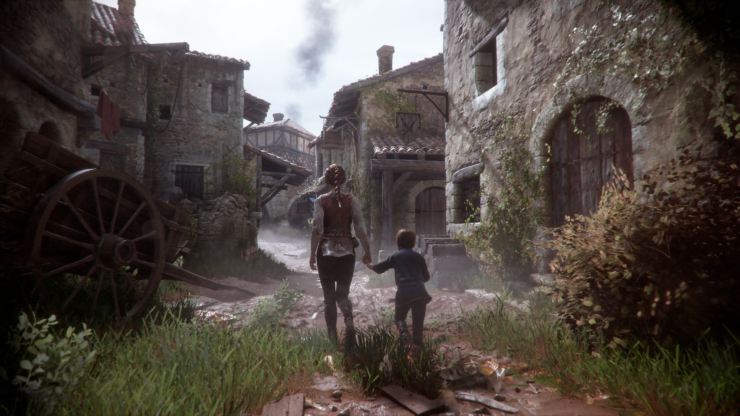 The streets of Paris were blanketed in thick fog when I arrived to play the first section of Asobo Studio’s upcoming dark adventure game A Plague Tale: Innocence. Gathered in a large room filled with fake rats crawling in huge throngs I had two hours to play the game covering the first four of the total seventeen chapters, and you can read my hands-on preview here. Afterward, I had the chance to sit down with David Dedeine, the CCO of Asobo Studios, to talk about the game in the same, now much scarier, rat-infested room. We talked about the inspiration behind A Plague Tale, the terrifying nature of the rats, and why they kept making me do terrible things to pigs.

A Plague Tale: Innocence is out on May 14th for PC, PlayStation 4 and Xbox One. 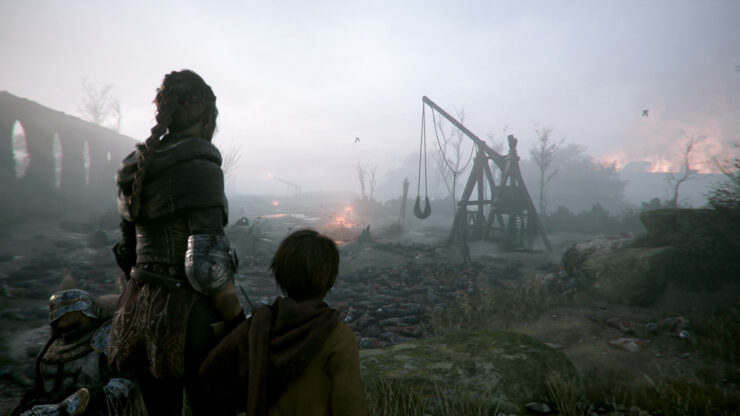 While the Inquisition soldiers are intimidating, the rats feel even scarier. Is this deliberate or just the natural consequence of the rat numbers and movement?

It's as we’ve said since the beginning: it's a trio. You know it's really about Inquisition, the rats, and the kids. Actually, it's interesting because even during the development the inquisition and the rats were competing with who was the scariest. The perception of the danger from both of them has improved all through development, even in tiny adjustments. That said we are still improving the rats a little bit. We’ve got layers for the rats that we are using, but I don’t want to tell you too much about how they behave until you see it for yourself. Basically, we thought they couldn’t get any better quite early on, but quickly realized we could make them even scarier.

In the demo I just played, you have to sacrifice the pig to progress, and last year you showed a scene where you force the rats away from you and towards a soldier. Why are you making the player the bad guy? Why are you making us kill these things?

It is a part of the cruelty of this world that we’ve built. I'm happy you’ve noticed this. But that soldier you mentioned from the battlefield? You can save him. But in this case the pig you can’t. I was actually talking about this to some of the playtesters and nearly all of them commented on the pig. Like ‘oh, poor pig’.

But yes, we know it's bad, which reinforces the dark world. But it also builds the relationship between Hugo and Amicia. It is not ultimately to torture something, even if it is a digital pig. It's for Hugo to see Amicia doing something to try and save their life, even if it's something bad.

So and we have tried all along, at every single moment of the game to keep this type of dark flavor, where to survive to have to make these type of decisions.

The way the rats spread an infection makes A Plague Tale: Innocence almost feel like a medieval reimagining of a zombie game. Was that a conscious inspiration for the team?

I would say yes and no. Obviously technically there is some inspiration for the genre. At some point, a rat has two hands, two legs, and a body and head and in order to make them move in a crowd, there is obviously something close to what we could have done in a zombie game.

But the rules of this world are not that of a typical zombie game. It's all about the sound of them and it's much more about light. And finally, even the way the player interacts with them from the beginning to the end of the game is nothing compared to the zombie genre, as far as I know. So we probably did touch on the zombie idea, but we pushed much past it.

There is a lot of folklore about rats, did you use any of that as inspiration for A Plague Tale: Innocence? Like the Rat King, for example?

There’s Little Red Riding Hood for example, and Hansel and Gretel as well. All these stories were told to the kids but you’re like, are you sure? It's really brutal and that kind of storytelling was one of the sources of inspiration from the very beginning of the concept for the tone of the game.

A Plague Tale: Innocence looks like it always had siblings at the heart of it, was that the first thing you started with when developing the game?

Yeah, definitely. To be transparent, the siblings were in before the rats which is surprising maybe. But we had to decide at the very beginning who we would frame this game, and we wanted to do it with siblings.

Even at the beginning when there are loads of ideas on the table and no one knows what we want to keep, everyone agreed we definitely wanted them. I know it sounds like the developer story which is nice to hear but it is what we've done and I think it has been the thing you can follow through the whole product.

At some point in the development, especially when working on the story, we realized that there were these moments when the character starts to be themselves. Like even before you think about it, you know what they’ll do and start changing the story because you know they would or wouldn’t do these things.

It's one of the things we're most proud of I think, the consistency of the character and really focus on something as awesome as this. At one point, the sequence in the village had much more combat in it, but we slowed it down because it was not right for Amicia to be as soon ready to kill people. I’m not sure if I’ve answered your question, but I’ve definitely answered something.

The way you interact with Hugo makes you bond with him really quickly. Was this something you spent a lot of time working on?

Yeah, definitely. We wanted the gameplay to reflect what happened to the psychological layer of the character, and that's the reason why the way the siblings interact with each other is so important. We want the player to feel close to Hugo. It's not the type of game to have really deep collaborative mechanics so I think where we landed is just right for us. It's sort of a reflection of the relationship in the gameplay itself. The moments where you have to send him off on his own you really feel his presence missing, and that is really important to the game.

So you started with the idea of siblings. When did you start using the light as an important gameplay mechanic?

Interesting. I don't remember exactly. I think it comes from what we’ve made on being grounded with the universe of what we know. We forget about it but this is before electricity and we don't realize exactly how dark it can be. Like when you see a power cut and suddenly you're like, “we're just fucked!” So we were working on this idea to give back some importance to the light and with the rats it just made sense. Because the rats, they’re not normal rats.

And in this concept of these two little siblings as these little candles in the middle of darkness, it felt like a good metaphor for the way the game was played as well.

Would you classify any of the moments of A Plague Tale as horror?

I would say we’re a little bit below horror I think. The attempt is not to make people feel the horror. Like the fairytales we were talking about earlier, it's not actually horror, it's something in between and we have tried to stick to this tone and to not go for go too much for gore or anything. This is one of the things we tried but we saw the way people interacted with some of it and it just wasn’t right for the tone of the game so we have removed most of it. If the game was a song, horror would not be one of the chords we used to play it. Maybe the melody would have some little bits of it and we are happy with this. We don’t want it to be a horror game.

And my final question: what's your favorite part of A Plague Tale: Innocence?

Okay, I will keep it simple to avoid spoilers but on my last playthrough, my favorite part was the last level actually. I was surprised to see how the level designers have done this awesome job, how the game works when you’ve got everything you can have in the game. And despite this, I think we've managed to keep the consistency I was talking at the beginning at the same time.

In terms of story, it was one of the levels I was most proud of and I was personally surprised. So at least in this moment of development it's my favorite but maybe you’ll ask again in one month, or you could have asked one month ago, and it would have been different. But definitely, right now, it's one of my favorite moments.

Okay, so the truth is when I was playing the last level I died like ten times. And when it's your own game you normally start to think too easy. But suddenly I needed to pay attention and it just wasn’t so easy. If nothing else it was great to look at what we've built and you take pleasure from it just like a final player would.

There are so many things I could tell you about my favorite things in Plague Tale that aren’t just about the last level. But what I will say is that what you've seen is just the beginning.