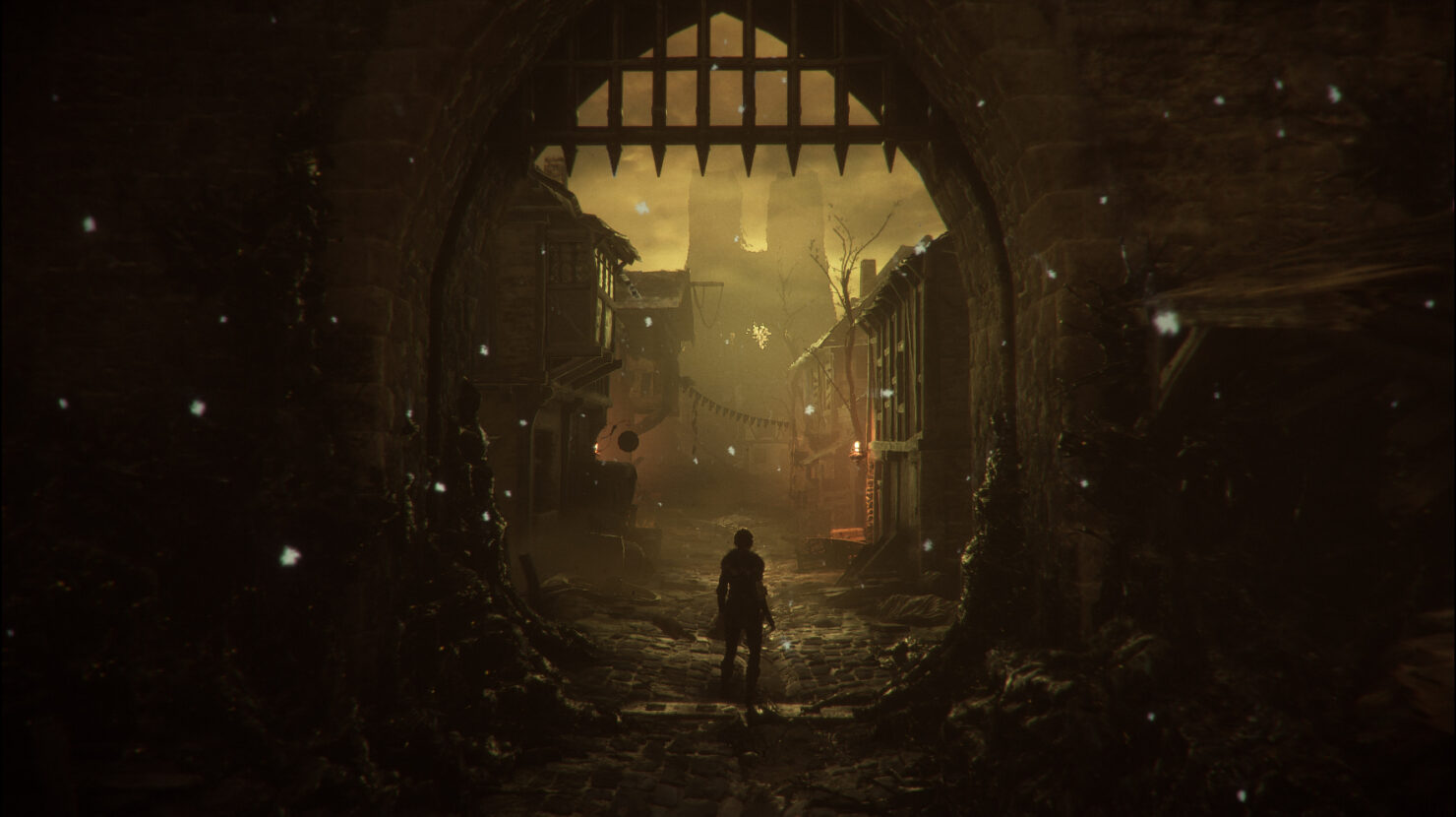 The first really exciting moment of A Plague Tale: Innocence comes at the end of the first level. After a surprise attack by the Inquisition, which obviously no one expected as usual, Amicia and her brother Hugo are chased through the surrounding woodland by the Inquisition's less than friendly foot soldiers. The chase is a lot like any cinematic chase scene in other games, but something quickly changes about it. The soldiers that are throwing spears and trying to block your path start to get attacked as well. You can see it happen all around and the atmosphere very deliberately changes as they start to scream and panic and ultimately run themselves. You don’t get to meet the rats that are assaulting them until a little later in the game where they’re given a proper introduction, but you do feel their presence, and it’s very well done.

For anyone that doesn’t know, A Plague Tale: Innocence is a dark adventure game about two siblings being chased across a war-torn, plague-riddled, and rat-infested version of medieval France. Coming out on May 14th, I had the opportunity to play the early levels of the game and meet the characters, explore the world and try to escape the rats. I've also interviewed David Dedeine from Asobo - you can read our chat here. 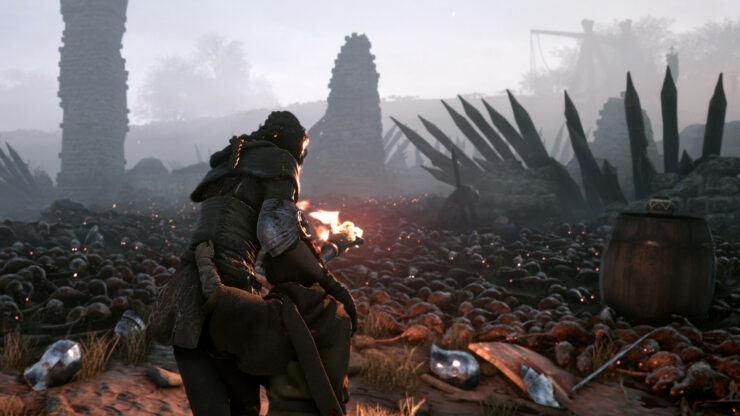 The relationship between the siblings is at the very heart of the game experience. As the older sister, you are responsible and ill-equipped to take care of your five-years-old brother in this dark world. At times it can feel a little like Life is Strange 2, where you try to explain the dangerous journey to a child that just doesn’t understand. But this game is a lot more hands-on, literally. Traveling across France, you’ll often be holding Hugos hand to keep him safe and close. Other times you’ll be carrying him on your back. These little touches help you connect with your annoying digital brother, and make it even more nerve-wracking when you have to let him go off on his own.

Because as I explained at the beginning, the world of Plague Tale is not a safe one. The game has two primary threats, the Inquisition and the rats. In later levels, the developers have shown how these two forces can be played off against one another, but in the sections I played, they were often dealt with apart. The rats are obviously the most terrifying part of the game, and with thousands on screen at once, rushing the children as a huge furry wave, their presence is deeply unnerving. You might think that the Inquisition would seem trivial compared to the swarm but that isn’t the case. Amicia is just a teenager and the towering stature of the soldiers does make them feel intimidating throughout your adventure, even if they are less terrifying than the rats themselves.

During the sections with the rats, the game took on an almost puzzle-like quality. The rats are scared of light, so Amicia must navigate the various locations carefully ensuring that the swarms cannot reach her, or her brother. Inquisition sections play more like stealth games as the two siblings creep past the soldiers rather than fight them. Amicia does have an upgradable sling, but this is more of a tool than a weapon. It's easy to imagine how these two aspects of the game can merge as the rats and soldiers start appearing at the same time. 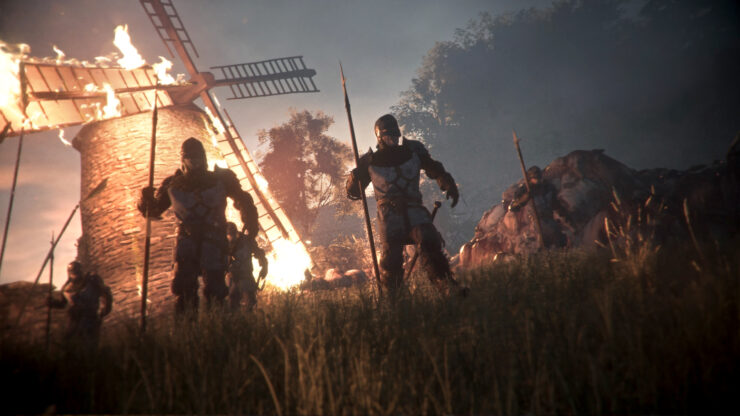 The game is filled with beautifully unpleasant moments. Towards the end of my demo, the duo had to enter a barn only to find it swarming with rats. With no light sources to exploit the team looks for some meat to distract the ravenous swarm, but all they can find is a lovable pig. Dragging the feed into the barn so the pig will follow is horrid but does well to reinforce the brutal nature of survival in the world. It also means that the answers you’re looking for won’t always be the easiest to find. Another moment has you timely sprints to match moving lightning sources that temporarily push the swarm back, and each one of these is really exciting.

And the visuals work really well. The way the rats move is at once hypnotizing and grotesque. The lighting is always warm, while the shadows are stark and hostile. There are a few touches up to the version I played that would improve the overall feel, but right now the core elements all work perfectly. Things like the movement animations while you’re holding hands are a little loose, as Hugo can spin around the player at lightning speed as you turn.

But the sound design needs no improvements at all. The music is nearly entirely done using medieval instruments to help immerse the player into this dark age. But even so, the music always manages to strike the perfect tone to match the action and inaction. When the sound becomes more modern is with the discordant shriek that tells you the rats are coming. It works well as the rats feel so alien and deserve this otherworldly entrance music.

Plague Tale is setting itself up to be a fantastic game. Exciting is the best word to describe it. Its never quite a horror game, but nor is it an action one either. While sometimes it feels like a puzzle game or a stealth game, you’re never not in danger and always feel like you’re pushing forward. The levels we’ve seen so far are all imaginative and varied in the way you move through them and view them. From the narrow and winding streets of a village to the open sprawl of a farm, each location has its own personality that is infected by the evil that swarms in the dark. If the rest of the ten to fifteen-hour adventure is as good as the opening levels, Plague Tale could become a great single player game. 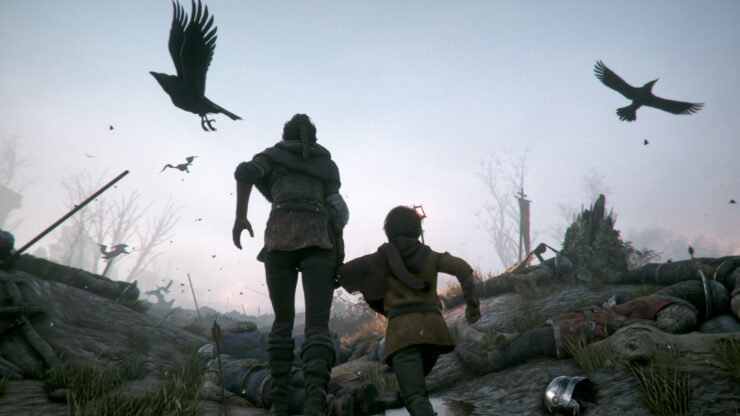