Games Workshop has found success with an impressively wide range of video game genres, and yet, there’s never really been a great first-person-shooter set in the Warhammer universe. A bit odd considering the franchise’s obsession with giant guns! Enter Necromunda: Hired Gun, the latest effort from Streum On Studio, who previously tried (and largely failed) to do the Warhammer shooter thing with 2016’s Space Hulk: Deathwing.

Necromunda: Hired Gun is arguably the most ambitious Games Workshop shooter yet, and borrows a lot of good ideas from other games in the genre, but is it the FPS breakthrough Hammerheads have been waiting for? Or should it stay buried in the Underhive? Grab your boltgun, it’s time to see how this one holds up under heavy fire…

Necromunda: Hired Gun casts players as a nameless bounty hunter who delves into the darkest, grimiest corners of the Underhive (a vast underground industrial zone on the planet Necromunda) in order to collect the head of whoever killed a powerful guild leader. All evidence points to a figure known as the Silver Talon, but their identity and motivation remains a mystery. Like most Warhammer adaptations, Hired Gun’s setting is much more interesting than the specific story it tells, even if that setting is basically just “Mad Max in space.” Despite a very limited cast of characters (you’ll meet maybe three or four people who actually matter) the game’s plot is still nigh-on impossible to follow. It constantly name drops characters you’ve never met and expects you to care about them, sight unseen, and none of its teased mysteries come to any sort of satisfying conclusion. Perhaps this will all mean more to hardcore fans of the Necromunda tabletop game, but those who haven’t been boning up on their lore will be lost.

In terms of gameplay, Necromunda: Hired Gun borrows from the best, shamelessly cribbing mechanics from the last couple Doom games. Like those games, Hired Guns focuses on fast, acrobatic combat with players being able to double jump, wall run, and grapple around arenas to their hearts’ content. Taking on enemies head-on is incentivized, as inflicting heavy damage and scoring melee takedowns will refill your life bar. In addition to Doom, Streum On Studio also casts a glance toward Borderlands 3’s Beastmaster class, as you can also summon an AI-controller cyber mastiff to maul your enemies.

It’s a fine setup, controls are generally responsive, and guns deliver a solid kick, but there are still some basic wrinkles that need to be ironed out. Melee takedowns have no cooldown, you’re invincible while they play out, and most rank-and-file enemies are terrible shots, so there’s really no good reason not to just charge headlong around the battlefield stabbing people. Eventually some enemy types get shields that make takedowns harder to abuse, but you’re pretty much given free reign in early missions.

Oh, and it pains me to say it, but your doggy buddy is a bit of an idiot. Playing as the Beastmaster in Borderlands 3 was fun because your sidekick had decent AI and could contribute to the fight without too much babysitting, but calling up your mastiff is usually a waste of time. Or at least it would be if Hired Guns’ devs hadn’t decided to tie the ability to highlight enemies to your dog. The fact that your dog is on a cooldown timer and you lose sight of highlighted enemies once he disappears just renders the whole mechanic somewhat irritating. But hey, enemy AI is almost as dumb as your dog’s, so ultimately, his uselessness doesn’t matter all that much.

In addition to the running and gunning, Necromunda: Hired Gun features a simple upgrade system. You’ll find weapons and gear stashed in treasure chests strewn around levels, and whatever you don’t want can be sold for extra money at the end of missions. Said cash can be used to improve both yourself and your mastiff back at Hired Gun’s hub city, with the game doing a good job of providing upgrades that feel like more than simple stat perks. Many of them genuinely change the feel and flow of the game, allowing you to do things like slow down time, auto-target enemies, or unleash powered-up melee attacks. By the end of the game, you feel like a pretty solid badass.

Ultimately, Necromunda: Hired Gun’s greatest strength, and weakness, is its level design. The game’s missions and locations are surprisingly varied – these aren’t just your standard series of kill boxes connected by corridors. From mission to mission you’ll find yourself battling through a massive out-of-control train, playing base defense, and even exploring grotesque survival-horror-flavored alien tunnels. The game does lose a bit of its unique flavor in its latter half, but still, I applaud Streum On Studio for throwing so much at the wall.

Unfortunately, creative ideas alone don’t always make for a good shooter. While Hired Gun does serve up some satisfying murder playgrounds, level layouts can often feel cluttered, unintuitive, and not conducive to that free-flowing Doom-style action. Hired Gun’s grubby visuals don’t help -- the game does little to tap the power of the PS5, with lighting being much less impressive than on PC and framerate noticeably stumbling on a regular basis. This isn’t just an aesthetic problem, as Hired Gun’s muddy, flatly-lit graphics often make it difficult to properly pick out enemies.

If I were to end this review here, you may be left with the impression that I found Necromunda: Hired Gun to be a flawed, yet still somewhat enjoyable experience, and maybe that would have been the case, if it weren’t for the game’s severe lack of polish. I don’t think I’ve ever suffered this many crashes reviewing a console game (at least 15 over the course of the campaign) and that isn’t even taking into account the numerous times I had to reset the game because I got stuck on an object or an event didn’t trigger. I could go on -- cutscenes are ridiculous glitchfests, basic features like aim assist are broken – but suffice to say, playing this game for any length of time starts to feel like a chore.

But hey, if you’re more tolerant than me, you can certainly sink plenty of time into Necromunda: Hired Gun. With a solid 7-to-10-hour campaign and tons of sidequests to pursue, the game measures up well to most other single-player shooters you could name. If only all that content felt like a reward.

This review was based on a PS5 copy of Necromunda: Hired Gun provided by publisher Focus Home Interactive. You can grab the title at a discount from Green Man Gaming. 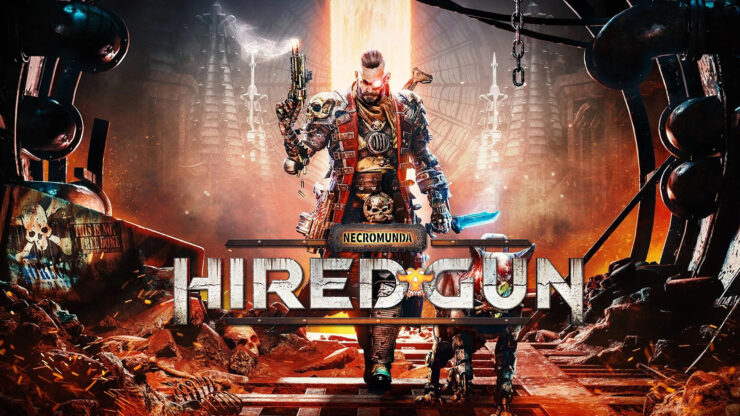 Necromunda: Hired Gun has a certain grungy charm and offers up some clever ideas, but unrefined core mechanics, messy level design, and a shameful lack of polish ultimately add up to Necro-no-fun-da. Hardcore Games Workshop fanatics might still find something to enjoy here, but I recommend you don’t hire this gun at anything but a steep discount.