Google likes to have its presence in a large array of market segments and sectors. The company isn't content with being just a search engine giant or a software provider, which is one of the primary reasons we saw it become a part of a larger conglomerate of companies known as Alphabet this year. One of Google's ventures is its Nexus smartphones, that offer users the experience of pure and unadulterated Android and we've been hearing quite a lot about this year's Nexus smartphones over the past couple of weeks. Well, you can add a selfie to that mix today. 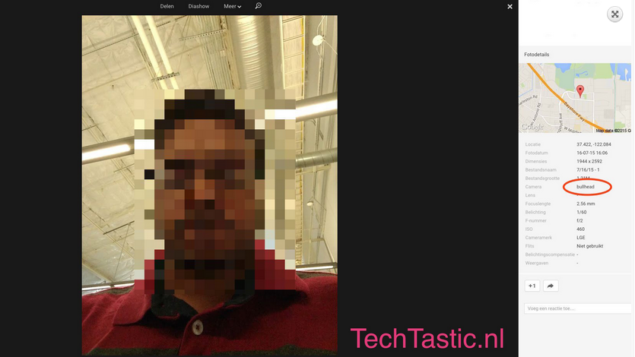 When it comes to leaks and rumors about upcoming devices, the categories of information which surfaces is usually fixed. We generally see component leaks, hardware specifications, renders and other similar details surface, with a couple of camera samples also having made their mark in the past. Well, a selfie has surfaced today, which appears to be snapped from the upcoming Nexus and you can take a look at the image above.

A Google Quality Assurance employee posted this image onto his Google Plus account, and according to the Exif data of the alleged image, its device of origin is a device codenamed 'Bullhead', also said to be the internal reference word of the 2015 Nexus. Its also snapped from an LG device, so in all likelihood its LG's prototype for this year's Nexus. But before you get all excited, Exif data can be manipulated, but why would a Google employee fake an image's data and upload it eludes us - unless its to generate more hype around the device.

Its location also shows that the picture has been taken at GooglePlex in Mountain View, so there's more evidence pointing towards the company. The front camera on the 2015 Nexus allegedly comes with a resolution of 5 MP and a good aperture size of f/2.0 according to the image, which should favor all those who love taking selfies on their gadgets. Stay tuned and let us know what you think in the comments section below.