At its launch event this October, Microsoft managed to take the notebook and tablet world by storm. A highly anticipated successor for the company's Surface Pro lineup was already on the cards before the event but that was not the only thing Microsoft had in store for us. Aside from the Surface Pro 4, Microsoft also launched the Surface Book, the company's first attempt at powerful, truly portable notebook. With the Surface Book you get some hardcore performance specifications coupled with a good design and the 1TB variant of the device is officially up for pre-order.

Microsoft's Surface Book With 1TB Storage Officially Up For Pre-Order

Microsoft's Surface Book builds on the company's older Surface Pro lineup and ends up adding a couple of critical features into the mix as well. While the Surface Pro lineup is focused more towards portability balanced with impressive hardware specifications, the Surface Book takes things to an entirely different level. The notebook comes with Intel's processors coupled with Nvidia's GPUs so that you're never short of that last bit of computing and graphics performance.

Its also portable, with the device's screen being detachable from the main keyboard, which should give users plenty of options when traveling with their device. The device's 13.5 inch display comes with a resolution of 3000 x 2000 with ample amount of RAM and storage for you to choose from. Microsoft's Surface Book comes with storage options of 126, 256, 512 and 1TB, combined with RAM options of 8 and 16GB. 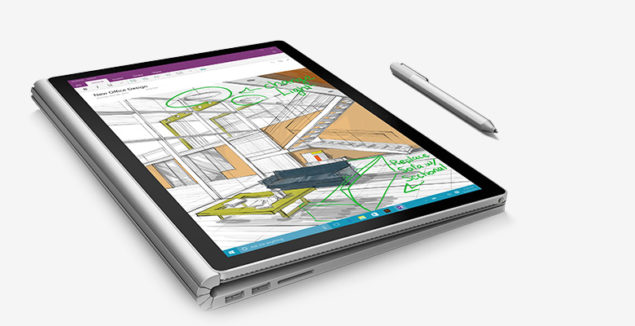 With such variety in specifications, the Surface Book has managed to catch the attention of a lot of potential users out there. And while pre-orders opened up soon after the device's launch, Microsoft still didn't open orders for the high end Surface Book i.e. the 1TB version. Well, if you were looking to book one for yourself, we've got some good news for you today. Redmond's opened up pre-orders for the device but with a hefty price tag, as was expected earlier.

The 1TB Microsoft Surface Book comes with 16GB of RAM and Intel's Core i7 on board, which should last you for quite a while if you're not a heavy user. And even if you are, Microsoft's made sure that its devices don't get outdated soon and until we see Intel upgrade its processor lineup, the Surface Book should keep you nice and happy. So head over to the link at the bottom for the 1TB Surface Book and let us know what you think in the comments section below.