After the releasing of its flagship smartphone, Nubia Z9, Chinese smartphone maker ZTE will be raising the bar with yet another device that the firm is currently gearing up to release; Nubia X8. According to Techgadgetsz, the mobile device is a force to be reckoned with in terms of display quality, aesthetics, performance and last but certainly not least, battery life. Armed with a mammoth 5,120 mAh cell, Nubia X8 might feature a battery that is less compared to Innos D6000 dual-battery setup (that makes the total mAh count go up to 6,000), but keep in mind, that is just a single battery present inside the upcoming flagship. 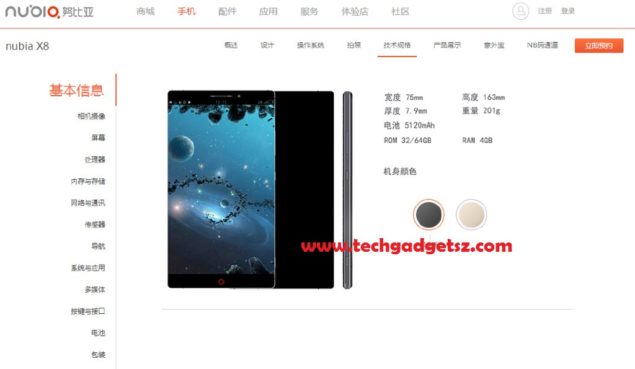 Nubia X8 Features A QHD Display On A Bezel-Less Screen, And 4 GB Of RAM

According to the source, in addition to being incorporated with a gargantuan sized battery, Nubia X8 also impresses in the remainder of the hardware specifications section. Starting off, the upcoming device is expected to radiate a QHD resolution, but the resolution on the website is measured as 2556 x 2440, instead of 2560 x 1440 pixels. Either the author made a slight calculation when resolution measurements are concerned, or Nubia X8 might have the crispiest resolution ever present in a mobile device.

Moving on, the smartphone is expected to possess a screen size that will measure between 5.5-6 inches, categorizing the handset under the phablet sized form factor. Additionally, the phone also features 4 GB of LPDDR3 type memory. For a handset that features the aforementioned RAM count, you folks can that its chipset and processor is not going to be a pushover. Unfortunately, the website has not disinterred any details revolving around those specifications.

Surprisingly, the smartphone is only assimilated with an 802.11 n Wi-Fi adapter, since a high-end device normally features an 802.11 ac adapter. The phone will be available to purchase in the 32 and 64 GB models, which can be expanded up to 64 GB through a MicroSD card. The absence of an 802.11 n adapter will be felt by several smartphone consumers, but ZTE will manage to make it up with a 4G LTE modem.

Earlier, ZTE also announced a $95 Android smartphone that featured entry-level specifications, but a sizable 4,000 mAh battery (ZTE Q519T, in case you guys forgot). Coming back to Nubia X8, the source did not care to provide details on when the device was going to be announced, but our guess is that more updates will come sometime before 2016. Till then, we will continue to provide timely info concerning additional leaks of Nubia X8.