XL Fleet Likely To Go Public in a Matter of Days by Merging With the SPAC Pivotal Investment Corp. II (NYSE: PIC) in the Latter Part of December

XL Fleet, a provider of electrification solutions for commercial and municipal fleets, is about to register a major milestone by going public.

As per the Form 424B3 filed by the Special Purpose Acquisition Company (SPAC) Pivotal Investment Corp. II (NYSE:PIC) on Tuesday, a vote by its shareholders on the 21st of December is likely to formalize the proposed merger agreement between XL Fleet and Pivotal, paving the way for the shares of the combined company to trade on the stock exchange.

As a refresher, XL Fleet is currently a leading provider of fleet electrification services in North America, with over 3,200 electrified powertrain systems sold and driven over 130 million miles. The company offers three types of powertrains – XL Hybrid (XLH), XL Plug-In (XLP), and XL Electric. For the XLH and XLP systems, an electric motor is mounted onto the vehicle’s driveshaft. An inverter motor controller and a lithium-ion battery pack are also integrated into the vehicle as part of the electrification overhaul. However, the company is still developing the XL Electric option – a fully electric powertrain driven entirely by batteries – as well as one based on hydrogen fuel cells. The company makes the following claims regarding its powertrains:

“The XL Fleet electrified powertrain systems capture and store energy during regenerative braking and subsequently deploy that energy into the driveline during acceleration, operating in parallel with the existing OEM drive train. In addition, XL's plug-in hybrid system offers the ability to supplement this energy via a connection with an AC electricity source, including a level 1 or level 2 charger. XL’s systems enable vehicles to burn less fuel and emit less carbon dioxide (CO2), resulting in increases of up to a 25-50% miles per gallon (MPG) improvement and up to a 20-33% reduction in greenhouse gas emissions.”

The following slides, sourced from the investor presentation deck of XL Fleet, give a thorough overview of the company's business:

Along with providing electrification options to a wide range of vehicles, including Class 7-8 tractor chassis and electrified refuse vehicles, XL Fleet also plans to offer charging solutions through the XL Grid service. In addition, its Electrification-as-a-Service solution would finance and manage vehicles, powertrains, as well as charging and energy storage systems. 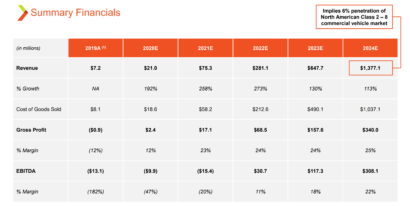