Tomorrow, Xiaomi will be looking to disrupt the heavy success of the Galaxy S8 as well as the mildly accepted and welcoming arrival of the G6. It is going to do that with the announcement of the Mi6 and its larger counterpart, the Mi6 Plus. Before the company divulges most of the important features of both these devices, the Mi6 has made its way to a specifications leak on GFXBench, highlighting which models could potentially be announced tomorrow.

The first thing we notice from the specifications at GFXBench is that Xiaomi could be looking to limit the performance of the base model of the Mi6 in the form of a processor speed reduction (the same thing it did with its Mi5 reveal). As you can see, one processor has been listed as running at 2.20GHz while the second one is rated at 2.40GHz. No doubt this belongs to the Snapdragon 835 because you can clearly see that an Adreno 540 GPU has also been listed.

Aside from this, we can also expect a higher RAM variant getting announced featuring 6GB of LPDDR4 memory, while the base version will come with 4GB RAM. If that was not enough, then how about different internal storage models? Looks like we will be getting those as well. According to the specifications, there is no mention of expandable storage which is not surprising considering it’s a flagship that belongs to Xiaomi. 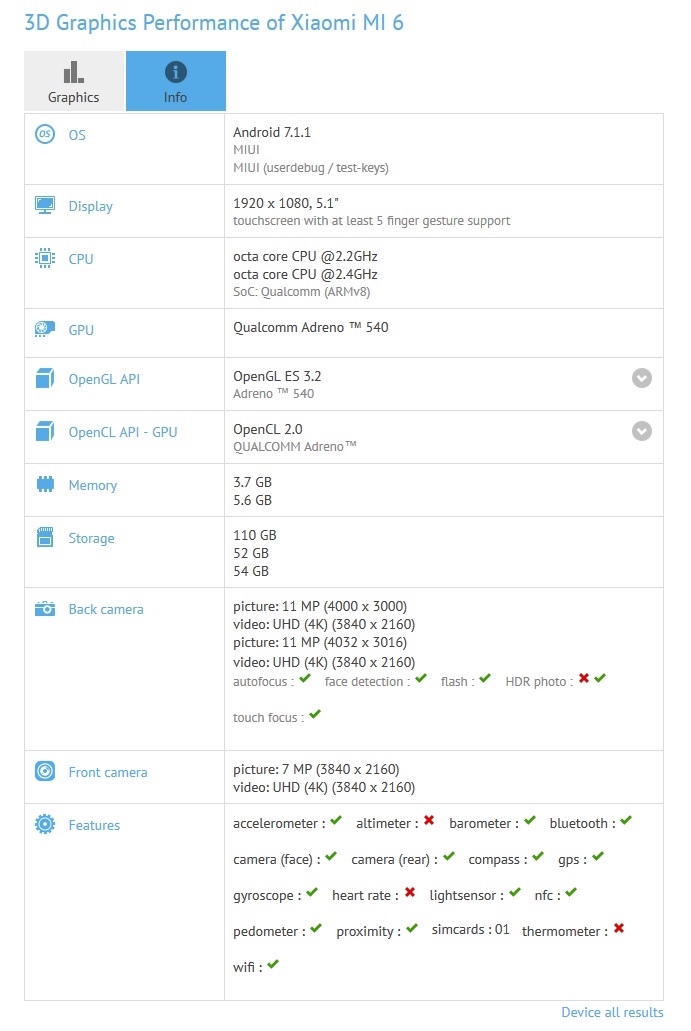 From what we can tell, consumers will have the option to purchase either a 64GB internal memory model or a 128GB one. Details on what sort of speeds these memory chips will be running at have not been defined but we do have a feeling that it will be running at the UFS 2.0 standard. For fans eager to see the level of effort Xiaomi has made towards the optics side, a 12MP dual-camera has also been listed and this setup is going to be paired with a single-lens touting 8MP front-facing shooter.

The resolution for this version is 1080p, but knowing Xiaomi, we’re bound to see a large battery and a competitive price tag.

What price do you think the company will lay down when it unveils the Mi6 and Mi6 Plus? Tell us in the comments right now.