Xiaomi Mi4c is the next smartphone which is going to be released by one of the most popular smartphone brands in the world. According to the details that we have come across, Xiaomi Mi4c is going to be released much sooner than you would expect, and what is even more exciting is that it will sport a unique feature that is not present on any other Xiaomi mobile device so far.

Xiaomi Mi4c To Be Released On September 24 But The Company Is Only Going To Keep Its Units Limited To 100,000

According to a leakster coming all the way from China, Xiaomi Mi4c is going to be released on September 24, after which consumers can purchase it starting from October 3. However, those who are actually serious about purchasing the handset will have to be extremely swift about it because the company has only ordered a 100,000 units to be made. The reason for that is quite simple which we will get to later but coming to the hardware side of things, Xiaomi Mi4c will sport a Snapdragon 808, and 2GB RAM underneath its hood.

One reason why the company is aiming to roll out limited units is because the company’s Redmi Note 2 happens to be doing so well, Xiaomi might actually jeopardize the sales performance of its highly affordably, yet impressive smartphone. Additionally, after Xiaomi Mi4c, we might actually get to see a Helio X20 version of Redmi Note 2, so the company could be saving up its capital for exactly that. Moreover, the rising Chinese smartphone OEM is aiming to reduce its dependency on Qualcomm and MediaTek by incorporating its custom cores in its affordable Redmi handset lineup.

In order to carry out its plan to fruition, the company will still need a hefty amount of money, which is another reason why the company could have decided to limit the number of units being made. As for the unique feature that we were talking about earlier, Xiaomi Mi4c has been leaked to feature a Type-C USB port, a port that is present on OnePlus 2. 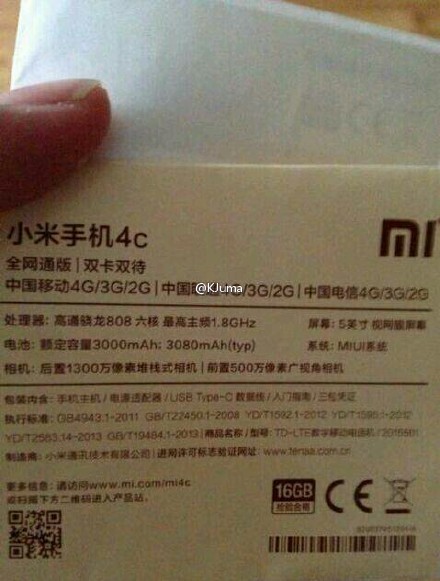 One advantage of having a Type-C USB port is that it will deliver improved performance when you are transferring content between Xiaomi Mi4c and other storage related paraphernalia. What do you think about this smartphone so far? Would you ever think of purchasing one or will you wait for the Snapdragon 820 powered Mi5. Let us know your thoughts.