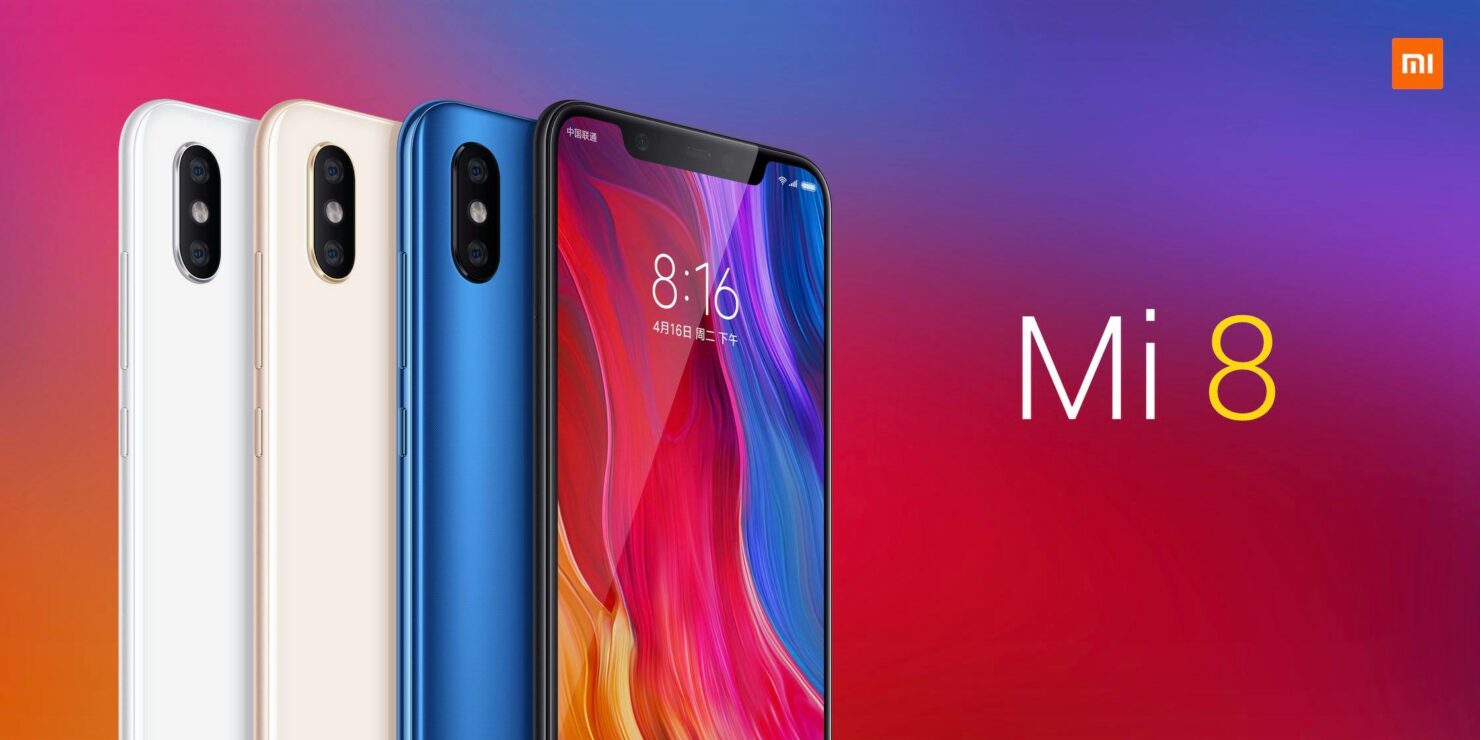 Xiaomi introduces not one, but three different flagships called the Mi 8, Mi 8 SE and the Mi 8 Explorer Edition. All three devices bring something different to the table but as a summary, we’ll say this. All three phones will cost far less compared to the premium flagships being sold right now but they feature pretty much everything when it comes to hardware and feature goodies, at least on paper.

The Xiaomi Mi 8, aside from the chin bezel, looks like an iPhone X clone. This is thanks to its vertically arranged dual-camera, to the front notch and its glass body. In terms of specifications, the Mi 8 is decked out because it features a very large 6.21-inch AMOLED display with an Always-On screen and a crisp resolution of 2,248 x 1,080. The screen-to-body ratio touches nearly 90 percent but more accurately, it comes in at 88.5 percent, with the brightness of the display going up as high as 600 nits.

According to the images, Xiaomi claims that the internals of the Mi 8 can allow the device to obtain a score of 301,472 in AnTuTu. Armed with a Snapdragon 845, the smartphone comes with 6GB of RAM along with storage variations of 64, 128 and 256GB.

Just like its predecessors, this flagship does not feature an expandable storage slot. What it does feature is a brand new security feature called 3D face unlock. Thanks to the notch housing infrared sensors and a camera, it will scan a 3D image of your face that will allow you to easily unlock it even in the dark while making it more secure in the end.

In terms of optics, the Xiaomi Mi 8 sports two 12MP cameras at the back with 1.4um pixels and 4-axis OIS. There's dual-pixel autofocus and AI-aided portrait mode added, along with AI capability for scene detection. Up front, there is a 20MP camera with 1.8um pixels and AI selfies and various beauty modes. You also get dual-frequency GPS on board the phone, which is much more precise than the common single-frequency GPS solutions and works much better in areas where there are several buildings.

The Mi 8 SE might not feature a Snapdragon 845, but it is the first smartphone in the world to come with a Snapdragon 710 (if you want to learn everything about the latest chipset, you can read about it here). In terms of other specifications, it comes with a smaller 5.88-inch AMOLED display with a 12MP + 5MP camera combination at the back. The remaining specifications are in line with the Mi 8 so we will not be getting into those details.

The Mi 8 Explorer Edition might be more or less the same as the Mi 8, but it comes with an in-display fingerprint reader (we have explained everything there is to know about in-display biometrics here). This smartphone is also completely decked out and comes with 8GB of RAM along with 128GB of storage. However, you will have to pay more for it because it is going to cost you CNY3,699 (approximately $577).

With all devices carrying a price that is less than $600, it surely makes them a better purchase if you want something that will go easy on your wallet. However, Xiaomi has not said anything about the smartphones coming overseas so we will have to wait for this announcement. In terms of specifications, features and other details, do you think all three will be able to cater to a different market? Tell us down in the comments.