Apple might have sold more units in the smartwatch category as compared to the entire phalanx of companies that shipped out Android Wear smartwatches in a single year but it still lacks behind one tech firm. Xiaomi, one of fastest rising companies on the planet has a 24.6 percent market share in the wearable market, according to the latest report published by IDC. The company’s Mi Band, a wearable designed to cater to the needs of the fitness eccentric might have only sold 2.8 million units, but for the price of $14.99, it’s a product that goes easy on the wallet, and is creating problems for numerous other players in the wearable industry. 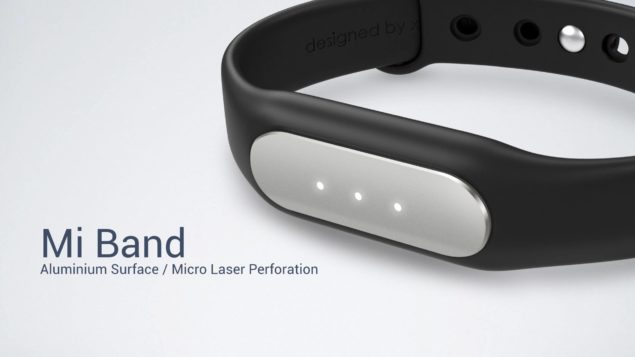 Xiaomi Is Currently Trailing Behind Fitbit, Which Leads The Wearable Market; Samsung Yet To Gain Momentum

The reports states that during Q1, 2015, Xiaomi reported a 24.6 percent of the wearable device market. While those are impressive figures, the company still trails behind the king of the market, which happens to be none other than Fitbit, which is reported to have a 34.2 percent market share for the same quarter. Samsung’s smartwatch sales was sufficient enough to hold a 5.3 percent for Q1, 2015, while companies like LG, Motorola and Pebble have yet to be listed separately.

According to Ramon Llamas, who is the research manager stationed at IDC, states that:

“Bucking the post-holiday decline normally associated with the first quarter is a strong sign for the wearables market. It demonstrates growing end-user interest and the vendors' ability to deliver a diversity of devices and experiences. In addition, demand from emerging markets is on the rise and vendors are eager to meet these new opportunities.”

“What remains to be seen is how Apple's arrival will change the landscape. The Apple Watch will likely become the device that other wearables will be measured against, fairly or not. This will force the competition to up their game in order to stay on the leading edge of the market.” 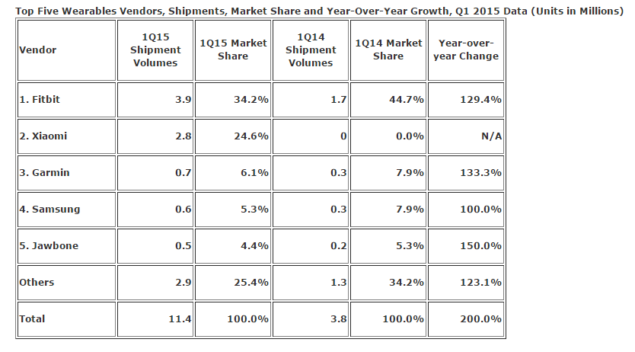 Overall, the wearable device market was able to record its eighth consecutive quarter of steady growth for Q1, 2015. Statistical reports state that a total of 11.4 million wearables were sold through vendors, which is a 200 percent increase compared to the 3.8 million unit tally that was recorded in Q1, 2014.

Xiaomi recently announced the successor to its original Mi Band, and has added a contactless payment making feature that will rival that of Apple Pay. Currently, there is no word on when the wearable will be released, but as far as progress goes, Xiaomi has a lot going for it.