World of Warcraft: The Burning Crusade Classic assets have recently been added to the 1.13 Classic PTR and the new build now also contains a date and Ray Tracing string.

As spotted by well-known World of Warcraft dataminer @Marlamin, the Public Test Realm for Blizzard’s vanilla server option recently received an update that includes Burning Crusade assets. From the looks of it, the assets appear to show off the interface for character cloning and support for multi-era servers on Classic. As mentioned by Blizzard during last month’s BlizzConline event, Classic players will be able to clone their ‘Classic’ era characters for use in Classic as well as TBC Classic for a fee. 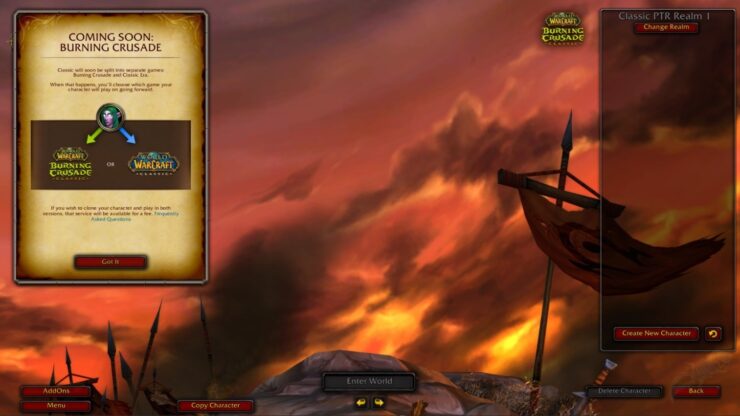 Another interesting thing that was found in the updated PTR build is a date string for the which might be related to the release date of the Burning Crusade pre-patch release date on the Classic servers – May 18, 2021. Of course, as with many date strings, this could merely be a placeholder date, but we wanted to share it nonetheless.

The updated global strings on the PTR now also mention various Ray Tracing options, which might indicate that the new Burning Crusade Classic client will be based on the World of Warcraft: Shadowlands client complete with support for Ray Traced shadows. The strings also mention gamepad bindings –  a new addition that was introduced with Shadowlands as well. It should be noted that, at the moment of writing, these new options aren’t available on the PTR just yet.

World of Warcraft: Burning Crusade Classic was officially announced during BlizzConline last month. The classic server option for World of Warcraft’s first expansion is launching later this year. Recent rumors suggest that the game’s closed beta will soon be kicking off.

Before the launch of Burning Crusade Classic, players will have the opportunity to move their existing characters to an Era realm for free. Blizzard will also be offering paid character boosts to level 58.