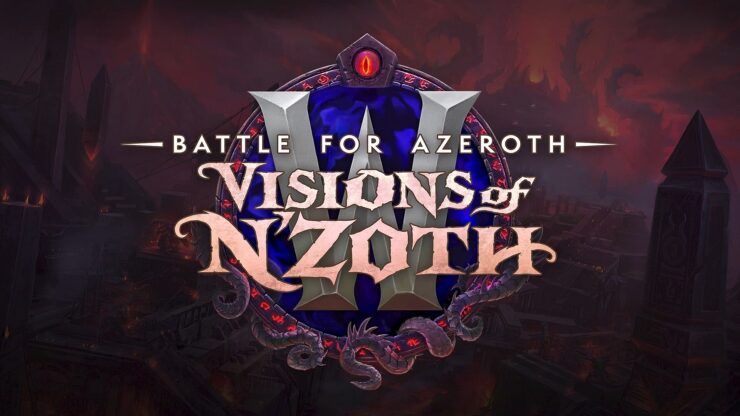 Blizzard has just released World of Warcraft's Patch 8.3, titled Visions of N'Zoth, which brings the Battle of Azeroth expansion to a conclusion with the addition of the last Old God.

Players will see and feel its influence spreading across various areas, before heading to his lair in order to defeat him once and for all in the raid content.

Additionally, two new Allied races have been made available. Horde players will get to unlock the Vulpera race, while the Alliance sees its ranks bolstered by Mechagnomes.

Below we've added the highlights of this Patch. For the full changelog, check out the official website. As a reminder, the next expansion, titled Shadowlands, will release later this year.

The Old God N’Zoth has been freed from his titanwrought prison, unleashing destruction and terror across Azeroth. N’Zoth’s forces are gathered to lay siege on the titan facilities in Uldum and Vale of Eternal Blossoms. If these ancient defenses are ruined, N’Zoth will turn his nightmare visions into reality.

Delve into where nightmares dwell in Ny’alotha, the Waking City, a 12-boss raid set in the Void-shrouded heart of the ancient Black Empire. Confront mad heralds and inscrutable horrors, and ultimately go eye-to-eyes with N’Zoth himself in a fateful battle for Azeroth’s survival.

Assaults: The Servants of N’Zoth

Level 120 players will witness the overwhelming might of the Old Gods firsthand in new Assaults on titan facilities in Uldum and the Vale of Eternal Blossoms. Players must drive back N’Zoth’s minions by completing objectives in the area, including defeating enemies and rare foes, looting treasures, and participating in events. After making some progress, you will face the lieutenant leading the enemy’s forces and, once victorious, you will be rewarded with a powerful piece of equipment and a Vessel of Horrific Visions, a key that gives you access to a new feature: Horrific Visions.

Assault locations will rotate within Uldum in Kalimdor and Vale of Eternal Blossoms in Pandaria, so be sure to check the bottom left of your map (hotkey: m) for the burning eye of N’Zoth to see what foes you face today.

While taking part in Assaults, you’ll also be able to earn two new reputations: Uldum Accord and Rajanni. Each faction will provide new rewards that can be purchased. Players will also be able to enter Lessor Visions of N’Zoth while Assaults are active. These can be entered solo or with a group and provide a window into the future that will put your sanity and skills to the test as you progress through it. Make sure to watch your sanity bar and work with your team.

Horrific Visions are instanced challenges for 1 to 5 players that give you a glimpse at the twisted future N’Zoth has in store for Orgrimmar and Stormwind. While experiencing a Horrific Vision, your sanity will be under constant attack, increasing the instance’s difficulty—and forcing you to leave before you’re consumed by insanity.

Each time you’re subjected to a Horrific Vision, you’ll leave with more knowledge and fragments of N’Zoth’s corruption. Take these to Wrathion and MOTHER Silithus to strengthen your defenses and earn new tools, which will allow you to delve deeper into N’Zoth’s Horrific Visions and earn greater rewards.

Visions of N’Zoth brings the resourceful vulpera to the Horde and industrious mechagnomes to the Alliance. As with other Allied Races, unlocking each race will reward you with a unique mount, and leveling a new vulpera or mechagnome from 20 to 110 will earn you their special Heritage Armor transmogrification set.

Horde players can unlock the vulpera by completing the Vol’dun level-up story line and reaching Exalted with the Voldunai. Alliance players who are Exalted with the Rustbolt Resistance and have completed the Mechagon story can embark on a quest line to create a mechagnome of their own.